Amani Fathima’s family is awaiting her return from Syria. Will the Centre help?

Fathima had gone to Syria with her husband, Hussaifa, and their son Kisar in 2014 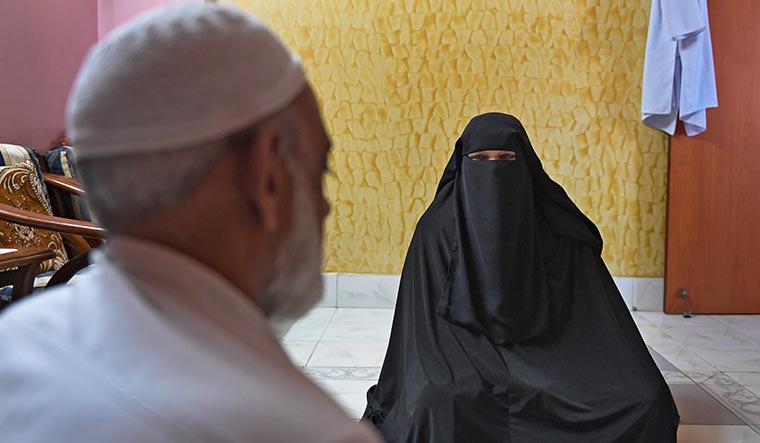 Hoping for the best: Nazeem Ahmed and Husna Ara at their apartment in Mumbai | Amey Mansabdar

A FEW HUNDRED metres from the bustling Kurla West railway station in Mumbai is a quiet old building called White House. It is a block of typical middle-class apartments, with a facade of shops and a rear entrance that leads to apartments above. When I entered the building on a Wednesday afternoon, there was hardly any light in the foyer. The name board listed the person I was looking for: Nazeem Ahmed—602.

A creaky elevator took me to the sixth floor. I knocked on a wooden door screened by a sturdy grille, and a frail man in blue lungi, white shirt and kufi cap came out. A woman wearing a headscarf peered at me from behind him. “Amani Fathima,” I said. The man let me in, and the woman began to cry. “Do you know Fathima?” she asked.

Nazeem Ahmed, 62, and his wife, Husna Ara, 54, had last heard from their daughter-in-law five years ago. Amani Fathima had gone to Syria with her husband, Hussaifa, and their son Kisar in 2014. They had two more children, Yahya and Ayisha, after joining Islamic State. Hussaifa died in 2018, when IS was fighting to retain its strongholds in Syria.

Nazeem and Husna knew their son had died, but they did not know where Fathima and the children were. As Husna sobbed, her daughter Saba came to her side and held her. When they looked inquiringly, I showed them pictures of Fathima and the children at a camp for IS refugees in Al-Hol in Syria. THE WEEK had visited Syria last December and had spoken to Fathima. She had told me that she wanted to leave the camp and return to India.

Husna let out a wail as she saw the picture. Saba consoled her and told me, “Meri bhabi itni khubsurat thi [My sister-in-law was so beautiful].”

As I told her what had happened to Fathima and how desperate she was, they listened in silence. Even after I finished, the silence lingered. “Hai Allah!” said Nazeem, after a while.

A mechanical engineer, Hussaifa had been working in Bahrain. “He took Fathima and Kisar in September 2014, promising to come back for Saba’s wedding on November 8, 2014,” said Nazeem. “But we lost contact on November 1, 2014.” 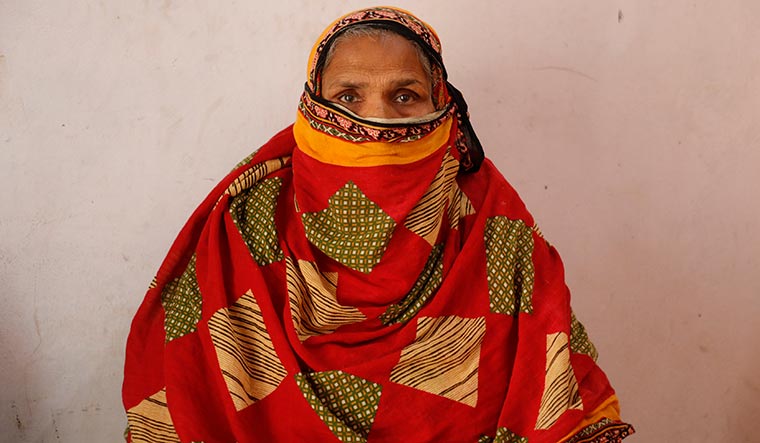 A former crane operator in the Mumbai port, Nazeem was the sole breadwinner of the family till 2012, when Hussaifa graduated from Rizvi College of Engineering in Mumbai. “He was very intelligent,” recalled Saba. “He travelled to America to present papers.”

According to Husna, Hussaifa was amicable and level-headed. “He was silent and intelligent and kept his head down,” she said. “He would not even get involved in an argument.” Apparently, Hussaifa wanted the family to move to Bahrain. “He made passports for all of us,” Husna said.

Things, however, changed drastically when Hussaifa failed to return for Saba’s wedding. “We tried hard to reach him over the phone,” said Nazeem. “But there was no response when we contacted the number we had. We did not have any relatives in Bahrain to ask for help.”

That Hussaifa had not even tried to reach them upset his parents. “Mother went into deep depression,” said Saba. “She cried nonstop thinking of bhaiyya and bhabi. So we burnt all his photos.” 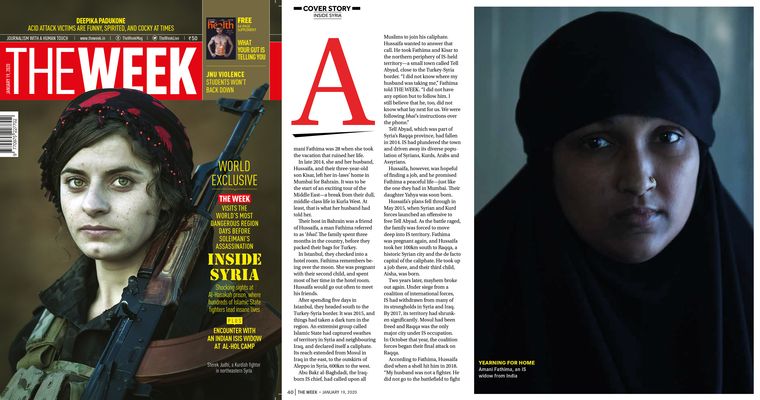 Photo of Fathima, as featured in THE WEEK’s Syria cover story published in January.

Though memories of him still burn, the family wants Fathima to return. Nazeem has written to the Maharashtra State Minorities Commission, seeking the government’s help in reaching out to authorities in Syria. The family is waiting for the day when Fathima and the children would be back home.

Hundreds of kilometres from Mumbai, an uneasy calm prevails in Chichori, a village near Azamgarh in Uttar Pradesh. It was a misty Saturday morning, and the smell of cow dung filled the air. Clad in a ragged salwar kameez with a veil around her head, Mushtari Bhanu met me in her house. I showed her a picture of Fathima and asked whether she knew her. Mushtari, who is in her late sixties, was speechless for a minute as she looked at her daughter.

I asked Bhanu whether she wanted Fathima to return. “Of course, I want my daughter to come back home,” she said. “But how can I get her back? What can I do at this age?”

Her two sons also looked helpless. “We had lost contact with her in November 2014,” said Harsha, Fathima’s elder brother. “We asked her in-laws to approach the embassy to trace them, as we believed that they had gone missing. But the in-laws did not do it, fearing that the result would be tragic.”

According to Harsha, Hussaifa married Fathima soon after he graduated in 2012. The nikkah took place in front of the house, on a floor coated with cow dung. “The wedding was a small affair,” said Bhanu. “Our daughter lived a good life in Mumbai till she went to Bahrain.”

According to her, Fathima grew suspicious of Hussaifa two weeks after reaching Bahrain. “She told us that Hussaifa was learning Arabic,” said Asraf, the younger brother. “But we thought it was natural; there was no harm in learning a language.”

Even when Hussaifa took her to Syria in 2014, Fathima apparently believed that he was searching for a job. She called Harsha from Tell Abyad, a town on the Turkey-Syria border, and told him that they were in an alien land and that it was scary. “After that, we lost contact,” said Harsha.

A sense of helplessness plagues Fathima’s mother. “What can we do now? She is married to another family,” she said. “I thought Fathima would live a peaceful life if she married into a relative’s family. But now my daughter is suffering, and nobody can help us now.”