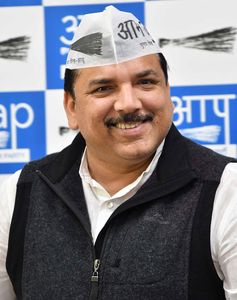 Q/ What does the Aam Aadmi Party’s big victory signify?

A/The results are a thumbs up from the people of Delhi for the work done by the AAP government in the last five years. It is also an affirmation of the fact that Arvind Kejriwal is not a terrorist but a “kattar deshbhakt [staunch patriot]”. Our rivals even said that the election is like an India-Pakistan match. I want to say that the match is over, and India has won.

Q/ Is it a validation of the party’s strategy to seek votes on the basis of the work done?

A/Definitely. We went to the people with our report card. Kejriwal clearly asked the people of Delhi to vote for the AAP only on the basis of the work done by our government. He even said that they should not vote for us if they were not happy with our work. It was for the first time that any chief minister had sought [votes] on the basis of the work done.

Q/ The BJP ran a campaign focused on Shaheen Bagh.

A/Shaheen Bagh [strategy of the BJP] failed. All the divisive issues they raised failed badly. They got all their bigwigs to campaign in Delhi. Amit Shah got his 300 MPs, the entire Union cabinet and chief ministers to campaign in Delhi. He got allies like Nitish Kumar, Ram Vilas Paswan and Sukhbir Singh Badal also to pitch in. It became “Kejriwal vs all”. They used all kinds of means, including money and liquor, but all of it failed.

The people wanted to know their vision for Delhi for the coming five years. But they focused on what turned out to a complete non-issue.

Q/ Will the AAP now make an effort to become a national force?

A/This is something that the leaders of the party have to decide. We will decide on a case-by-case basis [on] which states we will focus on in terms of expanding the organisation and fighting elections. A lot depends on the people of the country.