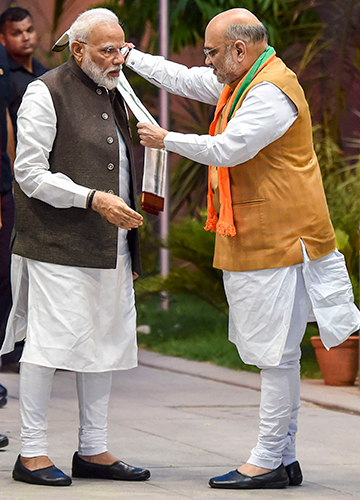 On March 18, 2018, more than 20,000 RSS workers assembled in Pokhran, Rajasthan, to celebrate the 20th anniversary of the nuclear tests conducted by the Atal Bihari Vajpayee government. The congregation was called Jagrut Hindu Mahasangam (Awakened Hindu Meet), a not so subtle religio-cultural significance attached to the country’s nuclear deterrent.

Vajpayee, the first prime minister from the BJP, had authorised the tests within two months of his coming to power in 1998. The twin tests conducted on May 11 and 13 removed nuclear ambiguity from India’s strategic doctrine, but it came packaged in a cultural subtext. For the saffron ecosystem, the tests were the response of a country which has been under attack from foreign rulers for the past 1,000 years. It finally had a brahmastra to protect itself.

The tests, however, invited economic sanctions from across the world. Vajpayee tapped into nationalist sentiment among NRIs to gather Rs450 crore through Resurgent India bonds. India’s aspirations—unleashed by the economic reforms of 1991, but left politically adrift by a series of unstable governments—found an ideological anchor in Vajpayee. India’s rightward shift in politics which started with Vajpayee has been reinforced in the past six years of the Narendra Modi government. Modi has been pushing the ideological agenda through his policies and by firmly keeping public opinion favourable.

Within two months of assuming charge as prime minister for a second time, Modi did a Pokhran-like strike by abrogating Article 370, which bestowed special status to Jammu and Kashmir. It has been a pillar of the BJP’s ideological commitment since its formation. Despite the hardships faced by Kashmiris, the imprisonment of its political leadership and the disruption of communication systems, Modi’s decision found support from across the country.

The BJP raised the issue of Article 370 during the assembly election campaigns in Maharashtra and Haryana, but with limited electoral success. But its ideological resonance was much more pronounced. Even a few Congress leaders supported it to stay politically relevant. “There is no way we can explain to people the need to keep Article 370 a part of the Constitution,” said a Congress spokesperson. “But we have a historical responsibility. As it was promised by our leaders [like Jawaharlal Nehru], we opposed it in Parliament. We had to record our dissent for documenting it in history.” Modi’s ideological pushes, be it the National Register of Citizens (NRC), the Citizenship Amendment Bill (CAB) or the Ram temple, saw little protest on the ground. Critics of the CAB see the passing of the bill as a major ideological assault on the secular character of the Constitution. For BJP supporters, however, it is like creating a holy land for the Hindus just like Israel had done for persecuted Jews from across the world.

The similarities between Vajpayee and Modi end in the way they pushed their ideological agenda. Vajpayee was groomed in the Nehruvian conciliatory style of parliamentary politics, but Modi’s political training happened largely during the anti-Emergency protests and the even more polarising Ram temple agitation led by L.K. Advani.

Enabled by the brute majority he enjoys in the Lok Sabha, Modi pushes his agenda with force. Policy rollbacks and engagement with the opposition are rare. The public opinion is managed with Modi taking ownership of the policies and his cabinet colleagues and the party machinery taking responsibility for reinforcing them. Demonetisation is a good example of this strategy. Despite the hardships, people endorsed the move as it was presented as a nationalistic endeavour. 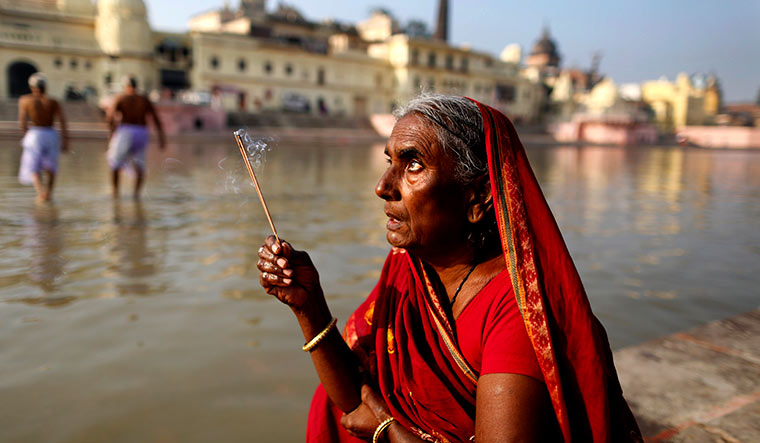 In the name of god: An elderly devotee in Ayodhya. The construction of the Ram temple will cement Modi’s position as Hindu hriday samrat | AP

The intrinsic feature of the Modi government has been the influence exerted by the RSS in pushing through the nationalistic agenda, unlike the Vajpayee regime where the sangh was often at loggerheads with the prime minister. Association with the 95-year-old hindutva organisation is now a key qualification for anyone seeking respectability and faster career growth. The RSS has shed its reticence and has grown more vocal. Sarsanghchalak Mohan Bhagwat has started engaging with the English-speaking intelligentsia, which has always viewed the sangh as an obscurantist organisation.

One of the key elements of this rightward shift has been the attempt by the sangh to replace the left ecosystem and Nehruvian institutions by promoting alternative icons “ignored” earlier, like Vallabhbhai Patel, B.R. Ambedkar and V.D. Savarkar. It has set up think tanks and also promotes film festivals, lit fests and book fairs which disseminate its core values. 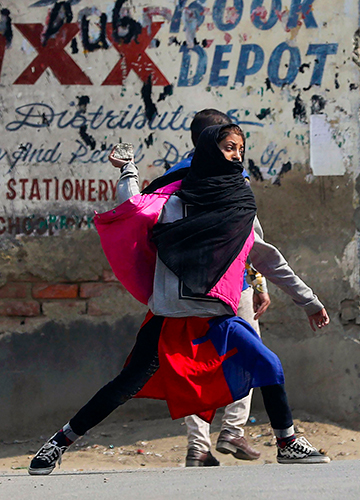 Last stand: An anti-government protester in Srinagar. Abrogation of Article 370 was a key element of the BJP’s ideological agenda | PTI

The RSS and the BJP have set up effective coordination mechanisms whereby cabinet ministers and senior party leaders discuss with representatives of various sangh organisations policies that need to be pushed, and share feedback from the ground. The ‘One Rank, One Pension’ scheme for the armed forces was announced by defence minister Manohar Parrikar during the first such meeting in Delhi in September 2015.

The sangh’s influence is clearly visible in the policy domain. Restrictions imposed on e-commerce giants like Flipkart and Amazon, opposition to genetically-modified crops, demand for price regulation of medical devices and for data localisation have all been supported by the sangh. Pro-RSS outfits like the Swadeshi Jagaran Manch and the Bharatiya Mazdoor Sangh had a key role in India’s recent decision to keep out of the Regional Comprehensive Economic Partnership (RCEP). These groups are also opposed to disinvestment in public sector companies like Air India.

The right turn is evident in the cultural and educational spheres as well, with the Modi government appointing people close to the sangh to head prominent institutions like the Indira Gandhi National Centre for the Arts, the Nehru Memorial Museum and Library and many other important universities, technical institutions, cultural organisations and museums. The NMML board and the Jallianwala Bagh Memorial Trust have been purged of Congress leaders. The next step is to re-imagine museums in the country and build new ones to celebrate Hindu icons like Chandragupta Maurya, Chanakya, Maharana Pratap, Subhas Chandra Bose, Patel and Ambedkar.

The new education policy has been conceptualised with inputs from sangh affiliates like the Bharat Shikshan Mandal run by senior RSS leader Mukul Kanitkar. The BSM has suggested increased focus on learning in mother tongue, renaming the human resources development ministry as ministry of education and introducing changes in pedagogy and the management of institutions. 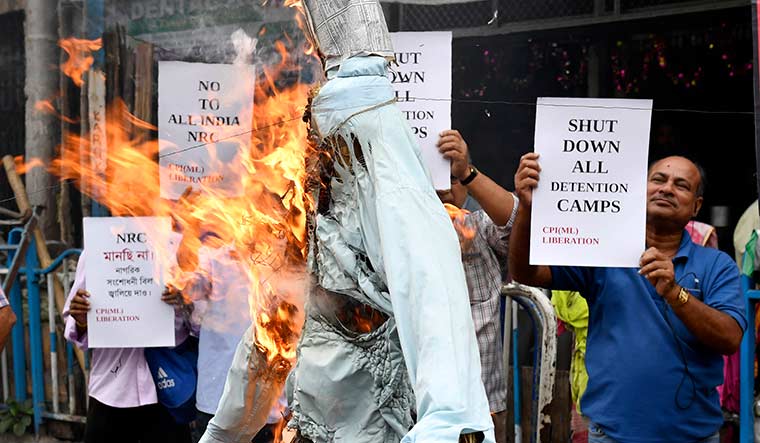 Burning anger: Protest in Kolkata against the NRC. The BJP has promised to implement NRC across the country | Salil Bera

Kanitkar’s organisation is working with the Union government to promote Indic thought in research and education. It has organised several national conclaves for the purpose. Modi inaugurated the first such conference held last year in Delhi. The conference was attended by vice chancellors representing nearly 400 institutions and directors of 24 IITs and 14 IIMs. Kanitkar also runs the Research for Resurgence Foundation, which aims to change the way PhD programmes are conducted in India.The organisation has signed MoUs with over 60 universities and it promotes PhDs on topics discussed in ancient Indian texts. Nearly 400 students have already enrolled in the programme, with a research centre being set up in Nagpur. The group is also exploring the possibility of an indigenous internet system to counter foreign internet giants who store data abroad.

The sangh believes that the existing curriculum in India was framed with a colonial mindset, primarily by Marxist thinkers who held sway over India’s education infrastructure. Instead of teaching 4,000 years of Indian history, it focuses only on the last 400 years, says sangh ideologues. The recent discoveries from the excavation sites of Rakhigarhi and Sanauli have excited the saffron camp as it “proves” their argument regarding the existence of the Vedic civilisation. 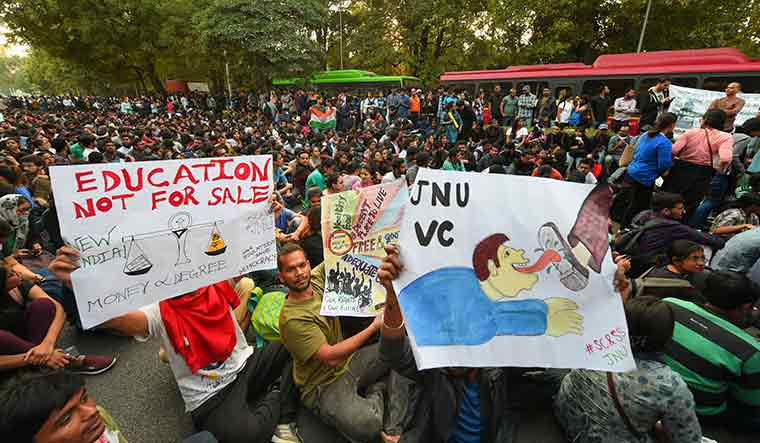 Final bastion: JNU students on strike against fee hike. The university continues to be a citadel of anti-right forces | PTI

The rightwing ecosystem runs a network of thinks tanks like the Prajna Pravah headed by J. Nandakumar and the India Foundation headed by Ram Madhav and Shourya Doval, which engage with the English-speaking intelligentsia. They train youngsters in nationalist thought and prepare them to challenge leftist intellectuals. The India Foundation works closely with the ministry of external affairs and holds international conferences and arranges for fellowships for suitable candidates.

On the cultural front, there has been a spurt in films, television shows and books that feature topics of Hindu resurgence. Bahubali, a film which broke records in budget and revenue, unabashedly celebrated Hindu might. The growing number of mythological novels and non-fiction books interpreting Hindu symbols also point towards this trend.

Of late, the RSS has been working to recast itself as a modern organisation by revisiting its position on a number of controversial issues such as homosexuality. Bhagwat said the sangh was not bound by any ideology or any text including M.S. Golwalkar’s Bunch of Thoughts, which, for years, have guided the faithful. The only non-negotiable belief are the concepts of Hindu and hindurashtra, said Bhagwat.

Senior pracharak Sunil Ambekar’s book, The RSS: Roadmaps for the 21st Century, offers an overview about the changes in the sangh. It says some of the earlier texts like the Manusmriti have become redundant and that the only relevant smriti was the Constitution. It says hindurashtra is not anti-Muslim, but is a contemporary, non-violent nation where peace and prosperity prevail, and it promotes freedom of worship and equality of women.

This emphasis on nationalism, however, makes a clear departure from the Nehruvian model of governance. The sangh wants to replace the existing polity based on secular, socialist values, with its concept of “new India”, which will be based on the aspirations of the majority community. The NRC, CAB, the abrogation of Article 370, the ban on triple talaq and the Ayodhya judgment are all rooted in majoritarian aspirations.

Another feature of this shift is reflected in the physical space. Modi is giving India his own monuments. The proposal for a new Ambedkar Bhavan and a new Pragati Maidan are changing imperial Delhi. The redevelopment of the Lutyens Delhi, especially the central vista comprising the Rashtrapati Bhavan, the Central Secretariat and the India Gate, is aimed at giving a new city to Delhi, and to leave a permanent mark of Modi’s legacy. A grand Ram temple in Ayodhya will cement his position as the Hindu hriday samrat.

The disruption in the direction of the polity, however, comes at a price. There is already pressure on the government from its hardcore supporters to take action against those who do not comply with the majority ideology, be it political opponents or those who hold a different view. The use of the sedition law and the national security act to silence critics have been widely criticised. The government has been especially harsh against those who believe in aggressive left ideology. In fact, a major turn towards nationalism as a political slogan happened after the February 9, 2016 ruckus at Delhi’s Jawaharlal Nehru University where “anti-national” slogans were allegedly raised. Nationalism subsequently became the war cry, as it became synonymous with Hindu nationalism. The JNU still remains a citadel which has not been conquered yet.

For now, the sangh parivar is not worried. It views the allegations of the fear psychosis prevailing in the country as a rant of entitled liberals who have been dislodged from their perches. And, the opposition has been unable to seize the agenda and offer a compelling counter-narrative.