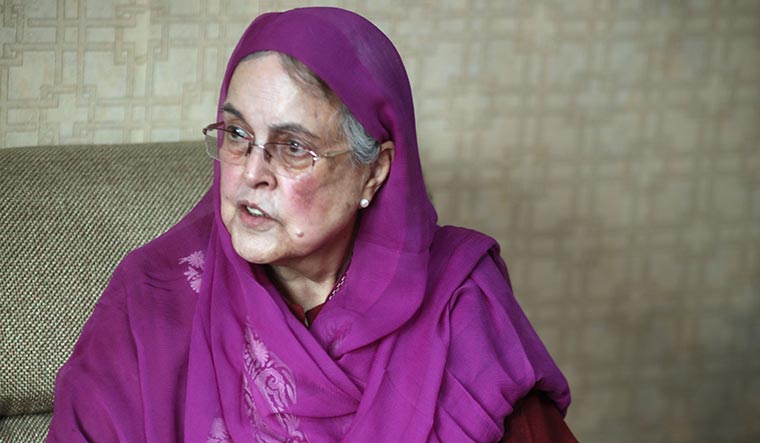 Khalida Shah was 12 when her father Sheikh Mohammad Abdullah, the patriarch of the National Conference, supported Maharaja Hari Singh’s decision to accede to India in 1947. She has vivid memories of the events that unfolded in the state, including the killing of 2.5 lakh people in the riots in Jammu after Singh fled from Kashmir to Jammu days before the tribal invasion. Khalida’s relations with brother Farooq Abdullah got strained after her husband, Ghulam Muhammad Shah, deposed Farooq in 1983 to become chief minister of J&K with the support of the Congress. Like many mainstream political leaders in Kashmir, Khalida and her son, Muzaffar Shah, continue to be detained in their homes after the revocation of Article 370. The eldest of the Sheikh’s five children spoke to THE WEEK at her residence, on Article 370 and the way forward for Kashmir.

Did you ever imagine a situation where Article 370 would be revoked and J&K be turned into a Union Territory?

I knew they can do a lot of things, but I had never thought that they would go to such an extent. If a different dispensation was in power at the Centre, they would have been mindful of the consequences of scrapping Article 370.

Why do you think the BJP did it?

What do you think would be the implications?

If they (BJP) do not come to their senses, they will destroy Kashmir. But Kashmiris will not go down alone; they will take them along.... For now, Kashmiris are keeping quiet. A day will come when they will erupt and no one will be able to control the situation.

Such fears existed before Article 370 was revoked, but nothing has happened.

That is because everyone realised that a reaction like stone pelting, as in the past, will not help.

What, according to you, is the way forward?

For now, we are trying to fight it out legally and spread awareness. We are also trying to make the government understand that this is detrimental to you, too. If they do not understand, then people will fight it out without caring for consequences.

You are critical of the BJP, but the move on Article 370 was supported by both houses of Parliament.

Unlike Kashmiris, who are conscious of the history and politics of their place, parliamentarians lack awareness about J&K. We have lost thousands of people in the last several years. One day we will achieve everything, inshallah.

Some leaders feel that the Centre should grant Article 371 to J&K, like in the northeast, to dispel fears of demographic change and loss of jobs to outsiders.

People talking of Article 371 for J&K should be considered traitors. We need Article 370 back and in its original form and shape.

Since the move on Article 370, many Kashmiris are saying that Sheikh Abdullah erred in 1947 by siding with India.

Hari Singh was the king. They (Dogra rulers) had purchased Kashmir from the British along with its people. When he agreed to sign and give away everything, the security of the people at the time was of utmost importance and that is [why it] was done.

So your father supported Hari Singh’s decision for the safety of the people of J&K?

He did it for people’s safety, honour, land and everything else. It was no mistake. Whatever happened then, we had moved on with India. But now, when we are being spurned, are we mad to continue our relationship with them? I say leave us to our fate now. Whatever becomes of us, we will deal with it.

What is the relationship between J&K and New Delhi now?

Nothing. They are controlling Kashmir through the gun. They have deployed nine lakh troops. Anybody who comes to Kashmir, flies to Raj Bhavan in a helicopter. They cannot traverse a small distance on their own. So how can they control anyone?

How do you see Pakistan Prime Minister Imran Khan’s attempts to internationalise the issue?

What he did for Kashmir is highly appreciable. I thank him for what he did. He supported and pleaded the case of Kashmir. At least there is someone who spoke for us.

What do you have to say to the BJP’s claim that Article 370 was a hindrance in the development of Kashmir?

Free education and land to till, which many people still cannot dream of even today, were first implemented in Kashmir 70 years ago. Roads, schools and other infrastructure are available here. This was done to turn us into slaves, like in the time of the Pharaoh. But Kashmiris will not accept that.

Did you speak with Farooq Abdullah after he was detained?

I have not been able to meet him because we are not allowed to move out of our house.

What would you say to the Centre’s efforts to rope in leaders to fill the political vacuum in J&K?

Such efforts have always been there. I pray that Allah strengthens our faith. That is the biggest thing that helps a person to weather difficulties.

What do you think the future holds for Kashmir, having seen it all since childhood?

I was a keen listener and observer from childhood. When [Mahatma] Gandhiji came here, my mother took me to his prayer meetings. I reflected on every word he said and I can say that there cannot be another person like him. But Gandhi’s India has ceased to exist.

If Sheikh Abdullah were alive today, how would he have reacted?

When he was taken ill, he was totally disgusted with India. He had even said that after he recovers, he would call a party meeting and take a final decision about what to do. If he were alive today, nobody would have dared to touch Article 370.