Sonia Gandhi to hold the party together, Rahul could emerge a parallel power centre 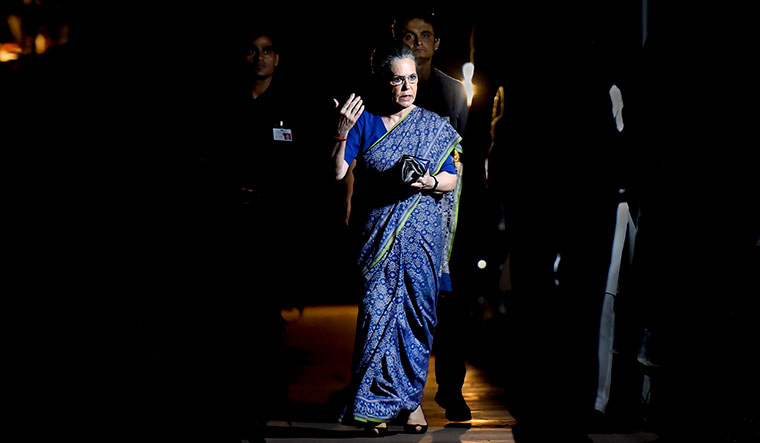 Back at the helm: Interim Congress president Sonia Gandhi | PTI

At the Congress Working Committee meeting on August 10, when senior leader P. Chidambaram proposed that Sonia Gandhi should take over the reins of the party, there was a sense of deja vu. The party was undoing the generational change that had taken place around 18 months earlier, when Sonia had passed the baton to Rahul.

Though several leaders seconded Chidambaram’s proposal, Sonia initially said no. The situation was similar to 1998, when Congress leaders had requested a reluctant Sonia to become party president. And just as in 1998, leaders said the party, beset with desertions, could even split if she did not take charge. Finally, Sonia agreed.

The names of probables such as Mukul Wasnik or Mallikarjun Kharge, which had been doing the rounds, were not even taken up for discussion. This was despite Rahul Gandhi having declared, while stepping down, that his successor had to be a non-Gandhi.

It was also awkward for Sonia, who had to replace her son. But she had to do it because the divisions between the old guard and the new generation had reached breaking point.

Since the day Rahul stepped down, on May 25, there had been a battle of wits between him and the seniors. “Accountability is critical for the future growth of our party,” Rahul wrote in his farewell letter, clearly indicating the purpose of his resignation. “It is for this reason that I have resigned as Congress president. Rebuilding the party requires hard decisions and numerous people will have to be made accountable for the failure of 2019.”

Said a leader in the Rahul camp: “I believe that we ceased to be office-bearers or Congress Working Committee members after my Congress president resigned. After all, he had appointed us.”

Rahul’s resignation, however, did not have the desired effect. The seniors instead got busy with finding his successor. Those close to Rahul called the process undemocratic and propped up names such as Jyotiraditya Scindia and Sachin Pilot to counter suggestions of Kharge and Wasnik.

Rahul had said that he did not want to be part of the consultations to choose the next president, but the manner in which he was shut out of the process was seen as the old guard exerting its influence. 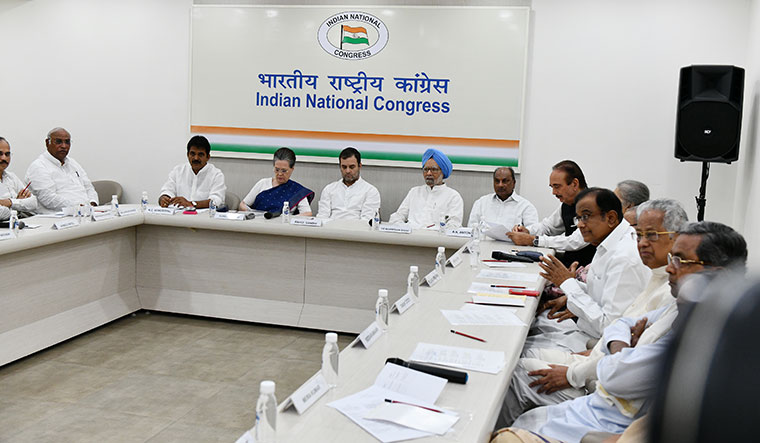 A lot to discuss: Congress leaders during the CWC meeting on August 10 | Sanjay Ahlawat

And then, Rahul made his next move. On the eve of the August 10 CWC meeting, he made the surprise declaration that he wanted the consultations to include state unit chiefs, Congress Legislature Party leaders, chief ministers, chairpersons of All India Congress Committee departments, MPs and also AICC secretaries.

Accordingly, the CWC split into five sub-committees for region-wise discussions. On expected lines, partly because Rahul had appointed most of these leaders or because their views were being put on record, all of them said he was best suited to lead the party. Some said that if not him, Priyanka Gandhi Vadra should assume the mantle.

The message was clear—a large section of the party stood with Rahul. And this was intended as a response to the seniors. The CWC also passed a resolution that praised Rahul for his “exceptional leadership”.

The other message was that only a Gandhi could keep the party together in the current situation. If a non-Gandhi was made president, said many leaders, there would be large-scale desertions and the party could even split. “We told the CWC that the party was on the brink. The party would disintegrate if any Tom, Dick or Harry was made president,” said a leader from Punjab.

This practically ruled out discussion on other names; Sonia became interim president. “The CWC and its members felt that as the country is going through a difficult situation, the country and the Congress need accountability to be fixed both inside and outside Parliament,” said Randeep Surjewala, head of the party’s communication department. “Until a regular president is elected, the most experienced and tested leadership is that of Sonia Gandhiji.”

The seniors in the party have reasons to rejoice. They have always been more comfortable working with the consensus-seeker Sonia rather than Rahul, who apparently distrusts the old guard.

Sonia has made it clear that she will be party president only till the end of the coming round of assembly elections, after which a regular president will have to be elected. However, her term can easily be extended up to a year at least. And it is hoped that, during this time, she will be able to smooth ruffled feathers in the party with her pacifist approach, stem the outflow of leaders and tackle factionalism in the state units.

In recent days, three Rajya Sabha MPs quit the Congress for the BJP. The party also saw a mass exodus in Goa and Telangana. It is hoped that Sonia will be able to instil some confidence in the leaders and help contain migration.

As for the assembly elections, Sonia will have to hit the ground running. But the intense infighting in the poll-bound states of Maharashtra, Haryana and Jharkhand would make this difficult. In Maharashtra, for instance, leader of opposition Radhakrishna Vikhe Patil recently jumped to the BJP. In Haryana, the tussle between state party president Ashok Tanwar and former chief minister Bhupinder Singh Hooda threatens to tear the party apart. And, in Jharkhand, state president Ajoy Kumar quit the party on August 9, describing state Congress leaders as being worse than hardened criminals.

“Soniaji is highly respected by everyone,” said Hooda. “She can take everyone along. Her leadership will further strengthen the party.”

Another challenge for Sonia would be to re-unite the fragmented opposition. She is said to enjoy a good rapport with regional satraps and has, in the past, successfully reached across the aisle in Parliament to craft a coordinated voice against the Modi government.

Some Congress leaders, however, point out that the Sonia of 2019 is very different from the Sonia of 2004. She is now 72 and has cut down on political outings because of her health. There are also doubts if Sonia, in her current state, would be able to boost the morale of party workers.

And there is speculation regarding Rahul’s role. In his farewell letter, he had said, “I will, of course, continue to fight for the ideals of the Congress party with all my strength. I am available to the party whenever they require my services, inputs or advice.”

Although he does not hold any post in the party at the moment, Rahul is not fading into the background. Rather, there is a possibility of Rahul emerging as a parallel power centre. This would be like the situation before he became party president, when leaders complained of dual power centres in the party.

Leaders close to him say that as a Lok Sabha MP representing Wayanad, he would continue to be a strong voice of opposition in Parliament. The also say that he would be the party’s lead campaigner in the upcoming assembly elections. And, with Sonia being interim president, there is a possibility of Rahul making a comeback when elections to the top post are held.

There is also the possibility that Sonia is keeping the chair warm for Priyanka. Congress leaders do not rule this out. Some even say that Priyanka has emerged as an important decision-maker in the party and even as a third power centre. However, leaders close to Priyanka, who is party general secretary in charge of eastern Uttar Pradesh, insist that she wants to focus only on reviving the party in the state and is preparing for the 2022 state elections.

For now, the old guard is expected to try and strengthen its hold on the party under Sonia. As always, with the Congress, it seems as though the more the things change, the more they remain the same.