What's worrying BJP in Goa, in spite of comfortable majority

BJP now has a comfortable majority in Goa assembly, but all is not well in the party 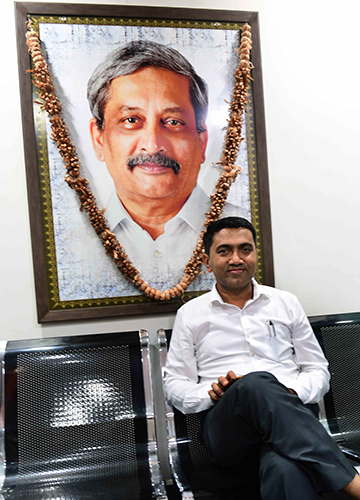 HAS GOA CHIEF Minister Pramod Sawant bitten off more than he can chew? The defection of 10 Congress legislators to the BJP might have given the saffron party a comfortable majority in the assembly, but it has also shocked the core BJP supporters as well as the people of the state. And it is bound to create pressure groups within the BJP, which Sawant may find difficult to deal with in the days ahead.

The defection has brought down the Congress tally in the 40-member assembly to five and the BJP’s has gone up to 27. Soon after securing the majority, Sawant dropped four ministers from his cabinet—Vijai Sardesai, Vinoda Paliencar and Jayesh Salgaonkar of the Goa Forward Party, and the independent member Rohan Khaunte. He inducted Chandrakant Kavlekar (who was the leader of the opposition), Michael Lobo, Filipe Nery Rodrigues and Jennifer Monserrate to the cabinet; Kavlekar was made deputy chief minister.

Ironically, it was on May 23, when Atanasio ‘Babush’ Monserrate won the byelection in the Panjim constituency on a Congress ticket that the plot was hatched. Babush is learnt to have discussed with BJP legislator Lobo the possibility of bringing over five Congress legislators. Lobo discussed the idea with Satish Dhond, organisation general secretary of the BJP in Goa. “It was our mistake to nominate Babush from Panjim,” said Goa Congress president Girish Chodankar. “He has changed parties several times. The BJP exploited this group’s greed and lust for power and money.”

A month before the Lok Sabha elections, Kavlekar had tried to convince Sardesai, then deputy chief minister, to walk out of the BJP alliance so that the Congress could form the government. “He told me that if I was not interested then he would quit the Congress and join the BJP with his group of legislators and then the BJP would not need our support,” said Sardesai. “I told Kavlekar that I was not interested in breaking away from the BJP as I had given my word to [former chief minister] Manohar Parrikar and the BJP’s central leadership.”

Lobo put the blame on Sardesai’s aggressive tactics and alleged that he was plotting to bring down the government. “Sardesai was arrogant. He used to insult our chief minister and blackmailed us constantly with the threat that he will withdraw the support,” he said.

Sardesai, however, rejected the allegations. “In June 2017, Babush had approached me and asked me to withdraw support to the Parrikar government. I turned it down,” he said. “I had given my word to Parrikar, Nitin Gadkari and Amit Shah while forming the government in 2017 and again before Parrikar’s demise in March this year. This is the reward we get for our loyalty. What the BJP has done in Goa is a daylight murder of democracy.” 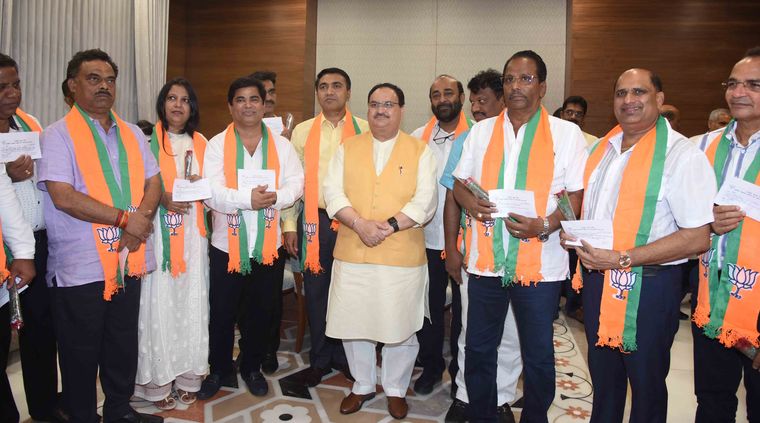 Pull of power: Ten Congress MLAs joining the BJP in the presence of party working president J.P. Nadda in Delhi.

Many BJP leaders in Goa are also not happy about it. Party veterans Rajendra Arlekar and Lakshmikant Partaker have expressed displeasure. They are worried that tainted legislators like Babush, who faces a rape case, and Kavlekar, who is alleged to have connections with the matka gambling lobby, would damage the image of the party. Parrikar’s son Utpal and close associate Giriraj Pai Vernekar have also raised their concerns.

Of the BJP’s 27 legislators, 12 are former Congressmen and 15 are Catholics. “For the first time there are more minority legislators in the BJP than the majority,” said Power Minister Nilesh Cabral. “This is a good sign; we can truly transform Prime Minister Modi’s vision of ‘Sabka Saath, Sabka Vikas Aur Sabka Vishwas’ into reality now. Party workers may feel upset for some time, but in the long run it is good for the BJP.”

But many BJP leaders are worried about the influence the 15 Catholic legislators will have on the government. “Lobo is very ambitious,” said a senior BJP leader. “He has openly said that he wants to be the chief minister. Don’t be surprised if Lobo leads this group of 15 Catholic legislators and stages a coup. Sawant will have to watch each and every move of Lobo and this group.”

Pranav Sanvordekar, an office bearer of the BJP, has quit over the recent developments. “If they wanted Babush so desperately, they could have given him the party ticket in the byelections when he had approached us,” he said. “He cannot be trusted at all. He is known for changing parties whenever it suits him. Because of the charges that he is facing, our campaign against him was that women in Goa will not be safe if he gets elected. And now they have welcomed the same man into the party.”

The biggest loser in the whole episode is the Congress. From 17 legislators in 2017, it is now down to five. Of these five, four are former chief ministers. The fifth one, Aleixo Reginaldo Lourenco, is in his third term; he is hopeful that he would be made the leader of the opposition because the other four are old. Lourenco said he was also made an offer to switch sides. “I turned it down as I want to remain in the Congress,” he said. “Anti-defection law applies in this case as I feel that our national party has not split, only the legislative wing has split in Goa. Even the Goa Congress is intact.” What remains to be seen is whether it will gather its wits to challenge the defection in court.