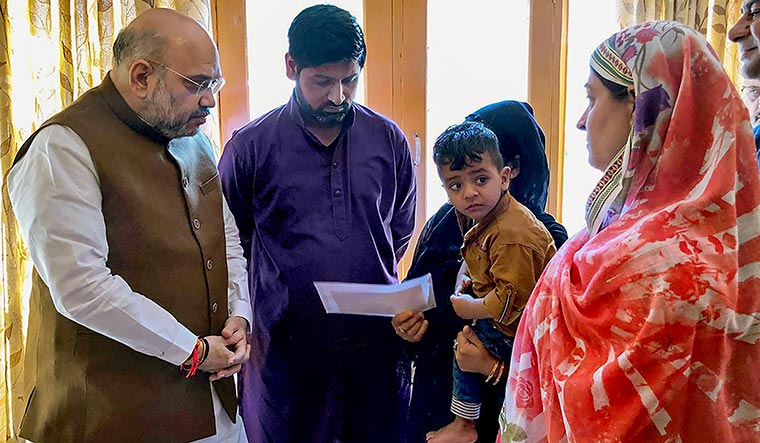 HOME MINISTER Amit Shah’s visit to Jammu and Kashmir on June 27—his first to a state after swearing in—was unique in many ways. He became the first Union minister to visit the family of a slain Kashmiri police officer, did not meet leaders of the regional parties, and restricted his trip to the Kashmir region only.

Moreover, for the first time, the separatists did not call for a strike, like they had in the past when Central leaders visited the state.

Top officers of the police, the Central Reserve Police Force and the Army briefed Shah about the security situation, operations against militants, the situation at the Line of Control, and security arrangements made for the 45-day annual Amarnath yatra.

According to sources, the yatra, which started on July 1, figured prominently in the meeting. In addition to police and other forces, 30,000 CRPF men have been deployed for the pilgrimage. Moreover, arrangements have been made for satellite- and chip-based tracking of pilgrims’ vehicles to keep them on the radar of security agencies. At the registration counters, pilgrims would be given microchip-embedded wristbands that are connected to satellite towers installed at various locations. About 200 CCTV cameras have also been installed at the base camps and at vulnerable points, including some spots on highways.

After the security briefing, Shah met the core group of state BJP leaders, and panchs and sarpanchs affiliated with the party. Anil Sharma, president of the All Jammu and Kashmir Panchayat Conference, told THE WEEK that they had a detailed discussion with Shah and put forward certain demands. “We demanded a separate election and financial commission for the panchayats,” he said. “We urged the home minister to ensure elections in block development commissions and empowerment of the panchayats.”

They also urged Shah to provide a minimum of Rs25 lakh for developmental works in the panchayats in their constituencies. “We demanded that the four seats that are reserved for panchayat members in legislative councils be filled as those who were nominated last time have completed their terms,” added Sharma. He said he also told Shah that all this would hugely benefit the party in the assembly elections.

The BJP’s state in-charge Avinash Rai Khanna, who was camping in Kashmir, said the party was looking at a 20 per cent increase in its membership in the state, especially in Kashmir. Khanna said Shah met state leaders and workers and urged them to strengthen the party. He said the elections did not figure in the discussion, but the party was ready to contest whenever the Election Commission announced the polls. “We have the support of hundreds of panchs and sarpanchs, and municipalities in Jammu and Srinagar are already under our control,” said Khanna. “We are aiming to get 44 plus [of 87] seats in the assembly.” 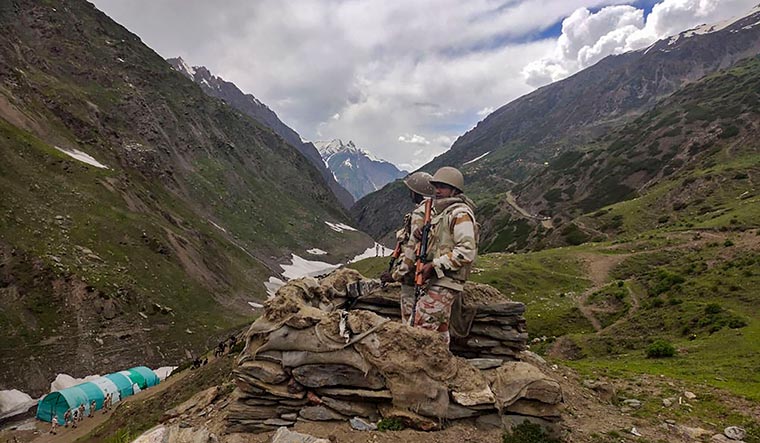 On the second day of his trip, Shah visited the home of inspector Arshad Khan at Balgarden in Srinagar. Many saw the visit as a recognition of the role the Jammu and Kashmir Police plays in the fight against militancy in the state. The police’s role often gets overshadowed because of the attention that the media and the Centre give to the Army and Central forces. Since 1989, about 1,600 men of the state police have been killed in attacks by militants and in anti-militancy operations in the state.

Shah met Khan’s parents and handed over an appointment letter to his widow; she was given a job in the state health department. Khan was injured on June 12 when he rushed to the aid of a CRPF party that was under attack from a Pakistani militant at K.P. Road in Anantnag. Five CRPF men and the militant died in the attack. A bullet had pierced Khan’s liver and intestines and he was taken to hospital. He was later airlifted to Delhi for treatment at the All India Institute of Medical Sciences, where he died on June 17.

There were emotional scenes at District Police Lines in Srinagar, where Khan’s body was kept for wreath laying. The video of Haseeb Mughal, the senior superintendent of police, Srinagar, bursting into tears while carrying away Khan’s four-year-old son, Ubhan, went viral on social media. “We are pleased that the spouse of our slain colleague got a government job,” Mughal told THE WEEK. “Usually, such cases take a minimum of six months, but this one was settled in a week.” He said since most policemen were locals, the media had not focused on the police’s sacrifices. “We hope it changes now,” he added.

Though he met many people on his visit, Shah notably did not meet any regional leaders, which was seen as a snub to them by the BJP government. The party has been highly critical of the National Conference and the People’s Democratic Party,04 and has accused them of perpetuating dynasty politics and misrule. Shah recently moved a bill in the Rajya Sabha to extend President’s rule in the state by another six months. It was passed on July 1. Apparently, the BJP wants the Election Commission to hold elections in the state after Amarnath yatra. The party believes it can use its success in the Lok Sabha elections to its advantage in the state polls.

* The BJP wants to increase its support base in Kashmir using its political and organisational strength.

* But, given that it wants to abolish articles 370 and 35A, the BJP would find it difficult to do so in the near future.

* In 2002, the state government barred delimitation till the first census—after 2026—was conducted.

* The BJP could get the governor to amend the Representation of the People Act to allow for delimitation.

* This, however, needs approval from Parliament.

* The BJP hopes the delimitation would increase the number of assembly seats in Hindu-dominated regions; Kashmir has 46 to Jammu’s 37. Ladakh has four.

* The BJP is unlikely to hold talks with Hurriyat Conference outside the ambit of the Constitution.

* The government has come down hard on separatists and has arrested many for terror funding.