How political slugfest over Mission Shakti overshadowed its success

Mission Shakti is a major success, but giving it a political spin was not prudent 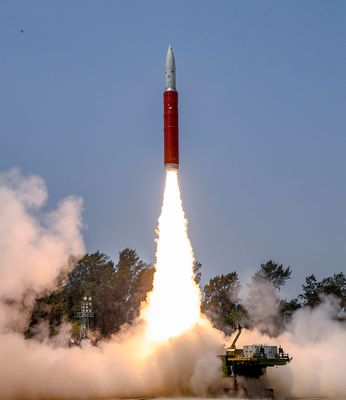 Sky is no limit: The anti-satellite missile that was launched as part of Mission Shakti | PTI

ON THE NIGHT of January 24, the Indian Space Research Organisation launched a set of micro-satellites from the Satish Dhawan Space Centre at Sriharikota in Andhra Pradesh. For the next two months, top missile men at the Defence Research and Development Organisation’s Advanced Systems Laboratory (ASL) in Hyderabad burnt midnight oil readying themselves for another launch. Finally, at 11:10am on March 27, they launched a missile from the A.P.J. Abdul Kalam complex, destroying an ISRO micro-satellite three minutes later.

Barely an hour later, the implications of this ‘routine launch’ became clear, as Prime Minister Narendra Modi addressed the nation. “This is a big moment for India, something all of us should be proud of,” said Modi. “We are capable of defence not just on land, water and air, but now also in space. I congratulate all scientists who have made this possible and made India a much stronger nation.”

Modi said the scientists had shot down a low earth orbit satellite (a satellite at an altitude of 2,000km or less) using an ASAT (anti-satellite) missile. The operation, named Mission Shakti, made India the fourth nation—after the US, Russia and China—to achieve the feat. The destroyed satellite had an altitude of 300 kilometres.

A political slugfest, however, soon overshadowed the big achievement. The opposition questioned the timing of Modi’s announcement, as campaigning for the Lok Sabha elections was in full swing and the Election Commission’s model code of conduct was in effect. Many scientists, too, mused on the advisability of conducting the test and publicising it now.

DRDO chief Satheesh Reddy told THE WEEK that the mission was purely a deterrence measure. “We have done a technology and capability demonstration,” he said. “With this, we have completely developed indigenous technologies for the anti-satellite mission. We have achieved greater accuracies, of a few centimetres, and we have the capability to do it at higher altitudes also.”

China has conducted three such tests since 2007, facing a lot of criticism globally. The latest test was in February last year. “China did the test at 875km in space, and the debris from that mission are there even today,” said an observer.

“As a responsible nation, we have done it at a lower altitude,” said Reddy. The next stage of the mission? “We need to plan it now,” he said.

Defence experts say India has now attained the ability to render an enemy country ‘deaf and blind’—by targeting its communication, military and surveillance satellites. But, was it prudent to publicise the operation? “This is a deterrence against those who are capable of destroying our satellites,” said a scientist. “We are only telling them that we, too, have the same capability. We have about 50 orbiting satellites, probably the largest [fleet] in the Indo-Pacific region. They need to be protected.”

Soon after Modi’s big announcement, the ministry of external affairs came out with a detailed note that explained why the test was not directed against any country. “At the same time, the government is committed to ensuring the country’s national security interests and is alert to threats from emerging technologies,” it said. “The capability achieved through the ASAT missile test provides credible deterrence against threats to our growing space-based assets.”

Critics say the technology had already been proved in more complex tests earlier. “Actually, it is the same technology that the DRDO had proven in several anti-missile tests, which were more complex,” said a scientist. “We have done several exo- and endo-atmosphere tests against incoming missiles, which are more difficult to track and kill, compared to a satellite whose orbit is known and predictable. And, on those occasions, there was no tom-tomming. The announcements were always made by the DRDO itself. We never gave a political spin to those tests.”

The opposition is rankled by the efforts to give it a political spin. Samajwadi Party leader Akhilesh Yadav accused Modi of diverting attention from issues on the ground “by pointing to the sky”. Congress president Rahul Gandhi tweeted: “Well done, DRDO; extremely proud of your work. I would also like to wish the PM a very happy World Theatre Day.”

The issue of the previous Congress-led government keeping on hold the DRDO’s proposal in 2012 to test the anti-satellite weapon technology has also cropped up in the political slugfest. A cautious government did not give the green-light then, thinking that the test could be billed as “space offence” rather than “space defence”. “It is space defence when you show capability of destroying an incoming missile,” said a scientist. “But it is space offence when you show capability to destroy someone else’s satellite.”

Between national security and public opinion, the choice was clear, said D.P. Srivastava, senior fellow at the Vivekananda International Foundation. “We needed deterrence against Chinese capabilities,” he said. “Low earth orbit satellites are used for intelligence gathering. The ASAT demonstration enhances perception of capabilities; it will have deterrence effect. In fact, like Smiling Buddha (codename for India’s 1974 nuclear test), it was overdue. We could have conducted the nuclear test a decade earlier; we should have done it before the Non-Proliferation Treaty came into place. The treaty considered countries that had tested nuclear capability before 1967 (the US, the UK, France, China and the USSR) as nuclear weapon states—a tag India could have got, too.”

Harsh Pant of the Observer Research Foundation said the ASAT test would not come as a surprise to the international community, as India had for long been giving hints of such a demonstration. “It will, however, push the larger debate on how to ensure that space remains non-weaponised,” he said. “In that sense, it was good India entered this club, because it can now steer international discussions on non-militarisation of space.”