How Lutyens Delhi is changing in Narendra Modi's new India

New Parliament to be ready for budget session; current building will host offices 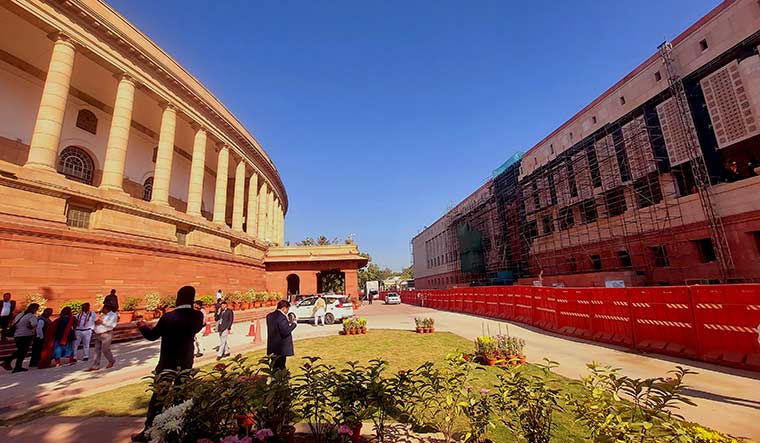 A stone’s throw: The new Parliament building under construction near the current one | J. Suresh

Often, as the old makes way for the new, the past re-emerges in the most intriguing ways. Sir Edwin Lutyens, the architect of New Delhi, had in 1928, just a year after the Parliament house was inaugurated, proposed constructing a mirror image of the building. The second building that would have been constructed across the Central Vista Avenue would have housed the Parliament secretariat. The proposal did not take off.

Almost a century later, Lutyens’s proposal was dusted off and became the basis for a discussion on the need to construct a new Parliament building. The current one, it was increasingly felt, was over-utilised and showed signs of wear and tear. The new building―the centrepiece of the ambitious Central Vista Redevelopment Project―is not circular though. And here, Lutyens’s co-architect in the design of New Delhi, Sir Herbert Baker, could claim vindication. His original design for the Parliament house, a triangular structure, finds resonance, even if inadvertently. Lutyens had prevailed upon him to alter his plan and thus was born the colosseum-shaped edifice.

A new, triangular Parliament house has taken shape. Though not at the location Lutyens had chosen for his proposed lookalike, the site is just a stone’s throw away from the iconic building. The original plan was to get the building ready before the winter session of Parliament. According to officials in the Lok Sabha Secretariat, the building is almost ready and the budget session is expected to be held in the new Parliament. Plot No 118, located at the heart of the country’s preeminent real estate, is, at present, the hub of hectic construction activity. The plot of land will soon bear the most important address in the country―Sansad Bhavan.

Designed by renowned architect Bimal Patel, the new Parliament building promises to be an imposing structure, grand in scale and vision, and modern in construction and functionality. And even as it seeks to break from the old and represent, in Prime Minister Narendra Modi’s words, the aspirations of a new India, the links to the past remain. 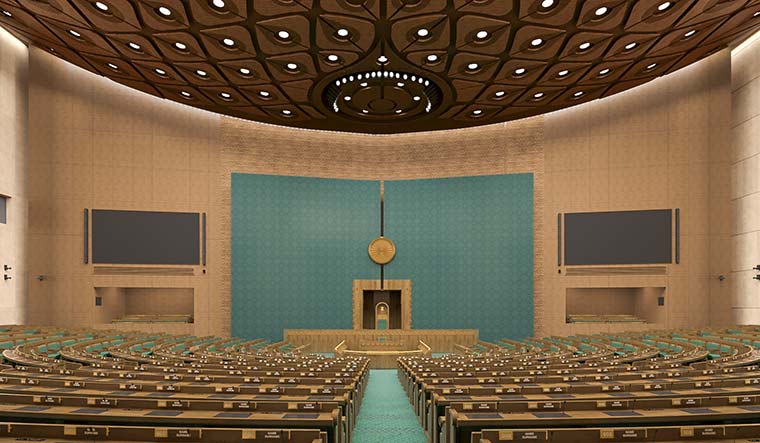 According to HCP Design, Planning and Management, Patel’s Ahmedabad-based architecture firm, the shape is inspired by the triangular plot. The idea is to make the best use of the available space. Also, as per details on the new Parliament building shared by the firm in December 2020, when the foundation stone was laid, the triangular plan lends itself well to the three primary functional requirements―the Lok Sabha, the Rajya Sabha and a courtyard, allowing the floor space to be organised in an efficient manner.

Moreover, said HCP Design, “The two forms (the old Parliament building and the new) work well together, aesthetically, for a complex that will ultimately function as the legislative enclave along with the library and annexe.”

Elaborating on the shape, the firm further said: “The current Parliament building is much loved by the people of the country and is built in a pure geometric form―a circle. The proposed facility is designed to pay homage to this iconic structure without mimicking it, therefore the choice of a different but equally strong pure geometric form―a triangle―was found apt.” 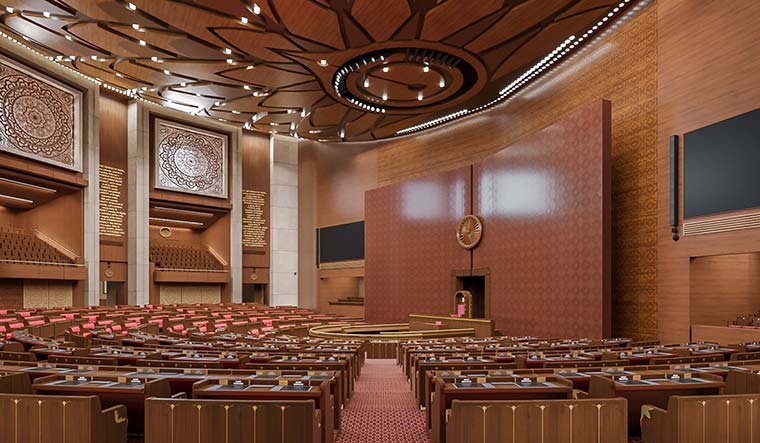 The new building, with a total built up area of 58,700sqm, has much bigger debating chambers compared with the current Parliament. The Lok Sabha chamber in the new building is three times bigger than the present one, with a seating capacity of 888 members, which can be increased to 1,224 in joint sessions. The Rajya Sabha has space for 384 members―four times bigger than the current chamber.

The new Parliament building matches the height and bulk of the present Parliament building. According to HCP Design, the architecture and aesthetics of the new building takes reference from the current building, other buildings of the Central Vista, and the classical, folk and tribal arts and crafts of India.

The dome of the new Parliament is ready, and a grand replica of the national emblem, cast in metal, was installed on top of it. Although, its unveiling in July did give rise to a debate on whether the lions looked aggressive and menacing in deviation from the original.

A central Constitution hall and gallery will showcase the Indian Constitution, and the cultural diversity and heritage of the country will be depicted through art installations.

Sandstone from Sarmathura in Dholpur district of Rajasthan has been used extensively in the building to help give it an appearance that is in keeping with the original buildings of the Central Vista.

There is extensive use of wooden structures, with wood procured from Nagpur, Maharashtra. Artisans and craftsmen from Mumbai were brought on board for the woodwork, which will bear traditional motifs and elements. Carpets have been procured from Bhadohi, Uttar Pradesh, which is famous for its hand-knotted carpets.

Desks in the debating chambers have been designed by HCP, with the firm’s architects testing prototypes to check for convenience and functionality. The designs of the desk and the bench were revised based on feedback from multiple users and stakeholders to create an improved prototype which was again tested.

Three-dimensional models were used as design tools to determine the ideal levels for seating in the Lok Sabha and Rajya Sabha halls. The arrangements for circulating printed documents and the visibility of the speaker was an issue in the current Lok Sabha hall. This was addressed by sinking the central well into the floor in the proposed design. 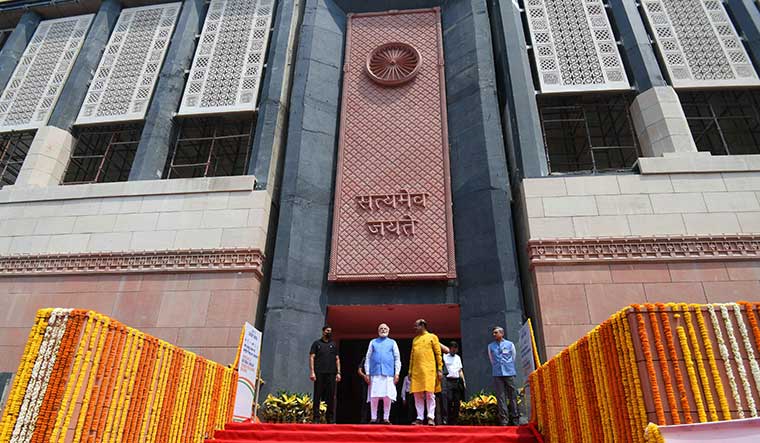 Men behind the mission: Prime Minister Narendra Modi and Lok Sabha Speaker Om Birla at the new Parliament for the unveiling ceremony of the national emblem in July | PIB

The new Parliament will be a green building equipped with necessary facilities for environmental and energy conservation. It will also be earthquake-resistant and has been designed for seismic zone V. Delhi-NCR falls in seismic zone IV.

Two committees were set up under the aegis of the Union culture ministry to finalise the art work that will adorn the galleries of the Lok Sabha and the Rajya Sabha and the ceremonial foyers in the building. Granite statues of personalities with great significance to the country’s history are being installed.

The new Parliament building was conceptualised in 2019 as part of the Central Vista Redevelopment Project. Its cost was originally estimated to be around Rs970 crore, but is learnt to have been revised upwards. Tata Projects had won the contract to build the new Parliament in September 2020.

In the backdrop of questions on whether the current building could have been retrofitted to meet the growing needs, it has been emphasised by the decision-makers that the Parliament house, almost a 100 years old, was designed to house the Imperial Legislative Council and not planned for a bicameral legislature. They point out that previous Lok Sabha speakers, too, had sent proposals to the government of their time for a new Parliament house to be constructed.

According to the Lok Sabha secretariat, studies have been undertaken by various agencies which reveal that to carry out structural retrofitting, re-laying of electrical and mechanical services and air-conditioning, the building will have to be vacated for 18-24 months.

It has been pointed out that the building had to be modified from time to time to a large extent to suit the purpose of a modern Parliament, and new constructions and modifications have been done in an ad hoc manner. However, over-repair and over-maintenance have led to poor condition of the building and issues of structural safety. Also, it is stated that over the years, parliamentary activities and the number of people working in the complex and visitors have increased manifold, and the building is unable to meet the requirements in terms of space, amenities and technology.

It is pointed out by the Lok Sabha secretariat that the Lok Sabha and Rajya Sabha are full to the brim and there is no scope to add seats in the event of the Parliament getting expanded. The seating arrangements in the two houses are cramped and there are no desks after the second row. Also, the central hall has a seating facility for around 440 people, and when joint sessions are held, chairs are placed in the aisles to seat members, which not only undermines the dignity of the institution but is also a security challenge as movement is highly restricted.

Former Secretary General of the Lok Sabha P.D.T. Achary said he has innumerable memories associated with the Parliament house, and while he realises the need for a new building, the old one should remain in use in some form and not be relegated to irrelevance. “Major events, such as the president’s address, can continue to be held in the building,” he said. “It reverberates with history. It has seen history getting enacted, from the transfer of power to Nehru’s tryst of destiny speech to the Constituent Assembly meetings. The grandeur of this building should be maintained. Special care should be taken to maintain the building in its pristine form.”

According to Birla, the current Parliament building and the new one will be harmonised. “It (the present building) will be used,” he said. “Offices will continue to function from it.” he said.

The new takes shape, but in the shadow of the old. 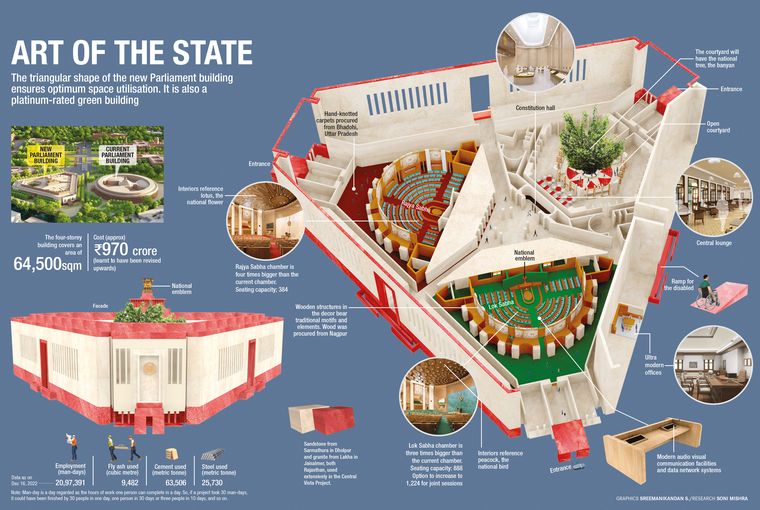