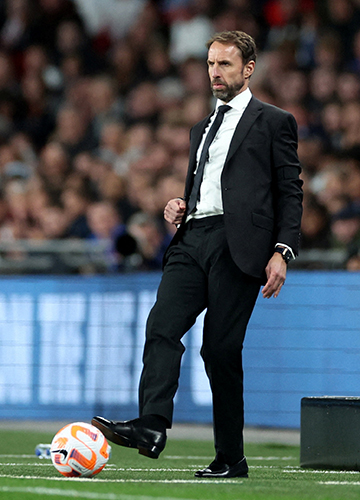 Football managers divide opinions. Many see Pep Guardiola as the best manager in the world. Some say he was just blessed with talented players and abundant funds. As opinion gets more space on social media, this is inevitable. But, there are few managers in football today who are as polarising as England's head coach, Gareth Southgate.

The former centre-back took over the national team during one of the most difficult periods in English football's recent history. After embarrassing eliminations at Brazil 2014 and Euro 2016, the English Football Association (FA) appointed Sam Allardyce as head coach to steady the ship. But, he was caught up in a corruption scandal and resigned after 67 days. Desperate, the FA turned to Southgate, then head coach of the under-21 side. He was given temporary charge of the senior team in September 2016.

Just over six years later, he is taking the team to a third major tournament, after leading it to a first World Cup semifinal in 28 years and a first ever Euro final. He is, statistically, the second-most successful England manager ever. Therefore, it is not immediately clear what is to not like. But, the criticism from a vocal section of the fan base, primarily for being overly cautious, cannot be ignored.

The success of Southgate's defensive football has been downplayed with the claim that the squad he has is the best in 20 years. Therefore, goes the argument, the runs deep into the 2018 World Cup and Euro 2020 were to be expected and that he should have won those tournaments with the talent available. The argument that this is the best team in two decades can be exposed as inaccurate pretty quickly.

For example, there is no comparison between the current centre-back options and the “golden generation” of the mid-2000s. England then had the likes of Rio Ferdinand, John Terry and Sol Campbell. All three were world-class and there were enough quality players as back-up. The left-back, Ashley Cole, had by then become one of the best in the world. The first-choice left-back for Qatar 2022 is Luke Shaw, who oscillates between phases of bad form and being borderline world-class (“Shawberto Carlos”).

In midfield, the golden generation had more quality and depth, with the likes of Steven Gerrard, Frank Lampard and Owen Hargreaves. In attack, the situation is similar, with world-class first-choices―the pairing of Wayne Rooney and Michael Owen then, and Harry Kane nowbut with no back-ups of comparable calibre. The squad is now better in the goalkeeping department, at right-back and on the wings, especially with regard to strength in depth (there was no back-up of a similar quality to David Beckham).

Overall, it is clear that the team now is not as good on paper as the golden generation. That team was eliminated in the quarterfinals of Euro 2004 and the 2006 World Cup and then failed to qualify for Euro 2008. Therefore, Southgate, 52, has overachieved with the current crop of players.

Lampard recently said that the criticism of Southgate was harsh. “I am not going to sit here and say that people cannot criticise,” he said. “If things are constructive and people have opinions, great. But, once this World Cup begins and, during the build-up, it would be great if everyone can really get behind the team and Gareth.”

However, Southgate's team has not made that easy to do. It has not won in its last six matches; the 4-0 thrashing by Hungary in June was its worst home defeat in close to 100 years. And the issues have mounted up in recent times, with injuries to wing-backs Reece James and Ben Chilwell. Southgate favourite Kyle Walker is recovering from an injury and if he is not fully fit, it could upset the defensive balance­ ―Walker is the fastest English defender. Another Southgate favourite Harry Maguire has made his comeback from injury, but his form was worrying even before the injury.

Despite a barren run and the problems in defence, this remains an extremely talented group. The creative options are sure to be the envy of many managers, with the likes of Rahim Sterling, Phil Foden, Bukayo Saka, Mason Mount and Marcus Rashford to call upon. Declan Rice and Jude Bellingham are two of the finest young midfielders in world football. Captain Kane, the 2018 golden boot winner, needs only two goals to surpass Rooney's national record and it would be a surprise if he does not do it in Doha. In goal, Jordan Pickford has been a star performer.

The fact that the team's strength lies in attack is, ironically, worrying many fans. They think that Southgate is not capable of getting the best out of the creative players. The empirical evidence so far lends credence to this fear. But, it is also a fact that not many teams steamroll their way to a World Cup trophy. The last such dominant champions were probably 1970 Brazil. As Lampard said: “I remember the fantastic French team that won the last World Cup without really playing beautiful football.” Though there is pressure from the fans to attack, the key question is whether they will take a good run with boring football. The answer is a resounding yes, and Southgate and his senior players have the tournament experience to deliver.

England, ranked five, is in a group that looks fairly straightforward―with Iran, the US and Wales. But, things will get much more complicated if the English team does not win its first match against Iran.

Southgate has set the bar high this time. He told La Repubblica that the team would be disappointed not to reach the World Cup final. And though he has a contract till the end of 2024, he is well aware that the performance in Qatar will decide his future. He has said: “I am not arrogant enough to think that my contract is going to protect me.”