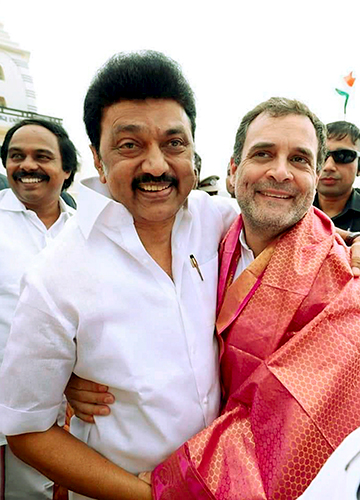 On September 5, when Tamil Nadu Chief Minister M.K. Stalin got his counterpart from Delhi, Arvind Kejriwal, to launch Pudumai Penn—a financial assistance scheme for poor girl students which is quite close to his heart—political circles were abuzz with rumours about possible changes in the alliance equations in the state. After all, the Delhi CM is a well-known critic of the Congress, the DMK’s most prominent ally. However, after seeing Kejriwal off, Stalin travelled to Kanyakumari to flag off Congress leader Rahul Gandhi’s Bharat Jodo Yatra, putting an end to all speculation. The two leaders hugged each other and walked together to the Gandhi Mandapam in Kanyakumari for a prayer meeting before the yatra commenced.

Rahul and Stalin are known to share a warm bond. At a public rally in Kanyakumari during the 2021 assembly elections, Stalin opened up about his friendship with Rahul. “Sometimes during our telephone conversations I call him ‘sir’ and he would immediately ask me to address him as brother,” said Stalin. The brotherhood was on full display at the launch of the yatra, sending a strong message to friends and foes that the Congress and the DMK would remain staunch allies.

The DMK and the Congress have been allies since 2004, the longest such partnership in Tamil Nadu’s political history. While the two parties parted ways in 2014, they got back together again, after having realised the importance of staying together. While the Congress is not a force in Tamil Nadu to win an election on its own, it has a strong vote bank in certain pockets in south and west Tamil Nadu. Several Congress leaders pointed out that Rahul should have spent more time in Tamil Nadu as the four days allotted was not enough to enthuse cadres across the state.

Stalin’s presence at the yatra is a part of his strategy to tell his detractors and supporters that the DMK’s anti-BJP credentials were intact. “A false narrative is being spread by our detractors and the chief minister is proving them wrong. We are with the Congress,” said DMK spokesperson Rajiv Gandhi.

Although Stalin enjoys warm ties with regional satraps like West Bengal Chief Minister Mamata Banerjee and Telangana Chief Minister K. Chandrashekar Rao, he knows that an alliance with the Congress helps him the most both in Tamil Nadu and in Delhi. “The Congress needs the DMK and the DMK needs the Congress at the national level. Stalin, more than any other leader, is aware of the equations,” said P. Ramajeyam, a political observer. Interestingly, during the 2019 Lok Sabha elections, Stalin called Rahul the prime ministerial candidate of the United Progressive Alliance even though the Congress chose not to do so. “The Congress did not win. But the move helped the DMK,” said Ramajeyam.

The Congress, meanwhile, knows that being a part of the DMK alliance can help it hold together its vote base in the state. Sriperumbudur MLA K. Selvaperunthagai, who walked with Rahul for the yatra from Kanyakumari to the Kerala border, said, “The DMK, as always, is in full support of the Congress. I don’t think this will change at any point of time.”

Stalin also offered all possible administrative help for the yatra. The government machinery, especially the transport and the home departments, worked in tandem with Congress leaders. “I am thankful to all government departments for quick approvals for various events related to the yatra,” said Kanyakumari MP Vijay Vasanth. Quick permission was given for allotting 265 buses to ferry Congress workers from across the state to Kanyakumari. The transport department facilitated talks with private bus owners to arrange the buses. The home department handled traffic diversions and security arrangements at Kanyakumari and Nagercoil.

During the four days in Tamil Nadu, Rahul listened to activists and representatives from civil society groups and interacted with women from self-help groups. “The yatra will unite like-minded people,” said T. Ravidev, social media in-charge of the Congress in Puducherry. “The people of Tamil Nadu like Rahul Gandhi much more, compared with Narendra Modi.”