The wrangle over freebies is unlikely to be settled soon

Freebies are a tricky issue for all parties In 2016, Prime Minister Narendra Modi ignited a national debate on holding elections simultaneously to the Lok Sabha and state assemblies with a catchy slogan: 'one nation, one election'. It made financial sense, as thousands of crores of rupees are spent on elections. Though the Election Commission acquiesced in the idea, it was rejected by the opposition parties, especially the regional parties which saw it as an assault on federalism and an attempt to undermine them.

As the nation moves towards another round of assembly elections, and with the 2024 Lok Sabha polls in sight, the BJP has riled the opposition parties again by igniting a debate on freebies. Modi derided them as revdi (sweetmeat made of jaggery and sesame seeds, usually consumed in the winter)—the crumbs promised during election campaigns like free power and water, with little long-term benefits.

Unlike the idea of 'one nation, one election', which moved through a slow consultative process (the Law Commission will study it), the issue of freebies has been fast-tracked, as the matter was taken up by the Supreme Court on a PIL filed by Ashwini Upadhyay, a BJP member who started his political career with the Aam Aadmi Party. “We want the court to set up a panel to examine the practice of making electoral commitments (freebies) without adequate budgetary provisions,” he said. “There should be a comprehensive policy to reduce debt to GSDP ratio of the states; and an economic impact assessment module should be published before any freebies are announced or distributed by the political parties, and even the source of revenue generation should be disclosed.”

The debate has its origins in the economic crisis in Sri Lanka and the global economic slowdown that prompted the Union government to advise fiscal prudence. The issue was first flagged in April in a meeting of secretaries with the prime minister. In July, at the inauguration of the Bundelkhand Expressway in Uttar Pradesh, Modi used the colloquial term revdi to drive home his point and start a national debate. Three days later, during an all-party meeting on Sri Lanka, economic affairs secretary made a presentation on freebies. The Reserve Bank also studied the issue of public debt and freebies in its June report.

“For the five most indebted states, the debt stock is no longer sustainable, as the debt growth has outpaced their GSDP growth in the last five years. New sources of risks have emerged—relaunch of the old pension scheme by some states; rising expenditure on non-merit freebies; expanding contingent liabilities; and the ballooning overdue of DISCOMs—warranting strategic corrective measures,” said the RBI report.

While it makes sense to take a second look at the freebie culture, it also raises the crucial question of what defines a freebie or a social welfare measure. Social welfare measures have helped the poor, and freebies often come in handy for those facing economic distress. 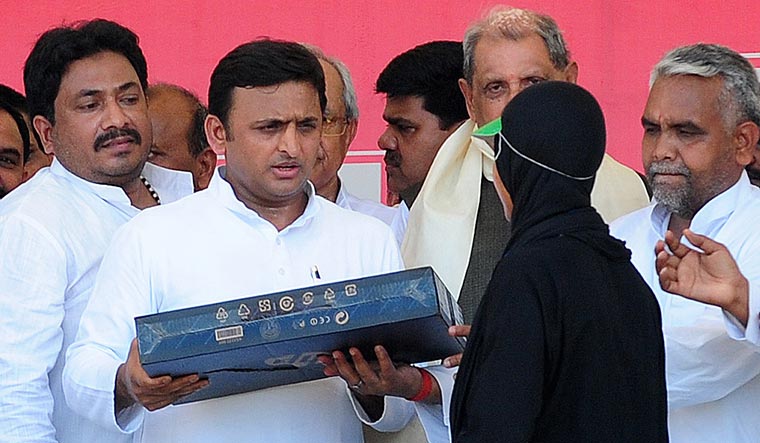 All parties have been promising everything from free power and water to scooters for students. The Central government gives Rs2,000 a year to farmers, apart from free ration as per the Food Security Act. But the AAP government in Delhi took it to another level by giving free electricity up to 300 units, free water and stipends for women, forcing other parties to catch up. The AAP won the Punjab elections with this promise, as the electorate seemed disillusioned with the other parties.

In Tamil Nadu, freebies are the norm. They changed the fortunes of the M. Karunanidhi-led DMK in 2006. In the next elections, his rival J. Jayalalithaa promised free mixer grinders and a host of financial aids to women and farmers, and won the state back. Many states in the Hindi heartland give out financial assistance for the marriage of women from poor households. In Odisha, the BJD government gives rice at Rs1 a kilo to the needy, which, it says, has been instrumental in uplifting the poor.

“Tamil Nadu has been following the practice of giving out things, which others call freebies, since the 1970s when Karunanidhi was the chief minister. These have changed the lives of people. They cannot be called freebies. The non-BJP governments have to take care of the socially and economically backward people. In the BJP ruled states, they do not do that; instead, they are favouring the corporates,” said R.S. Bharathi, DMK organisation secretary. The DMK, the AAP and the YSR Congress Party have requested the Supreme Court to hear them in the case.

Andhra Pradesh chief minister Jagan Mohan Reddy's YSR Congress Party in its application said it was unfair to term all welfare measures freebies. It said the state's programmes such as Amma Vodi and Rythu Bharosa were called freebies in total disregard of their purpose and impact.

The Congress, which toyed with the idea of universal income guarantee as an election promise, came down heavily on the BJP for triggering the debate on freebies. “Is the government terming providing foodgrains to 80 crore poor under the Food Security Act as revdi culture? The banks in the past five years have written off loans worth Rs10 lakh crore. Why is the government silent on this? The government provides work under MNREGA to people in distress. Was this freebie, too? Wasn't the reduction in corporate tax rates announced by the government in 2019 also a freebie?” asked Congress spokesperson Gourav Vallabh.

It is a tricky issue for the BJP, as the opposition can spin it as anti-poor in election campaigns. “We must understand the difference between a freebie and a social welfare scheme,” said BJP spokesperson Gopal Krishna Agarwal. “The welfare schemes are targeted at the weaker sections as we are required under the directive principles, which say the welfare of the people is the responsibility of the state. But freebies are for all, without economic consideration. In Punjab, free power was promised to everyone when the state has a debt of Rs3 lakh crore. In Delhi, the state government is not paying the power companies and in the process turning them into regulatory assets (previously incurred expenditures that can be recovered from consumers by regulatory authorities through tariff revision). These are freebies.”

The BJP brushed aside the opposition charge of loan waivers given to corporates. “A person who has been declared defaulter would have to pay up when he gets money; nothing has been written off. We are strengthening the public sector banks. Moreover, the loans were given during the UPA government,” said Agarwal.

The Supreme Court, too, has a difficult task ahead, as it deals with the debate over social welfare and fiscal prudence. The political class on its own is unlikely to address the issue, given the electoral considerations. So the court-mandated panel may go into the debate and suggest some guidelines, but even that is not going to be an easy road.

The opposition smells a ploy by the government to take the court route. “It has been Modi's modus operandi since his days as Gujarat chief minister,” said Bharathi. “If there is something he cannot do, he will take the court order and put the blame on the court. They want to centralise everything. They want to usurp the powers of the states.”

The political slugfest over freebies is likely to escalate in the days to come. And it is unlikely to be settled until a clear line is drawn between freebies and welfare schemes.