Gujarat: Kejriwal taking up issues that affect voters the most

The move is drawing considerable support, forcing the BJP to react 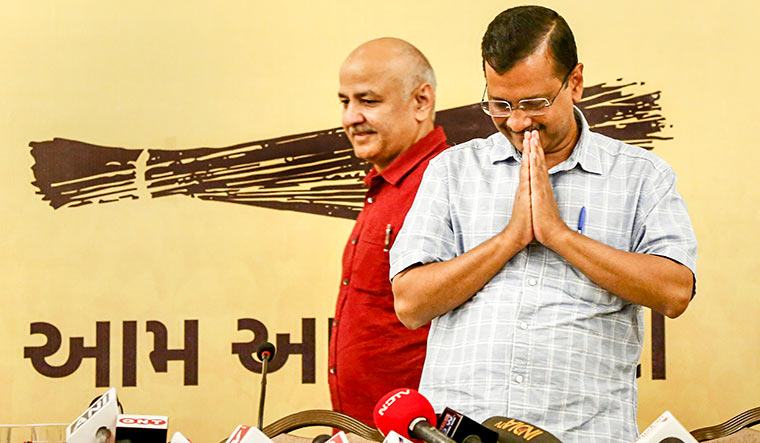 Fighting spirit: Arvind Kejriwal and Manish Sisodia at a news conference in Ahmedabad on August 22 | PTI

After being in power for nearly three decades—and with the active support of Prime Minister Narendra Modi and Union Home Minister Amit Shah—the Gujarat BJP should have been in a comfortable position as it prepares for the assembly elections to be held by the end of the year. That is not the case, however, this time around. The BJP, which is known to set the election agenda and force the opposition to react, appears to be on the defensive, thanks to an unusually aggressive Arvind Kejriwal and his Aam Aadmi Party.

When Kejriwal promised 300 units of free electricity every month for the people of Gujarat, Modi came down heavily against freebies, calling it revdi culture, after a popular north Indian sweet. In fact, the Supreme Court is now hearing a public interest litigation against the practice of political parties offering freebies.

On social media, a war is under way. There is a campaign, believed to be supported by the BJP, which says that the public's money collected as tax should not be given away as freebies. The AAP said freebies are given to a select few and something that is beneficial for all could not be called a freebie. As the war of words has intensified, the AAP leadership is facing increasing scrutiny from Central agencies like the Enforcement Directorate and the CBI. Despite the challenges, the AAP is pushing ahead with its aggressive campaign in Gujarat, a state where a party other than the BJP or the Congress has never succeeded in an electoral battle.

The AAP's preparations for the 2022 assembly polls started even before the municipal corporation elections were held last year—the party surprised everyone by bagging 27 seats in Surat. The good performance in the municipal elections and the victory in the Punjab assembly polls have given the AAP campaign in Gujarat a major boost. Interestingly, Kejriwal now visits Gujarat more frequently than Modi. In the past five months, he made 14 trips. And during every visit, he makes it a point to announce a “freebie”, causing consternation among BJP leaders and cadres.

While Kejriwal publicises his offers at town hall meetings, his state-level leaders address public meetings across Gujarat, and party cadres campaign at the grassroots level. It is on the basis of such meticulous work that the AAP announced last month its initial list of 19 candidates for the assembly polls. Kejriwal wants the electorate to know his candidates and has asked them to engage with the voters and familiarise them about the AAP's welfare schemes, said Isudan Gadhvi, national joint general secretary of the AAP.

Sagar Rabari, a farmers’ rights activist who recently joined the AAP, said he had already started visiting voters' homes. “The idea is that there should not be a single voter who has not seen the candidate in his constituency. This will be followed by public meetings as the election approaches,” said Rabari, who is contesting from Becharaji in Mehsana district.

Kejriwal seems to be taking up issues that affect people the most and is drawing considerable support, forcing the BJP to act. The Gujarat Police, for instance, had been demanding a revision in grade pay. During one of his visits, Kejriwal promised a hike and most members of the force put up his message on their social media accounts. Within four days, the Gujarat government announced an increase in allowances for the police.

Gujarat, touted as the BJP's model state, suffered a dent as the AAP and the Congress came up with facts and figures highlighting the failures of its educational system, including poor infrastructure and the absence of adequate number of teachers. Kejriwal, meanwhile, has made multiple offers like free education, 10 lakh new jobs, a monthly allowance of Rs3,000 to unemployed youth and Rs1,000 for women.

The uneasiness among BJP leaders is clear as they worry that the AAP could eat into their party's vote share. Holding on to power with a good number of seats is very important for the BJP and Modi, considering that the Lok Sabha elections are due in two years. If the party is not able to perform well in the assembly elections, they fear it will send a wrong signal at the national level. “People are fed up with the BJP and they now have a third option,” said 34-year-old Parth Vyas from Ahmedabad. Gadhvi said the AAP's network up to booth level would be ready in the next few days. Through internal surveys, the party has reportedly figured out how much has it been able to eat into the vote share of the Congress and the BJP.

In every meeting he attends, Kejriwal emphasises that he does not know how to do politics and that he will implement in Gujarat whatever he has promised. “We have done it in Delhi and we are doing it in Punjab. We know how to do things,” said Kejriwal.

Gujarat AAP president Gopal Italia said he was confident that the people of Gujarat would support Kejriwal’s vision. “We are focusing on all 182 seats,” he said. Party sources, however, clarified that the focus was really on around 75 seats, which it believes are winnable. But not everyone is convinced about the AAP's prospects. Political analyst Hari Desai said the party was just creating a lot of noise. “The AAP will surely eat into the vote share of the BJP and the Congress,” he said. “But it is unlikely to emerge as a serious contender.”