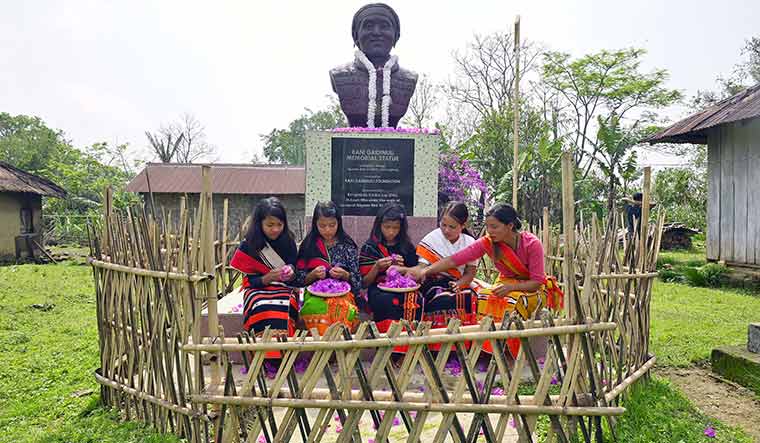 In February 1891, Dr Denis Francis Keegan, a surgeon major of the Bengal Army posted in Indore, published a paper in the medical journal Lancet, describing his experience in nasal reconstruction surgeries. The article detailed the use of lining flaps in rhinoplasty, which was not documented before, and explained how the procedure was used for sociological reasons as the number of chopped nose cases were much higher in India at the time.

One of Keegan's patients mentioned in the article was a “Mahratta Brahmin”, and the caption given to his photograph had some interesting details. “This man's nose was cut off by the order of Tantia Bhil, a notorious dacoit and robber. My patient was a respectable Mahratta Brahmin, and was one of the principal witnesses in the case. Tantia's surprise, when he confronted the Brahmin whose nose had been restored before he entered the witness box, was very amusing,” wrote Keegan.

Tantia's reputation had travelled far and wide even before Keegan wrote about him. The New York Times had carried a front page report on his trial in 1889. “Tantia Bhil, the bold Robin Hood of the Central Provinces in India who was recently captured, has just made a full confession,” wrote the Times. Tantia had displayed leadership qualities from childhood and took the lead in solving the problems faced by his community. “He was forced into robbery as his land was usurped. The money and food he looted went to the poor. He helped poor girls to get married and was fondly called mama (uncle) Tantia Bhil,” said Jagdish Joshila, an activist who wrote a book about him. “The British police set up a special force to arrest him and announced a bounty of 05,000 and a thousand acres, but he eluded them for several years.”

Tantia had a peculiar habit of cutting off the noses of those who targeted him. “What enhanced his aura was that he used to announce in advance the place he was going to rob, but would send his lookalikes to different locations to confuse the police. Many people believed that he could be present in multiple places at the same time,” said Joshila.

The Patalpani railway station in Indore district, which is part of a heritage line, has a temple in Tantia's memory. Loco pilots pay obeisance at the temple before making the journey into the dense forests. The Madhya Pradesh government has named the Patalpani railway station after him, and erected his statue in the town, where his body was displayed after he was hanged on December 4, 1889. 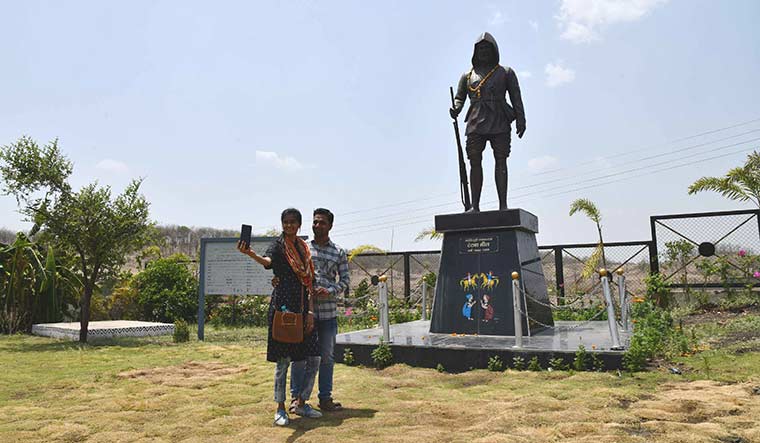 As India celebrates 75 years of independence, the Central government is focusing more on the contribution of tribal heroes. Last year, Prime Minister Narendra Modi announced that the birth anniversary of tribal icon Birsa Munda would be celebrated as Janjatiya Gaurav Divas. The government is building 10 museums to highlight the contribution of tribal icons such as Tantia, Munda, Rani Gaidinliu (Manipur), Bhima Nayak and Khajaya Nayak (Madhya Pradesh), Thalakkal Chanthu (Kerala), Alluri Sitarama Raju (Andhra Pradesh), Shaheed Veer Narayan Singh (Chhattisgarh) and Ramji Gond (Telangana). The budget allocated to the ministry of tribal affairs, which stands at 08,451 crore, has more than doubled in the last eight years.

The BJP-ruled states, too, are active in commemorating local icons. The Madhya Pradesh government has named the Habibganj railway station after Rani Kamlapati, the last Hindu queen of Bhopal, and erected a 32-feet-high statue. Kamlapati belonged to the Gond tribe, considered to be one of the biggest tribal groups in the world. A museum is coming up in the memory of tribal kings Shankar Shah and Raghunath Shah in the state, which has the largest tribal population in the country.

The tribals constitute a major demographic group, comprising 8 per cent of India's population, and the Modi government looks at them as a bloc. Traditionally, they have voted for the Congress and the regional parties, but the Modi government's relentless focus on them means that the community is not averse to making a shift. 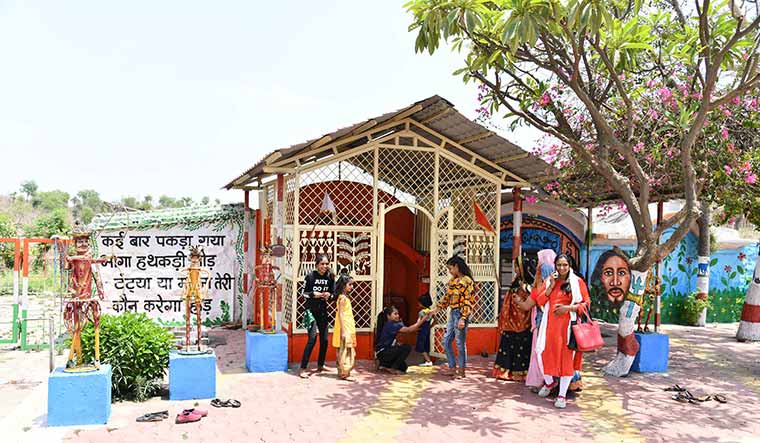 “After independence, the contribution of the tribal heroes was not taken into account because they were adivasis. But Modi ji understood their role, and insisted that their contribution be highlighted,” said Samir Oraon, member of the Rajya Sabha and the BJP's Scheduled Tribe Morcha chief.

The BJP's ideological parent, the RSS, has been working among tribals for a long time to bring them into the Hindu mainstream. “Even when the BJP was not in power, it was the larger BJP vichar parivar (those following the BJP's line of thought) that brought out Rani Gaidinliu's contributions, Bhagwan Birsa Munda's name and the importance of icons like Bhima Nayak and Thalakkal Chanthu,” said Oraon.

Gajendra Patel, BJP MP from the Khargone reserved seat in Madhya Pradesh, said the BJP and the RSS had been working to integrate the tribals into the mainstream. “We started by telling them about keeping their places of worship clean and building temples. We asked them to focus on their traditions, keeping them in consonance with the Hindu mainstream. The tribals believe in jal, jangal and jameen (water, forest and land). They have their culture aligned with nature. This is also what sanatan dharam is all about. The adivasis have the Hindu way of life,” he said.

For the BJP, the absence of enough icons of its own has been a major problem. The Congress, which played the dominant role in the freedom struggle, never faced a dearth on this account. The lack of icons had limited the BJP's appeal across the country, till it found a way to overcome this issue. It started with appropriating the legacy of Vallabhbhai Patel, Subhas Chandra Bose and B.R. Ambedkar after the party retook power in 2014.

This constant hunt for new icons has now extended to celebrating and adding new personalities. In this process, it is looking for icons with local appeal, and who may not be well-known nationally. “Their names were not in textbooks, not in museums or even in art. We have found them. We traced oral histories and held talks and discussions to bring out their contributions,” said Oraon.

Tribal experts see a push towards hindutva as the government picks up these icons. “Of course there is a political motive. Birsa Munda is projected as an anti-Christian fighter and a champion of the adivasi movement in the colonial times,” said Bhangya Bhukya, who teaches history at the University of Hyderabad. “He is presented as just a tribal leader. There were many non-tribal Vaishnavites who were his followers. Ramji Gond organised the Rohillas to attack the British army. His fight was part of the 1857 revolt. He mobilised all sections of people, but he is presented as one who fought just the Nizam.”

As Telugu revolutionary hero Komaram Bheem is appropriated by the BJP and the RSS, and his character celebrated on the silver screen in the hit film RRR, the tribal icon has found his way into the national consciousness. “However, the way Telugu films have treated him and other icons has been unfortunate. People who have not read the real history will believe it. In a subtle manner, they are enforcing hindutva politics and celebrating heroism. They are destroying history,” said Bhukya.

Despite being politically silent, the tribals play an important role in determining the winners of several assembly elections and even some Lok Sabha seats. However, as a voting population, they have not been a pressure group like the dalits, who had their icon in Ambedkar, and political parties like the Bahujan Samaj Party.

The tribal societies remain largely conservative, so it is not easy to reach out to them. As they are quite localised and territorialised, they do not have a common leadership. “Not much attempt has been made to promote leaders from among them by political parties, be it the Congress, the BJP, the left or even the Maoists,” said Bhukya.

The tribal communities get inclined towards hindutva largely because of cultural reasons. “The academic reading is that communities have a strong cultural cohesion and cultural bond. There are missionaries and Maoists, but both campaigned against cultural symbols and traditions. Now, the BJP and the RSS tell them about their cultural roots, so they are easily connected to their old traditionalist aspects,” said Bhukya.

Experts also point out that the tribals have been exposed to Vaishnavism and puranic literature in the past. That is why many tribals have puranic names. In states with significant tribal populations, the sangh parivar is wooing them by building Hanuman statues and temples, highlighting his tribal roots.

While Munda, Bheem and Bhil have emerged as key figures in the pantheon of tribal icons celebrated by the saffron family, one name stands out: Rani Gaidnliu. She was a Naga leader from the Rongmei tribe who fought against the British. In 1927, at the age of 13, Gaidinliu joined the Heraka movement, which was launched to revive the Naga tribal religion. Three years later, she was arrested and was sentenced to 14 years in jail. It was Jawaharlal Nehru who gave her the title ‘Rani’ when he went to meet her in jail in 1937.

THE WEEK visited Gaidinliu's native village Nungkao in Manipur's Tamenglong district. The foundation stone for the upcoming national tribal museum in her honour was laid by Union Home Minister Amit Shah at the village last year. “When a new system came through the colonial rule, it brought a new culture and religious identity. Rani ma knew that it was going to threaten the traditional identity of the tribals. She resisted it as she believed it would affect their traditions,” said Aphun Kamei, who teaches sociology at the Delhi School of Economics. “The British divided us, but Rani ma wanted to save our culture and traditions. Her point was that we should not forget our traditions,” said Guanglungrei Pamei, Gaidinliu's relative. “She was difficult to catch as she had divine powers,” said Akhuan, a member of the Gaidinliu tomb committee.

“Rani ma used to pray before god, offering chicken as sacrifice. And she opposed the missionaries. Later, the RSS and the VHP came around to help her,” said Lungdaini, a teacher at the lower primary school in the village. The school was set up by the VHP to teach tribal children, and keep them from converting to other faiths. Gaidinliu's legacy is propagated by the VHP across the country, projecting her as an icon who stopped conversion. This RSS outreach has helped the BJP in recent years.

Kamei, an expert on tribal issues, said the BJP's rise had been phenomenal in the northeast. “Here the party has kept its focus on development,” he said. “It has not stressed on one culture, one identity and one religion as its leaders know that it will not work in the northeast.”