A day with the Santhals

Simple folk, they are known for their nature worship and colourful culture 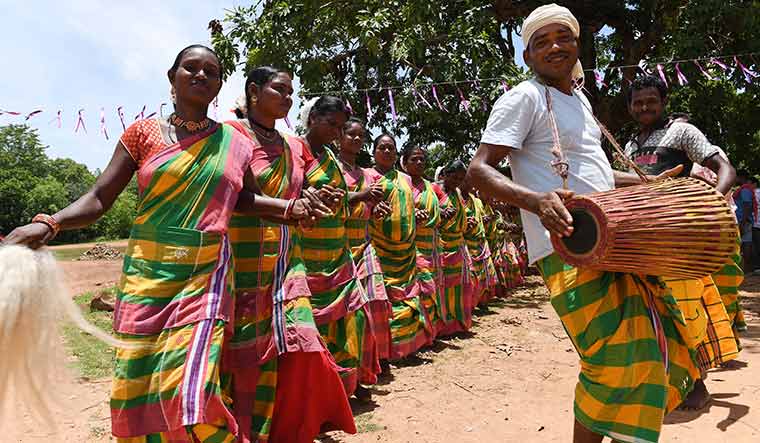 In tune with nature: The Santhals are known for their vibrant folk dance | Salil Bera

WHAT HAS A nest at the top and an egg at the bottom? The riddle was thrown at the bridegroom’s entourage waiting outside the bride's village. The girl's family wanted to have the upper hand before the wedding, and hence the challenge. But their hopes were dashed as someone from the boy's side came up with the answer: “mahua flower”. After having won the contest, the groom's team was allowed to proceed to the bride's house. It was one of the many moments recollected by the people of Rakhadi village in Odisha when THE WEEK team visited them. The entire population of Rakhadi is Santhal. Riddles form an important part of Santhali customs, especially during weddings. “If the groom's team fails to answer, they will have to accept defeat publicly. The bride’s side will then gracefully welcome them,” said a villager.

Santhals are spread across Odisha, Jharkhand, West Bengal, Assam and Bihar. They are proud of their rich culture and they prefer to live in the lap of nature. To get a ringside view of the Santhal way of life, we spent a day at Rakhadi, nestled in the lush green mountains of Mayurbhanj district.

Tulsidas Hembram is one of the few villagers who can speak in Hindi. He had a love marriage, a rare occurrence among the Santhals here. “My wife eloped with me without telling her parents. She was from a neighbouring village. As soon as we returned to my village, I took her to the village elder, who asked for her consent and then got us married.” Adhering to local customs, a messenger from his village went to the girl’s village and told her family that there was no need to search for her as she was already married. Responding positively to the turn of events, a few members of her family then visited Hembram's village and took part in the festivities.

In the case of arranged marriages, if both parents of the bride are alive, they are gifted a cow and a goat as bride price. If only one parent is alive, the family receives either a cow or a goat. The traditional divorce system is quite simple. The wife just has to give back the wedding ring to the husband and kick a tumbler filled with leaves and water to mark the separation.

The Santhal settlement of Rakhadi is on an elevated terrain. A group of men guided us on a trek to a plain area atop a hill. On one corner of the levelled surface was a tall sal tree and underneath it was a shelter made of straw, with a stone inside. This is called jahira or the place of worship. During festivals and special occasions, villagers make their way up to this spot to pray. Santhals, like most other adivasis, worship nature.

A Santhal home is incomplete without a bow and an arrow. “This is our gun,” said Somu, a farmer, while shooting an arrow at a target. They use a pointed metal arrow to kill bigger animals, and a blunt arrow to knock out birds. Children learn hunting when they are seven or eight.

The Santhals are known for their vibrant folk dance. There are broadly two types of dance forms—a welcome dance and another one performed during festivals. We watched a performance in which 25 women in colourful saris tapped their feet and moved their hands. They moved to a spot where two peacock statues were worshipped, even as a few men carrying a goat, a bow and arrow, a pot and a musical instrument joined them. They danced in a circular formation to the tune of drumbeats. A young boy wearing a dhoti and turban blew sakva, a musical instrument made of buffalo horn. Maina Murmu, who wore peacock feathers on her head, effortlessly lifted a dhagra, a decorative item weighing around 20kg, during the performance. “I am used to lifting it to my head. I can dance with it for two or three hours at a stretch,” she said.

When a child is born, no weddings are allowed in the village for three days. Whether it is a birth, death or a wedding ceremony, the entire village comes together like a family and celebrates it. It is a popular belief among Santhals that meat and fish cannot be eaten together except during the days of mourning.

Tribal cultures would be incomplete without their unique food habits. The local delicacy is pakhal bhat which is prepared by fermenting cooked rice with water. Rice beer called hadia, which is made with a dozen herbs, is a popular drink.

“The Santhals are content with their lives. They are never jealous or greedy,” said renowned Santhal writer and researcher Damayanti Beshra, who received the Padma Shri in 2020. “Today, there are close to 500 writers from our community. When I started, there were only one or two publishers who were willing to publish my books. The situation is very different now because of technology and latest software,” she said.

Most of the men and women of Rakhadi are engaged in farm work. A few are into trading. The women, of late, have been nursing the secret ambition of entering politics. “I want to meet Droupadi Murmu once,” said Saraswati Soren, a middle-aged woman. She and many others are inspired by Murmu.

None of the Santhals we met showed any interest in migrating to cities or making more money. As darkness engulfed Rakhadi, it was bedtime for Santhals, as they believe in sleeping early so as not to disturb the surrounding wildlife.