Shehbaz Sharif, the top choice to replace Imran, steps out of his brother’s shadow

Opposition unity may, however, last only till elections are announced 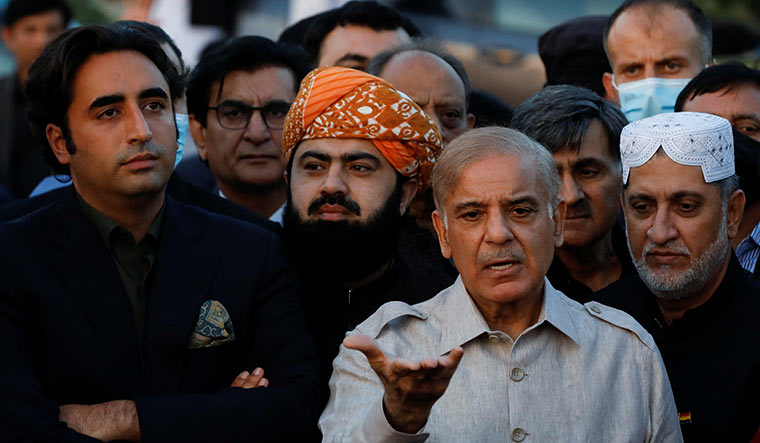 In the fall of 1999, when General Pervez Musharraf found out that prime minister Nawaz Sharif was planning to sack him as army chief following the Kargil misadventure, he moved quickly to meet Punjab chief minister Shehbaz Sharif. Musharraf told the younger Sharif that the army wanted him to replace his elder brother as prime minister. But Shehbaz made it clear to the general that he would never betray Nawaz. A few days later, Nawaz ordered Musharraf’s dismissal, but the army deposed the two brothers in a quick, bloodless coup. A year later, they were banished to Saudi Arabia.

It was not just the army that had tried to turn Shehbaz against Nawaz. According to senior journalist Hamid Mir, back in 1992, when Shehbaz was just a junior member of parliament, president Ghulam Ishaq Khan offered him the top post after a tiff with Nawaz. The Benazir Bhutto government even jailed Shehbaz in 1995 to force him to testify against Nawaz in a corruption case. But Shehbaz has always placed fraternal loyalty above everything else and has spent his three-decades-long public life in his big brother’s shadow.

Shehbaz was born on September 23, 1951 in Lahore, to industrialist and businessman Muhammad Sharif and Begum Shamim Akhtar. He joined the family business after his graduation from Government College, Lahore.

Shehbaz started his political career by winning an election to the Punjab provincial assembly in 1988 on a Pakistan Muslim League ticket. Nawaz was then the province’s chief minister. In 1990, when Nawaz became prime minister, Shehbaz was elected to the parliament. Shehbaz, however, focused more on Punjab and became the province’s chief minister in 1997, the same year his brother was elected prime minister for the second time.

Upon his return to Pakistan in 2007 after the seven-year exile in Saudi Arabia, Shehbaz rejoined active politics and became chief minister of Punjab in 2008. He served two consecutive terms till 2018. When Nawaz was removed as prime minister in 2017 on corruption charges and was barred by the supreme court from holding any constitutional posts, Shehbaz was chosen to lead the PML (N). But he lost the 2018 national elections to Imran Khan, who had the backing of the army. He has been serving as leader of the opposition and president of the party since then.

Apart from his loyalty to his brother, another hallmark of Shehbaz’s politics has been the friendly ties he shares with the army. Nawaz himself conceded that had Shehbaz known about his decision to act against Musharraf, he would have talked him out of it. In 2014, when Nawaz wanted to travel to India to attend the swearing-in ceremony of Prime Minister Narendra Modi, it was Shehbaz who convinced army chief General Raheel Sharif to greenlight the visit. With the army now trying to distance itself from Imran, Rawalpindi is likely to consider Shehbaz to be a safe bet as prime minister.

Shehbaz’s reputation as an efficient administrator, too, may come in handy. “During his three stints as chief minister of Punjab, he was known for his hands-on style, marked by surprise visits to schools and hospitals, early morning staff meetings and late night social media messages to his officers,” said Ejaz Ahmed, a Karachi-based journalist. Erring and underperforming officials were often summarily punished.

Shehbaz is also known for his penchant for massive infrastructure projects, such as the Lahore Metro. Despite his habit of quoting revolutionary verses by leftist poet Habib Jalib, Shehbaz has never loathed the fruits of capitalism.

There were rumours that he once ordered the construction of a bridge in Lahore so that he could reach his new wife’s house quickly. According to official records, Shehbaz was married twice—to his cousin Nusrat Shehbaz in 1973, and to author and activist Tehmina Durrani in 2003.

On the foreign policy front, Shehbaz maintains close ties with important strategic partners like China and Turkey. He is an enthusiastic backer of the China-Pakistan Economic Corridor and President Xi Jinping’s Belt and Road Initiative. “Compared with many other Pakistani politicians, Shehbaz enjoys better ties with India, at least with certain industrialists. He has visited India a few times,” said Joshy M. Paul, international relations expert at the Delhi-based Centre for Air Power Studies. “His foreign policy, like his domestic policy, is expected to be marked by pragmatism.”

Despite all the advantages he enjoys, ascending to the top post and staying there may not be an easy task for Shehbaz. Both Shehbaz and his son, Hamza, who is the leader of opposition in Punjab, are facing investigation on corruption charges. The duo was indicted by the UK for money-laundering in 2020, but were let off as investigators were unable to furnish any proof. In Pakistan, however, the cases are going on and Shehbaz could face arrest any time.

The simmering rivalry between Nawaz’s daughter, Maryam, and Shehbaz’s son, Hamza, could also turn out to be a major challenge. On the personal front, Hamza and Maryam, both in their late forties, appear to be close. Videos of the two cousins singing old Bollywood numbers during Maryam’s son Junaid's wedding reception held in London in December have gone viral. Shehbaz, too, is known for breaking into songs occasionally, sometimes during public functions. But those right notes may not always extend to the political arena.

“Up until a few years ago, the succession plan in the PML(N) looked settled with Hamza being groomed to take over after Nawaz and Shehbaz,” said Saleema Nazki, a US-based Pakistani researcher. “But with Nawaz unabashedly promoting Maryam, Hamza is rattled, and the stage is set for a bitter intra-family rivalry.” Maryam recently conceded that she and Hamza had differences of opinion, and reiterated that the final word in the party would be that of Nawaz.

Maryam, however, is close to Shehbaz, and did not hesitate to put forward his name as the PML(N)’s prime ministerial candidate during the ongoing crisis. “He is the most competent person. He is my hero. I love him to death,” she said about his chances. But her political equation with her uncle and cousin would be crucial for the long-term future of the party.

There have also been questions about Shehbaz’s health. He is a cancer survivor, and he himself has admitted that he suffers from low immunity and multiple ailments.

The next few months will be a tough grind for Shehbaz. The opposition, which now stands united behind him to oust Imran, may not remain so once the elections are announced. But after having survived the rough and tumble of Pakistan politics for more than three decades, Shehbaz appears to be better placed than most others to chart a new course.