Irrational policy decisions of Rajapaksas have destroyed its economy 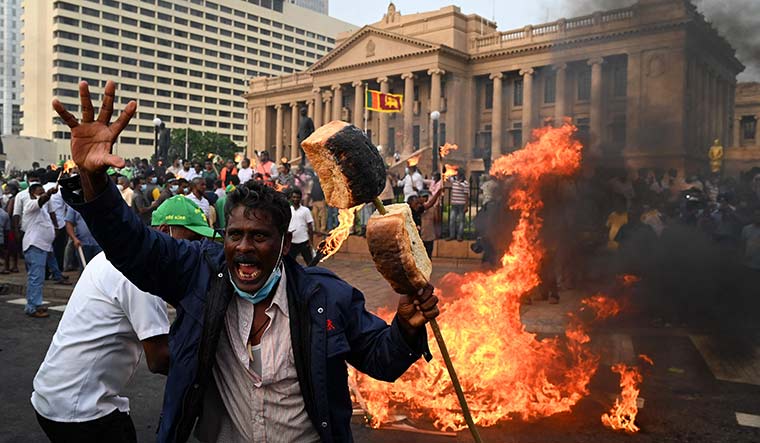 Burning issue: A protest at the entrance of the president's office in Colombo | AFP

The city of Colombo is famous for its pristine beaches, clean streets, heritage buildings, delicious cuisine and zestful people. Leaving behind the bitter memories of the decades-long civil war which ended in 2009, and the 2019 Easter bombings, the Sri Lankan capital and the rest of the country have been returning gradually to normalcy. Yet, all the progress the country has made in that journey seems to be going up in smoke as it faces a grave economic crisis, leaving it on the verge of bankruptcy.

Matters have taken a turn for the worse since January, with food and fuel prices going out of control, and now, crippling shortages. With its foreign exchange reserves nearly depleted, the island nation of 2.2 crore people is unable to import even basic necessities like rice, milk and kerosene.

President Gotabaya Rajapaksa, praised as “Terminator” by his supporters for putting an end to the civil war, said his country would work with the International Monetary Fund (IMF) to tackle the crisis. He put the blame for the downturn on previous governments. “When those who contributed to the crisis are criticising the government, I am trying to resolve it and provide relief to the people,” said Gotabaya.

But the president’s explanation has not gone down well with the people. Anger, frustration and desperation to grab whatever food and fuel is available is a common sight in the streets of Colombo. Armed forces have been deployed to oversee fuel distribution in many places.

The incumbent government headed by Gotabaya and his elder brother, Prime Minister Mahinda Rajapaksa, made a series of policy errors that aggravated the crisis, which has been in the making for a while. “The origins of the crisis go back to the trade liberalisation in 1977,” said K. Don Vimanga, policy analyst at Advocata Institute, a think-tank in Colombo. “The major problem is macroeconomic instability, tax cuts and large budget deficits financed by printing more money. Subsequent debt downgrades shut Sri Lanka out of the capital markets. The country could not refinance maturing debts or finance the current account deficit that was growing rapidly due to fiscal expansion. They then tried to fix the exchange rate and control imports, which have led to the shortages.”

After taking over as president, Gotabaya imposed import controls and implemented an ill-advised tax cut that devastated the already fragile economy. He banned the import of luxury vehicles, chemical fertilisers and spices like turmeric to prevent foreign currency outflows. Import ban on motor vehicles came into effect in March 2020. Before the ban, Sri Lanka was spending around $400 million annually on fertiliser imports. Vehicle imports were worth $1.5 billion. 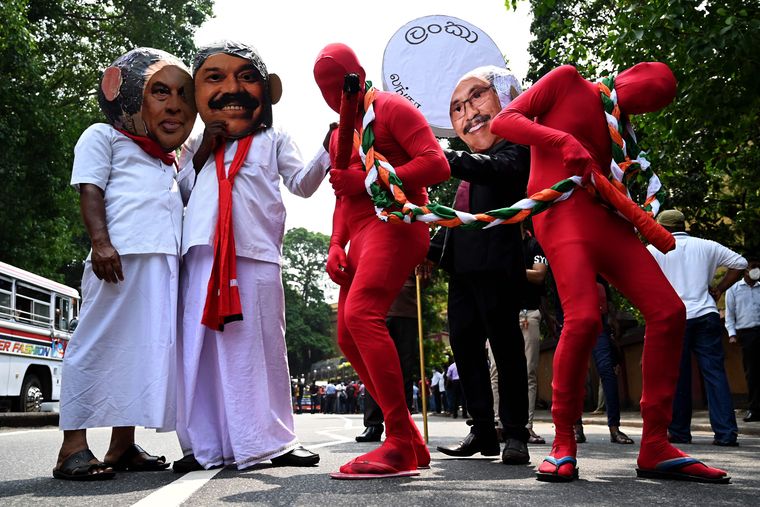 Out of favour: Leftist activists wearing masks of the Rajapaksas in a protest in Colombo | AFP

The government thought the ban would protect foreign exchange reserves, encourage domestic production and even boost exports. But the ban failed to meet those objectives, and only resulted in further depletion of forex reserves. The situation got so dire by mid-January that Sri Lanka had to sell its gold reserves and make use of its currency-swap agreements with India and China to repay a $500 million international sovereign bond (ISB) that was due for settlement.

For a country like Sri Lanka, which has traditionally depended on large-scale imports for most essential supplies, the sudden reversal of policy led to unprecedented problems. It crippled the manufacturing industries sector, especially apparels. The Sri Lankan apparel industry imports even buttons. “When imports are stopped, how can we ensure quality in exports? Sri Lanka depends on imports for raw materials,” said Kopalapillai Amirthalingam, professor of economics at the University of Colombo.

Sri Lanka had already lost much of its crucial income from tourism because of the pandemic, and the import ban and tax cuts further hurt the revenue flow. Since 2020, inflation has surged, foreign reserves have fallen by 70 per cent and the outright ban on chemical fertilisers has crippled the farming industry. The Sri Lankan Central Bank’s short-sighted monetary policy and the interest rate cap on bonds have added to the crisis. 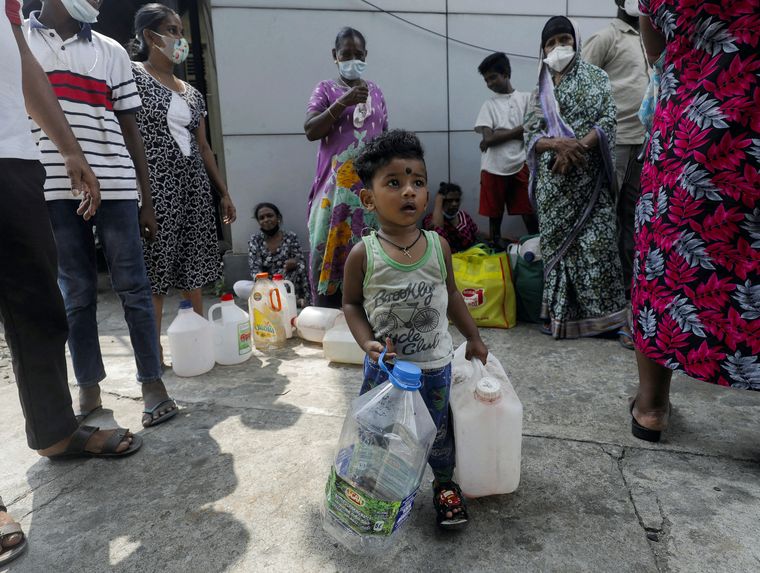 Uncertain future: A child waiting to buy kerosene with his mother at a fuel station in Colombo | Reuters

Experts also point towards a lack of discipline in handling imports. In 2021, Sri Lanka spent $6 billion importing non-essential items like cheese, butter, vegetables, fruits, ice-creams, chocolates and sauces. Mobile phone imports cost $386 million. “The primary challenge facing the country is the dollar crisis. When we earn $100, we have to pay off $115 as debt,” said Environment Minister Mahinda Amaraweera at a news conference. “Our dollar receipts are not enough even to repay our debts.”

With a $6 billion trade deficit and massive debt incurred from foreign loans, sovereign bonds and large-scale infrastructure projects, repayment is a major challenge. “We have been spending beyond our means for years,” said Ahilan Kadirgamar, political economist and senior lecturer at the University of Jaffna.

The fertiliser ban, too, turned out to be a fiasco. When Gotabaya announced the decision to transform the country’s agriculture sector into completely organic, he was hoping to save the import costs and also to protect the environment. But agricultural experts and economists had warned about food scarcity. “The ban led to a reduction in yield, which went down by 25 per cent,” said Saman Dharmakeerthi, professor of soil fertility and plant nutrition at the University of Peradeniya in Kandy. 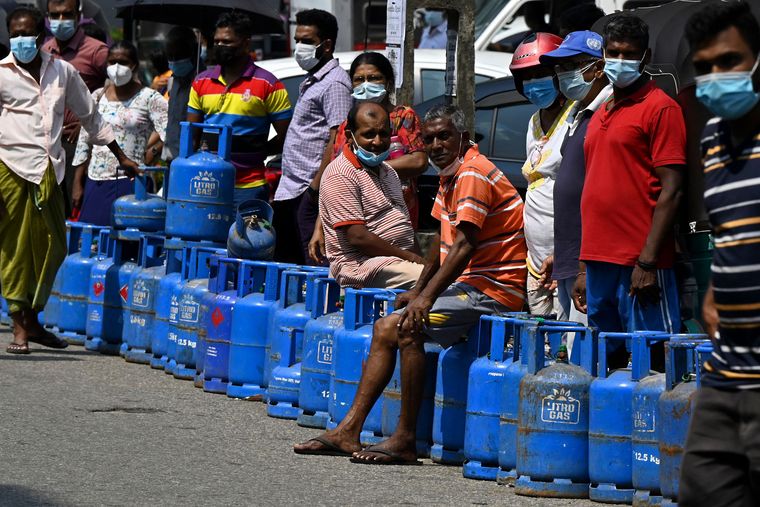 Paddy cultivation went down drastically in the Northern and Eastern Provinces. Tea cultivation, which is one of the mainstays of the economy, was also badly hit. The output of pepper, cinnamon and vegetables went down by 30 per cent. “Organic agriculture, being low-yielding, is land intensive. The crops may be resilient, but they cannot feed a growing population when cultivable land is shrinking,” said Dharmakeerthi.

When the government realised its folly and lifted the ban, the agriculture industry had lost nearly 50 per cent of its production capacity. So, the government had to rely even more on foreign countries for rice and other staples. Sri Lanka signed an agreement last year with Myanmar for importing one lakh tonnes of white rice and 50,000 tonnes of parboiled rice. It is also importing rice from India. China, meanwhile, donated a million tonnes of rice in January.

Gotabaya’s decision to cut down taxes, too, has severely dented Sri Lanka’s economic prospects. The move caused revenues to fall to a historical low of 9 per cent of the GDP. “The fall is one of the major reasons why the government is not being able to provide relief to the people during this devastating crisis. It is difficult to burden the public with indirect taxes, and for that matter even direct income tax, at a time the economy is shrinking,” said Kadirgamar. 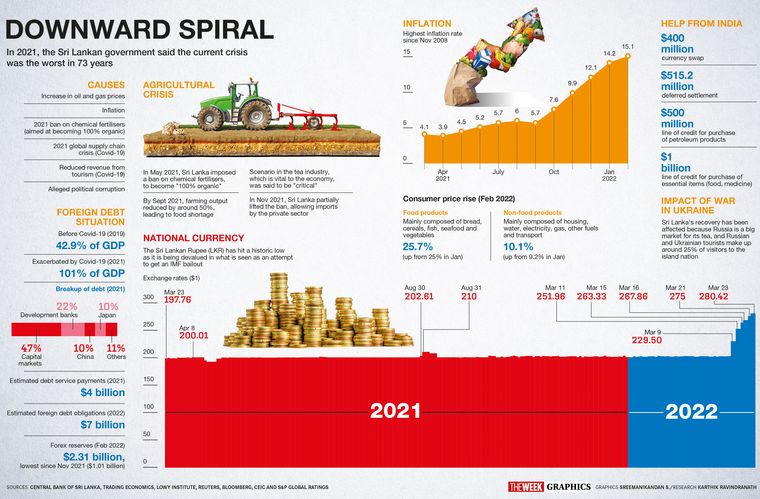 The tax cuts reduced the number of registered taxpayers in the country by 35 per cent, leading to credit rating downgrades. “With this, the cost of living has gone up,” he said. “Gotabaya’s tax relief package derailed our financial situation, leading to debt repayment at a huge social cost,” said Patali Champika Ranawaka, member of parliament and leader of the new political movement, 43 Brigade.

The inflation climbed to 15.1 per cent in February, up from the 13-year-high of 14.2 per cent in December. The government, meanwhile, was forced to withdraw the special Goods and Services Tax (GST), which was aimed at simplifying the existing tax structure after the supreme court ordered it to conduct a referendum and get the law passed by the parliament with a two-thirds majority.

Sri Lanka is also devastated by the collapse of its tourism industry, which contributes nearly 10 per cent of the GDP and is a significant source of foreign exchange. The pandemic caused tourism revenues to fall from $7.5 billion in 2019 to $2.8 billion last year. Just as the sector was limping back to normalcy, the Russia-Ukraine war has come as a major setback. A significant portion of foreign tourists who visit Sri Lanka are from Russia, Ukraine and Belarus.

The war in Ukraine poses other challenges as well. Sri Lanka imports 45 per cent of its wheat, more than half of its soybeans, sunflower oil, peas and asbestos from Russia and Ukraine. “The war has resulted in a steep increase of international oil prices. Also, both Russia and Ukraine are major importers of Sri Lankan tea,” said Colonel R. Hariharan, a retired military intelligence specialist.

“The foreign exchange crisis has become an existential threat. An even bigger problem is the borrowing. We have borrowed to invest unproductively, like the Hambantota port and the Ceylon Electricity Company,” said Amirthalingam.

The Gotabaya government, meanwhile, remains clueless about how to resolve the crisis. It could not agree on a roadmap to recovery even after two cabinet meetings on the subject. Sri Lanka has now approached India and China for help. During the visit of Finance Minister Basil Rajapaksa to Delhi on March 17, India offered a billion dollar line of credit to import food, other essential commodities and medicines. A few days later, China indicated that it was considering a billion dollar loan and a credit line worth $1.5 billion.

Colombo has also approached the IMF for help. Yet, there are not too many optimists in the island nation right now. Kadirgamar said Sri Lanka was unlikely to come out of the crisis immediately. “The country needs new policies. In the 1970s, we had a strong public distribution system like in India. We also had the cooperative network and the paddy marketing board. There is an urgent need to revive those institutions.”

Vimanga said borrowing more money without addressing the basic issues would only make matters worse. “Implementing economic reforms is the only way out,” he said. “The type of reforms needed will be very tough and painful, and it is difficult to see how acceptable that will be to politicians. With some stabilisation, Sri Lanka could perhaps get back to where the country was in 2019. Debt restructuring may take 18 to 20 months, while a return to growth will take even more time.”