By March, COVID will be endemic: Dr D.N. Reddy, Asian Institute of Gastroenterology 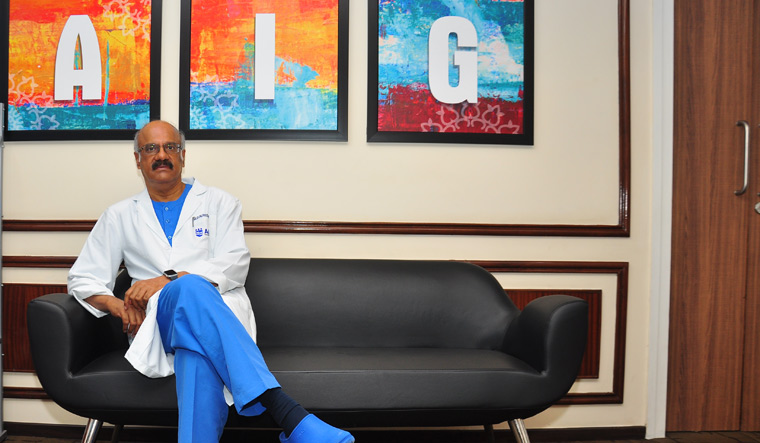 SINCE THE ONSET of the pandemic, reputed gastroenterologist and chairman of Hyderabad-based Asian Institute of Gastroenterology (AIG) Dr D. Nageshwar Reddy and the team have been at the forefront of trying to achieve breakthroughs in the treatment, diagnosis and prevention of Covid-19. In an exclusive interview, he talks about the third wave, the Omicron variant and his latest study. Excerpts:

Q/ At what stage of the pandemic are we in?

If we talk in terms of deaths and hospitalisations, we can still say that we have not progressed to that stage [where it can be called a wave]. But for epidemiological reasons, and government statistics, we can call it the third wave.

Q/ How do you distinguish between Omicron and Delta variants?

A/ Delta was less infectious. Omicron is three times more infectious, but the intensity of the disease is much less and the number of hospitalisations and ICU deaths are very low. The transmissibility is three times more, but the risk of an infection, especially affecting the lower lungs, is ten times lower.

Omicron’s symptoms are different from previous variants. It affects only the upper respiratory tract. So, most of the patients have fever, headache, body pains, and some have a running nose. It subsides within 48 hours. Deep cough and chest pneumonia are not there. Headache is a very predominant symptom. But patients do not develop coagulation abnormalities. With the Delta variant, people had clogging of the blood vessels in the lungs, heart and brain, which led to complications. Loss of smell and taste are not seen with Omicron.

Q/ Can you talk about your study which concluded that two different vaccine shots are more effective than vaccination from a single vaccine?

A/ Studies were done in Europe where they mixed Pfizer vaccines along with AstraZeneca and they found that these vaccines have a much better response. So, based on this hypothesis, we also looked at it. Covaxin is an inactivated, killed virus. So, this virus contains proteins against the nucleocapsid, which is the total protein of the virus. And there are many proteins.

We found that if we combined both, the antibodies that are generated is higher than with a single vaccine. So, the question is whether giving two different vaccines will protect against infections like Omicron. Right now, there is no data, but most likely it will.

Q/ The ICMR recommends repeating the vaccine taken earlier and not going for a different one, despite your study.

A/ The ICMR is right. Logistically, if you have to give the other vaccine then it is a problem, because 80 per cent of the country has taken Covishield. Now, if that 80 per cent has to take Covaxin it is not possible because production is not there. We also require a larger study, as our study was just a pilot one. They require very substantial scientific evidence. Unfortunately, for some reason, other centres have not done so and our study is the only one. So, they cannot make a decision based on one study.

Q/ One of the incidental findings during your study was that 87 per cent of the volunteers who did not take vaccines or were diagnosed with Covid-19 had antibodies. If we apply it to the entire country, a significant population might be having antibodies. So, why are we still seeing such a high number of cases?

A/ The high number of cases, despite this, is because antibody levels may not be high enough for protection. Omicron is an escape variant and it is escaping the antibodies. This variant is mild, and, fortunately, it is also inducing its antibodies. So, ultimately, the way it is infecting people, 100 per cent of the population will have antibodies in about four weeks. The whole population will be protected.

Q/ How problematic and widespread is long Covid?

A/ With Delta, long Covid was there in 30 per cent of patients as it was affecting the blood vessels producing a lot of auto-antibodies and we were seeing joint pains, cardiac problems, neurological problems and pulmonary problems. But with Omicron, long Covid may not be a major problem, although it is too early to say this. Omicron is like a natural vaccine, but we should not take it lightly and be careful. At AIG, we have a separate OPD setup for long Covid, where patients are treated separately. We are doing a lot of research on why patients developed long Covid to study how they should be treated.

Q/ When will the pandemic turn endemic?

A/ By the end of January, the peak will start coming down. By March I think the pandemic will become endemic. Only in small pockets, people will have a cough and cold. In the latter half of 2022, we will be free from it. That is my prediction.

The unpredictability is that if somewhere in between this virus develops another mutation, which causes not only increased transmissibility but also a more serious infection, then we are in trouble.