Pandemic might give way to an era of deglobalisation, says Shashi Tharoor 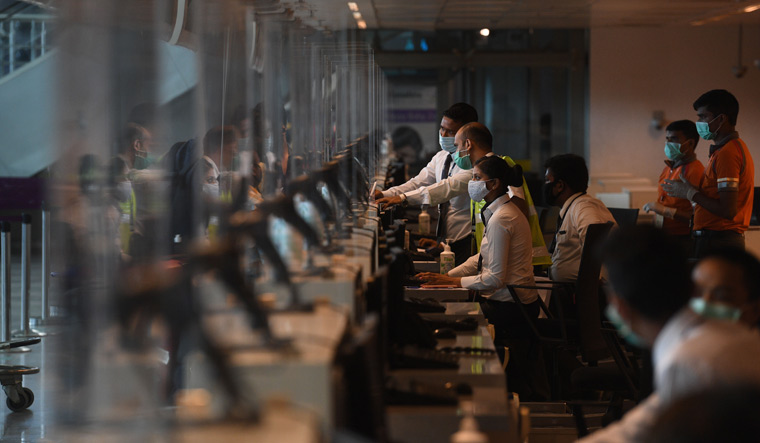 A post-Covid world? The thought seems to belong in the realm of fantasy. Most of us can barely recall life before Covid, let alone contemplate an existence without it. As the country braces for a “third wave” and vaccine manufacturers talk about the need for “booster shots”, can we truly contemplate a post-Covid world?

Yet though it is too early to assert anything with certitude, I will stick my neck out and say that it seems increasingly likely that Covid-19 will inaugurate an era of deglobalisation. The signs are mounting that the world may embrace isolationism and protectionism in a far more enthusiastic way than prior to the outbreak, including in India.

The indications are evident. The pandemic has confirmed, for many, that in times of crisis, people rely on their governments to shield them; that global supply chains are vulnerable to disruption and are therefore unsustainable; and that dependence on foreign countries for essential goods (such as pharmaceuticals, or even the ingredients that go into making them) could be fatal. Nations tried aggressively to acquire medicines and supplies for their own people at the expense of each other. There is a rush to reset global supply chains and raise trade barriers: the demand for more protectionism and “self-reliance” (echoed in Prime Minister Modi’s call for “atmanirbharta”), for bringing manufacturing and production value chains back home or at least closer to home, is mounting.

Along with these developments, there are collateral threats to the global flow of capital and investments, as well as multi-border pipelines and energy grids. The pandemic and the resultant lockdowns have already ended regular international travel across free and open borders; restrictions and quarantine requirements abound, some vaccines are not recognised by some countries, and travelling in masks and shields has taken much of the pleasure away from the jet-set lifestyle.

Much of what we took for granted till recently—and which seemed to be knitting the world ever-closer together—seems vulnerable in the post-Covid era. It is difficult to imagine that international travel will ever be the same again; that we will be able to move around without masks or taking recourse to sanitisers; that student life, with easy mingling on crowded campuses, will simply resume. Already, new patterns of work, involving following strict social distancing norms (and often with working from home at least a few days a week) has become the new normal. Many companies—most famously Twitter— have decreed that their employees may work from home indefinitely. Teeming office buildings and crowded workspaces may soon be a thing of the past. Fear of a virus, a deadly unseen enemy, may mark our lives for a long time to come, even after this particular pandemic ends.

The world economy had thrived since globalisation began in 1980 on an open system of free trade. That had already been shaken by the financial crash of 2008-09 and the American trade war with China. With the coronavirus, exports are falling everywhere, and world goods trade is shrinking. While China is seen as the big victor of Covid, a backlash has begun: Japan, for instance, has set aside $2.25 billion in incentives for Japanese companies who pull out of that country. But this has other implications: without inexpensive Chinese labour and subsidised inputs, the era of cheap globalised goods may be over for global consumers.

Covid-19 has also convinced many that foreigners are to be feared, that strict border and immigration controls are essential, that countries cannot always expect useful help from their neighbours and allies, and that national interests should trump international cooperation. Instead, the emphasis is on sovereignty, nationalism and self-protection. The increasing rejection of dependence on foreign goods is mirrored in a rejection of foreign “interference” as well. The UN has every reason to worry about its continuing salience. Those of us who had begun to imagine the globe as “One World” will have to revise our thinking. 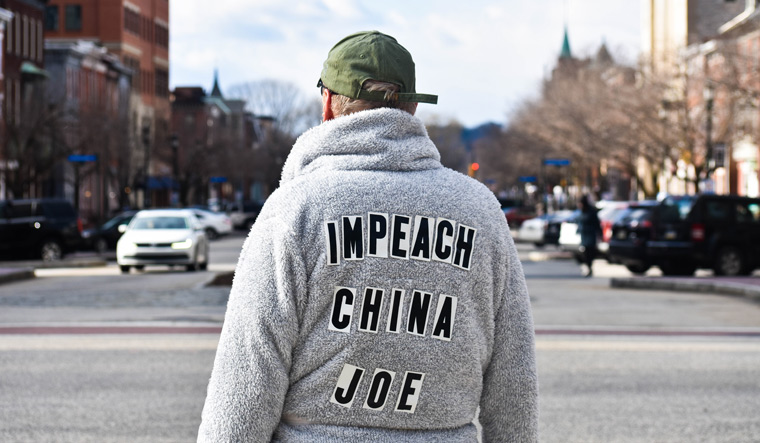 Power Struggle: The era of deglobalisation is likely to be marked by a new tension between US and China

There is no doubt that the Covid-19 pandemic was a “mega-shock” to the global system that is likely to disrupt the existing world order. As sovereignties are reasserted across the world, and treaties and trade agreements increasingly questioned, multilateralism could be the next casualty. US president Donald Trump’s announcement of the withdrawal of the US from the WHO was an ominous threat to multilateralism as the solution of choice to many of the world’s problems. Though it was reversed by his successor, President Joe Biden, it rang a warning bell for a greater unravelling—of the international system so painstakingly constructed after World War II. Instead of strengthening the capacity of our global institutions to cope with a future crisis, the world’s reaction to the virus may well end up destroying the most fundamental feature it has exposed—the idea of our common humanity.

This same set of trends has another corollary in domestic politics. For many countries, including ours, the answer to the dilemmas and disruptions thrown up by the pandemic lies in strong government, in putting the nation’s needs over individual citizens’ freedoms, and in dispensing with democratic niceties, from federalism to parliamentary oversight, in what the government deems to be the national interest. Support for nationalist strongmen (many of whom have used the present crisis to shore up their authority and power) may increase exponentially. The pandemic is already being used by many governments to justify extending their control over parliaments, courts, financial institutions, police and media. The surveillance state will grow, justified by the need to trace victims of the virus and their contacts; in India this is highlighted by the Pegasus scandal.

Within countries, conformity and xenophobia are on the rise. Already this pandemic period seems to have ushered in an increased fear of the ‘other’, as unfounded rumours and accusations against people blamed on the basis of their national, religious, ethnic or regional identity have had a field day in many countries. In India, citizens from our northeastern states initially suffered racial discrimination because of their supposedly “Chinese” features. Social media and nativist populism have amplified prejudices; the fact that a puritan Muslim sect, the Tablighi Jamaat, had held a major gathering just before the lockdown—whose attendees spread the infection to many states when they returned home—was used to justify open bigotry and discrimination against Muslims. The atmosphere created by the virus has empowered those who seek to spread another contagion—that of communal hatred and bigotry.

The phenomenon which, at a global level, we may characterise as “deglobalisation” has its regional implications too. Europe, once seen as a “poster child” for the virtues of regional integration, is now the epitome of its limitations, since the “idea of Europe” crumbled quickly under the onslaught of the pandemic. European solidarity has been an early victim. The famous Schengen visa and the notion of border-free movement was the first casualty of the pandemic. The EU countries threw up the barriers at the first sign of the virus: it did not take them long to rediscover the disadvantages and limits of the very free movement of goods, services, capital and people that they had sworn by for five decades. Italy, the first major centre of the Covid-19 crisis, was denied medical equipment by its EU neighbours, who introduced export controls instead of extending solidarity to their fellow Europeans in distress.

The worst lesson for Europe came when nine pandemic-hit governments in the euro zone—led by Italy, Spain and France—proposed the joint issuance of “corona bonds”, combining securities from different European countries (which would therefore mean they would not sit on any one country’s balance sheet), to raise money to distribute among eurozone members according to the severity of their affliction by the pandemic. These “corona bonds” would have been an instrument of unity at a time of shared crisis, but Germany, the Netherlands, Austria and Finland—the “frugal four”—rejected the idea, opposing the obligation to risk their money to bail out weaker and less well-prepared countries. French President Emmanuel Macron decried what he called “the illness of every man for himself,” but the “corona bonds” were never issued. The result, he warned, will be a “selfish and divided Europe.” The credibility of the EU will take a long time to recover.

Geopolitically, the era of globalisation coincided, for the most part, with what was dubbed “the unipolar moment”, a brief period of a couple of decades of dominance—politically, militarily, economically, and technologically—of the world by the US. The era of deglobalisation is likely to be marked by a new bipolar tension between the US and its principal competitor for the label of “superpower”, China. No longer will the US be uncontested in any of these domains. China’s “peaceful rise” for the last quarter of a century, fuelled by American investment in its industries and burgeoning export trade for its manufactures, has culminated in supplanting the US as a manufacturing and industrial power, rivalling it in economic size and exceeding its surpluses, as well as challenging it in new cutting-edge technologies like 5G. The worry is that a “risen” China sees no need to remain peaceful: its belligerence with India on the disputed frontier, its assertiveness with its maritime neighbours like Japan and Vietnam, its tough new security clampdown in Hong Kong and its trade sanctions on Australia all speak of a newfound willingness to pursue its goals aggressively.

The pandemic has caused all these trends to become apparent, shaking the foundations of the old world order. The post-Covid world, whenever that comes into being, is likely to bear the imprint of this disaster in changes that may yet turn out to be even more far-reaching than we can anticipate today. It is a cliché worth repeating: We may need to start dating our times as “BC” (Before Covid) and “AD” (After Disaster).

—Tharoor is an author and Lok Sabha member.