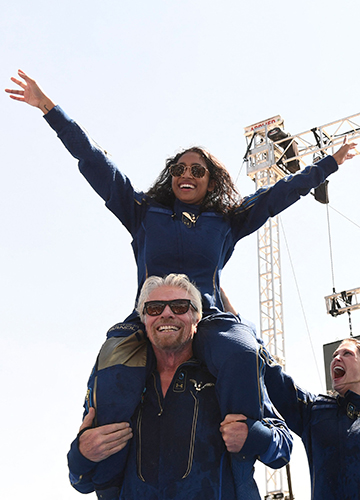 Moment of triumph: Richard Branson with Sirisha after their space voyage | AFP

Hours after landing back on earth after a historic journey in space, Sirisha Bandla spoke to her aunt, Manjulatha Kanneganti, about the “life-changing experience”. Manjulatha asked Sirisha if she would do it again. Pat came the reply: “I cannot wait to go again.”

Sirisha, 34, who was part of the six-member crew of Virgin Galactic’s Unity-22 test flight on July 11, was always focused on space science, say her family members.

Born in Prakasam district of Andhra Pradesh, Sirisha migrated to the US with her parents when she was four years old. “Sirisha always wanted to be an astronaut and she never forgot that dream. As a young child, she visited NASA on a school field trip. The thought of going to space and being an astronaut persisted ever since. She started looking around and planned the routes that could lead her to fulfil her dream,” says the Texas-based Manjulatha. As a teenager, Sirisha got a licence to fly single-engine aircraft and was also a ‘G gravity’ intern at NASA. When an eyesight issue prevented her from joining NASA, Sirisha took a different route, leading to her becoming Virgin Galactic’s vice president for government affairs and research operations. Her role aboard the flight was to evaluate researcher experience.

Back in India, Sirisha’s grandparents have always known her to be “courageous, adventurous and focused”. But her paternal grandfather, retired research scientist Bandla Ragaiah, and maternal grandfather, retired chemistry lecturer Venkat Narsaiah, experienced some tense moments on the evening of July 11. Bandla lives in Guntur, Andhra Pradesh. That evening, he made an unusual request to the gods—for a safe flight for his granddaughter. “It is a thrilling experience. She is world-famous now,” says Bandla, who is flooded with congratulatory calls from friends and relatives.

In nearby Tenali town lives Sirisha’s maternal grandfather, Venkaiah. It was a media circus in his house as channel crews set up cameras and recorded the live reaction during Sirisha’s flight. It was a special moment for Venkaiah as Sirisha spent most of her childhood with him before she moved to the US. He recalls an incident which took place when Sirisha was nine years old. “In 1997, Sirisha came from the US to attend a function at our place,” he says. “My wife and I were happy to see her. She said that she will become a pilot and fly me to the US.”

Venkaiah admits that imagining Sirisha in a spaceship gave him some “tension”, but it was all well after a call from his daughter. “She called and told me that the mission was successful,” he says. Sirisha’s parents, Murali and Anuradha Bandla, were at the launch site in New Mexico that day. Sirisha belongs to a family of science graduates. Her father, Murali, is a scientist employed with the US embassy in Delhi and her sister, B. Pratyusha, is a biological science technician in Maryland.

For her family, Sirisha is a down-to-earth person, but for the world watching the video recorded from inside the spaceship, Sirisha looked like she loved being far from earth.