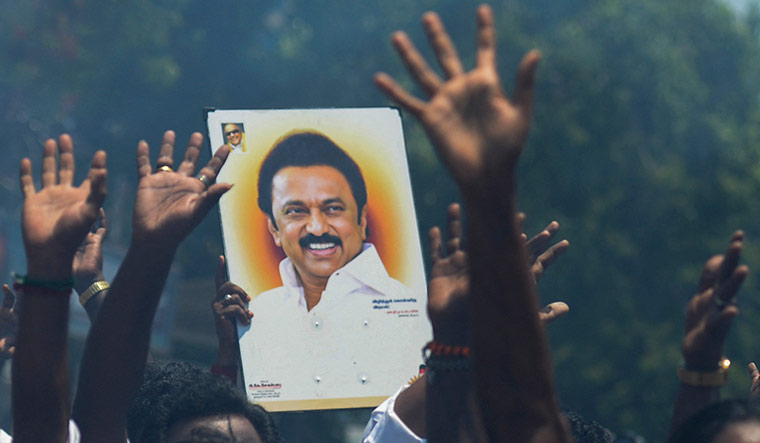 At long last: DMK workers with a placard of Stalin | AFP

As the trends began showing a convincing victory for the DMK on May 2, a senior IAS officer paid a quick visit to the Chittaranjan Salai residence of party supremo M.K. Stalin, with a bouquet of roses and a handful of files. The senior bureaucrat, who had worked with Stalin when he was the mayor of Chennai, was the first high-profile visitor to personally greet the incoming chief minister. The roses were to congratulate him, while the files were to brief him on the surging Covid-19 cases and the threat posed by the pandemic.

This is for the first time in 50 years that someone other than M. Karunanidhi is taking over as chief minister of Tamil Nadu representing the DMK, and it is a major challenge for the party and its leadership. The previous DMK regime, which was in power from 2006 to 2011, had earned the wrath of the people for its alleged abuse of power. As the 68-year-old Stalin gets ready to take over as chief minister, the question doing the rounds on social media and in the minds of the people is, “Has the DMK changed?”

A change in the DMK has different connotations for different people. For party veterans, it is now clear that the centre of power has shifted from the Karunanidhi residence at Gopalapuram to the swanky Chittaranjan Salai. The well-wishers of the party are keen to see whether Stalin will be inclusive like his father. For the DMK’s alliance partners, the question is whether Stalin will run the show for the next five years taking them into confidence, or will it be a one-man show. For the DMK’s political rivals, the worry is whether Stalin will proceed legally against them for their alleged misdeeds. The educated and the enlightened supporters of the DMK want to see how Stalin is going to deal with the Centre and safeguard the rights of the state. Finally, the public wants to know whether the DMK under Stalin will stay away from violence and abuse of power for which it is notorious for.

On the other hand, if there is one thing that people want Stalin and the DMK to keep unchanged, it is their efficiency in running the government. “During his tenure as mayor of Chennai or as the minister of local administration, Stalin was always courteous to the bureaucrats. He was never vindictive and gave them space to work. He was a good listener and was always supportive of the hard work for the welfare of the people,” said former bureaucrat Ashok Vardhan Shetty, who has worked with Stalin. In fact, Health Secretary J. Radhakrishan rushed to Stalin’s residence to congratulate him and brief him on the pandemic, probably keeping this in mind. On May 4, Stalin held a meeting with Chief Secretary Rajiv Ranjan, Director General of Police J.K. Tripathy, Radhakrishnan and other senior officials and called for proper implementation of the new lockdown regulations. In a press release, he suggested the deputation of IAS officers to the districts to ensure quality treatment to victims of Covid-19.

While Tamil Nadu looks forward to active and vigorous leadership from Stalin, political observers feel that he should be careful about parallel power centres developing within the family. “He is definitely not like his father. The way he consolidated the party behind him over the years, even when the DMK was out of power, makes this obvious. He will be an inclusive person, but not someone who will allow others in the family to wield power,” said political observer and academic P. Ramajayam.

Stalin takes over at a time when Tamil Nadu is facing a fierce battle between secular forces and hindutva elements. “He has raised expectations by keeping the secular alliance intact,” said Thol. Thirumavalavan, who heads the Viduthalai Chiruthaigal Katchi (VCK), an alliance partner of the DMK. “Stalin explained how important it is for the DMK to come to power in Tamil Nadu when hindutva forces are craving for an entry.”

For Stalin, however, the job will not be easy. He will have to work hard just like he did to rise to the top of the DMK. A raging pandemic that is unlikely to subside anytime soon, a debt-strapped treasury and a less-than-friendly government in Delhi will add to the challenges. But Stalin seems to be ready. “He has experience at different levels of administration as mayor, minister and deputy chief minister. But he has to deal with a Central government which does not [respect the] federal structure and is known for destabilising state governments,” said Justice Chandru, a retired judge of the Madras High Court.

The state is also in a financial mess. The debt has grown from Rs1.30 lakh crore in 2011 when the DMK left office, to Rs4.85 lakh crore. “The DMK has always attacked the AIADMK for its bad finances and reckless spending. Now under Stalin, the new government will have to find ways to increase the state’s revenues and reduce spending,” said R. Srinivasan, head of the department of econometrics at Madras University.

Stalin will also have to deal with a strong opposition. The National Democratic Alliance has 75 members in the new assembly, with 66 from the AIADMK, four from the BJP and five from the PMK. Despite the intense faction feud between former chief ministers O. Panneerselvam and Edappadi K. Palaniswami, and the challenge posed by the reentry bid of former general secretary V.K. Sasikala, the AIADMK managed to put up a gutsy performance in the elections. The party polled 33 per cent votes, just three per cent less than that of the DMK. With a spirited opposition, a combative Central government, a raging pandemic and a challenging fiscal situation posing major challenges, Stalin has his task cut out in his first term as chief minister. 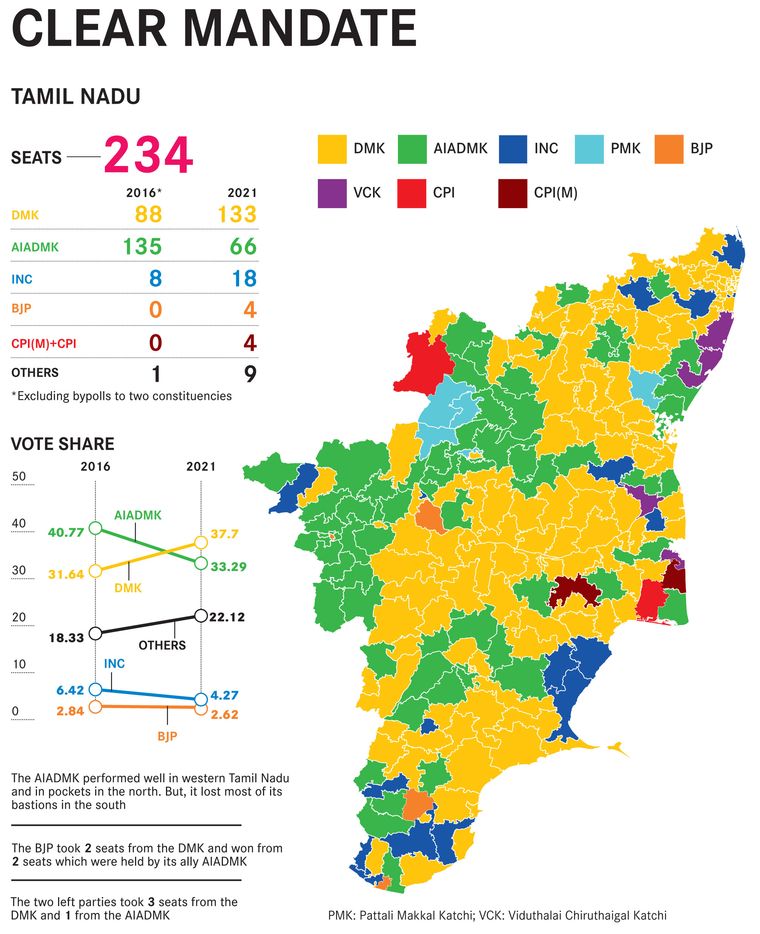