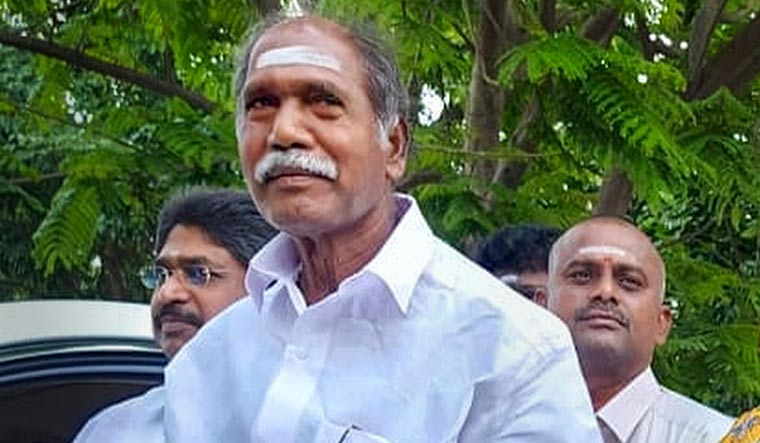 On May 2, as the DMK and the Congress were celebrating in Tamil Nadu, the mood was sombre for their cadre in nearby Puducherry. The Congress lost to the BJP, which captured power in alliance with the All India N.R. Congress (AINRC) led by former chief minister N. Rangasamy.

Although the BJP is the junior partner, there were rumours that it was reluctant to give up the chief minister’s chair. Some reports indicated that if denied the top post, the party would not join the government, but would only extend outside support to Rangasamy.

The BJP, which did not have a base in the Union territory till February, managed to engineer defections from the Congress. Former Congress legislators A. Namassivayam and A. Johnkumar won on BJP tickets. Johnkumar's son, Richards, won from Nellithope. Rangasamy, who contested from two constituencies, won from Thattanchavady, but lost Yanam to an independent candidate.

It may not be easy for Rangasamy, however, to lead a coalition with Namassivayam and others who were once his colleagues in the Congress. Namassivayam, who is Rangasamy’s relative, also has chief ministerial ambitions. In fact, it was why he ditched the Congress and joined the BJP.

Though the BJP has finally agreed to be a part of the government, sources said the national party would begin its political power play sooner or later. The BJP high command is said to have plans to bring in a new face to take over the government.

“Rangasamy has to depend on the BJP to run the government. Apart from the six BJP MLAs, there will be three nominated legislators who could be BJP sympathisers or party members themselves, as in 2016. It is to be seen if Rangasamy will have a free hand,” said an AINRC MLA.

The BJP, which has been fighting hard to make inroads into south India beyond Karnataka, hopes that Puducherry could provide it an opening. “This is because Puducherry is spread across three southern states—Tamil Nadu, Kerala and Andhra Pradesh. So the BJP feels it can influence voters in the three states by its performance in Puducherry. But Puducherry's political atmosphere is different,” said political observer and academic P. Ramajayam.

Sources said Namassivayam and Johnkumar would demand important portfolios and Rangasamy would have to oblige. With Soundararajan, who was Tamil Nadu BJP president till 2019 in the Raj Nivas, the national party expects a smooth run. “The disturbance to Rangasamy may not come immediately,” said Ramajayam. “But he will always be walking on a knife-edge.”