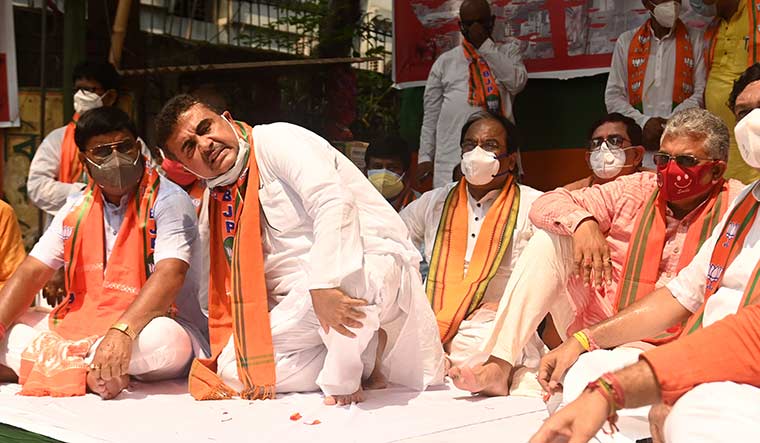 Having helmed India's cricketing ship through the choppy waters of the early noughties, Sourav Ganguly knows how to make wise decisions. So, when an offer to join the BJP was put forth, he looked before he leapt. “His intuition was right,” said a senior Trinamool Congress leader as counting was on on May 2. “He took the right decision as the result is now showing.”

Central BJP leaders, based on internal surveys in the state, had said that the party would cross 200 seats. Such was the bluster that several Trinamool leaders left Mamata Banerjee to join the BJP.

But for those who travelled statewide to gather the on-ground sentiment, it was clear that the villagers of Bengal were holding their cards close to their chests. Usually, such silence would indicate that they would vote against the party in power. Unfortunately for the BJP, this was not true.

But how did a party that led in 121 assembly segments in the 2019 Lok Sabha elections drop to 77 seats this time? While many reasons have been floated, the most prominent was the BJP's over-reliance on Trinamool defectors. Following the impressive performance in 2019, the BJP's central leaders had pumped in a lot of resources into the state ahead of the 2021 assembly elections. However, they seemed to lack confidence in the people who got them success in 2019. The party reached out to ministers and leaders of the Trinamool, many of whom obliged. It seemed as though the BJP was in a hurry to unseat Mamata, and would not mind accommodating most of the turncoats.

There was expected backlash from party workers. They did not want “politically irrelevant” people to get tickets in crucial seats. They wanted local leaders to be fielded, as they could cash in on any anti-incumbency. The party's central election committee, however, refused. Except Mihir Goswami in Cooch Behar’s Natabari and Suvendu Adhikari in East Midnapore’s Nandigram, no other recent Trinamool defector won.

BJP sources said that local leaders refused to work for the turncoat candidates; just a few years ago, they had fought these people in violent panchayat elections.

From the time he jumped ship in December, the BJP had depended a lot on Adhikari. He played a key role in deciding several candidates, and infused the campaign with a communal flavour. It backfired. Adhikari’s communal jibe at Mamata, calling her “begum”, hit a raw nerve in rural Bengal.

Administratively, the BJP made the mistake of not naming an election in-charge in Bengal. In 2019, former Mamata confidant Mukul Roy had this role. And, along with state BJP president Dilip Ghosh, he selected the candidates and led the party to an impressive result.

This time, though, Roy was overlooked. Worse, he was asked to contest an election after 20 years, from Krishnanagar (Uttar). Quite surprisingly, he kept away from major organisational matters and concentrated on his own campaign. He won.

Many in the BJP could not understand Roy's apparent isolation. Some of them tried to link his absence from the party’s war room in Kolkata to a remark Mamata made at a public rally in Nandigram. “Mukul is not as bad as the traitor (Suvendu) here,” she had said.

Another mistake was the central leadership's keenness to run the entire campaign in Prime Minister Narendra Modi's name. The 20-plus rallies of Modi and Home Minister Amit Shah had minimum effect. “The party leadership was dwelling on the chief ministerial candidature of E. Sreedharan in Kerala, where we had no chance, but refused to name Dilip da as the prospective chief minister in Bengal,” said a senior BJP leader overseeing a zone in Bengal. “The importance that Adhikari received created doubt among the workers of the BJP and the sangh parivar. They would never accept the leadership of defectors except Roy, who made himself acceptable to us.”

Ghosh's first day as a major opposition leader was tough. Within 24 hours of the election results, nine BJP workers were reportedly killed across the state. Hundreds of others, and their houses, have reportedly been attacked. “We have rushed to the governor for help,” said Ghosh. “If the violence does not end, we would have to hit the streets during this pandemic.”