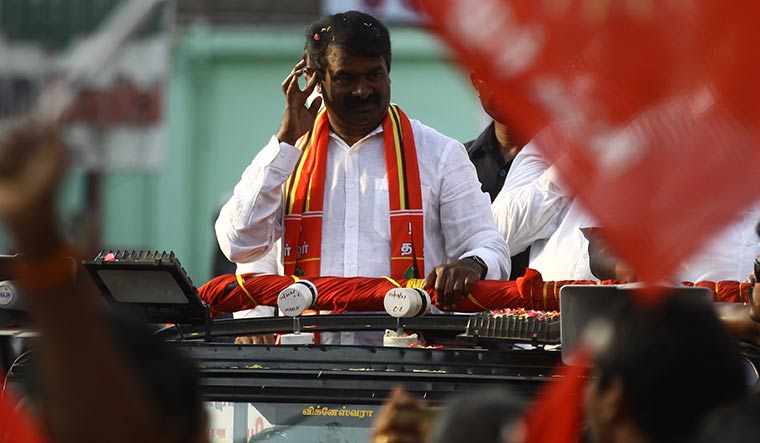 Actor-director Senthamizhan Seeman, who used to be a fiery supporter of the Liberation Tigers of Tamil Eelam (LTTE), has been pitching himself as an alternative to the two Dravidian majors, the DMK and the AIADMK, for quite some time now. During the last stages of the Sri Lankan war, Seeman had floated a small outfit called Naam Tamilar Iyakkam, which, over the years, has come to be known as Naam Tamilar Katchi (NTK). His pro-Tiger rhetoric has metamorphosed into the politics of Tamil nationalism. On May 2, when assembly election results were announced in Tamil Nadu, Seeman showed that his party has come a long way, long enough to hurt the prospects of the DMK and the AIADMK in several constituencies across the state.

Seeman, 46, has a group of committed followers, who are known as ‘Thambis’, like comrades in the communist parties. A staunch supporter of the slain LTTE leader Velupillai Prabhakaran, Seeman had directed a movie titled Thambi, which was Prabhakaran’s pet name. His Thambis, who are mostly Tamil youth, are always ready to hit the streets for any cause or against any target chosen by him.

Seeman’s electoral impact has not been so significant, till now. But these elections were different as the NTK caused widespread damage to both the DMK and the AIADMK in at least 200 of the 234 constituencies in Tamil Nadu. The DMK was hit in western Tamil Nadu—from Dharmapuri to Coimbatore—and also in the southern and central pockets of the state. In rural areas, the NTK secured a sizable number of votes in Thiruvaiyaru, Kallakurichi, Tiruvadanai, Kunnam and Jayankondam, spoiling the prospects of the AIADMK. Seeman contested from Tiruvottiyur in Chennai, finishing third behind the AIADMK and the DMK, polling more than 48,000 votes. The NTK put up a strong show also in urban areas like Thiruverumbur, Tiruchirappalli East, Tambaram, Sriperumbudur, Alandur and Avadi. Of the 60 constituencies in the southern districts from Tiruchirappalli to Tirunelveli, it finished third in 42 constituencies. In the remaining 18 constituencies, it was fourth behind T.T.V. Dhinakaran’s AMMK.

The NTK, which used to poll just around 500 votes in most constituencies when it started contesting elections, has significantly improved its vote share this time. The party has polled at least 8,000 votes each in most of the constituencies in northern and western Tamil Nadu, denting the prospects of the DMK. “Seeman’s pro-Tamil-culture stance has gained traction. He is here to stay,” said political analyst Raveendran Thuraisamy. His fiery speeches have become popular among the people in rural pockets, with the penetration of the internet and availability of social media.

While Kamal Haasan’s Makkal Needhi Maiam spoiled the AIADMK’s prospects in the urban constituencies, the NTK hurt the DMK in the semi-urban constituencies. “With this, NTK has metamorphosed into a mainstream party in Tamil Nadu politics,” said Thuraisamy. “It is no longer just a movement with extremist leanings.”