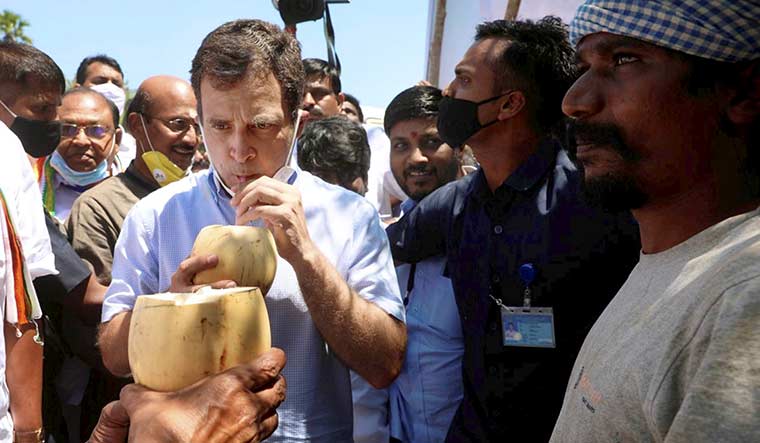 Taking a break: Rahul Gandhi on the campaign trail in Tamil Nadu | PTI

The latest round of assembly polls have brought the Congress no reason to cheer. The assessment that the party is in an uncontrolled downward spiral, staring at an existential crisis and fast losing national relevance, has gained further strength.

As West Bengal Chief Minister Mamata Banerjee single-handedly fought and retained the state, several Congress leaders congratulated her, apparently taking solace in the BJP failing in its mighty gambit. The flip side of the poll outcome in West Bengal, however, was that the Congress failed to win even a single seat, and its vote share plummeted to three per cent.

The Congress failed to wrest back Assam from the BJP and lost Puducherry. The biggest setback for it was in Kerala, where the circumstances favoured the Congress—given the revolving door nature of elections in the state, and where it had made a near clean sweep in the Lok Sabha polls in 2019—and yet it failed. The only bright spot was Tamil Nadu, where the party won 18 of the 25 seats it contested, but it benefited from the pro-DMK sentiment in the state.

Of the 14 assembly polls that have taken place since the 2019 Lok Sabha elections, the Congress has managed to form governments in only three states—Maharashtra, Jharkhand and Tamil Nadu. But it is a junior partner in these three states. On its own, it is in power only in Rajasthan, Punjab and Chhattisgarh.

Internal turmoil in the party is expected to intensify, the latest poll results yet again bringing into question the leadership of the Gandhis. The elections were seen as a litmus test for Rahul as it came against the backdrop of questions raised by the group of 23 leaders about the sense of drift in the party, the leadership issue and their demand for an overhaul. The G23's concerns were seen as displaying an unease with Rahul's style of functioning.

It was felt that the best bet for the Congress was in Kerala, and it was high priority for him also because he is an MP from the state. The Kerala debacle reflects poorly on Rahul all the more because he was virtually the face of Congress' campaign in the state. Every aspect of the party's campaign bore his stamp. He had handpicked old warhorse Tariq Anwar as the general secretary in charge of the state. The general secretary in charge of organisation, K.C. Venugopal, a close aide of Rahul, was said to wield a lot of clout in the state. A team of senior observers led by Rajasthan Chief Minister Ashok Gehlot was deputed to iron out factional differences and supervise the campaign.

In Assam, while decision-making for the elections was decentralised—a rarity for the Congress—Rahul remained invested in the state. His long-time confidant Jitendra Singh is Congress general secretary in charge of the state, and he deputed his favourite chief minister, Bhupesh Baghel, to oversee the campaign. An alliance of opposition parties was put in place and the faction-ridden state unit came together to launch a fairly decent campaign hinged on identity politics, with an 'anti-CAA' theme.

While the Congress was up against the formidable image of Pinarayi Vijayan in Kerala, identity politics in Assam appears to have failed in the face of the BJP government's rollout of development schemes and the negation of anti-CAA campaign by Hindu-Muslim rhetoric. It is, however, felt that had the central leadership dealt with organisational and structural issues in the two states a little earlier, the party would have done better.

Congress leaders in charge of the party's poll management in Assam said they got a lot of things right in the state, but the alliance with the All India United Democratic Front (AIUDF), identified as a party of Bengali-speaking Muslims, turned out to be a double-edged sword. “The BJP harped on the Hindu-Muslim narrative. We suffered because of it in upper Assam and to a certain extent in middle Assam also,” said Congress leader Shakeel Ahmed Khan, one of the party's senior poll observers. “There are organisational issues in the Assam Congress, the worker strength is depleted, and there are differences among the leaders. Had we begun working on these issues six months before the elections and not three months, the result would have been different.”

In Kerala, according to senior leader Kodikunnil Suresh, while the image of Vijayan was a major factor, the party's support base among the minorities has eroded. “Minorities feel that the left front is better placed to stem the rise of the BJP. Within the organisation, loyalty is to faction leaders and not to the party.”

However, it will be premature to believe that this will be the end of the road for the Gandhis. Also, the effectiveness of the questions that Rahul has raised about the Narendra Modi government's handling of the Covid-19 pandemic has found favour even with his critics in the party.

The reaction to the latest electoral debacle may not be immediate, given the party's preoccupation with the pandemic-related issues. Externally, the Congress would have to deal with questions about its relevance at the national level. There is expected to be a challenge to the Congress's claims to lead the anti-BJP opposition bloc.

Randeep Surjewala, Congress general secretary in charge of the party's communications department, however, said it was only the Congress that had the national perspective required to hold the country together. “I bow before our regional leaders, their capability, potential and their victories,” said Surjewala. “But it is also true that one-size-fits-all does not work in this country.”