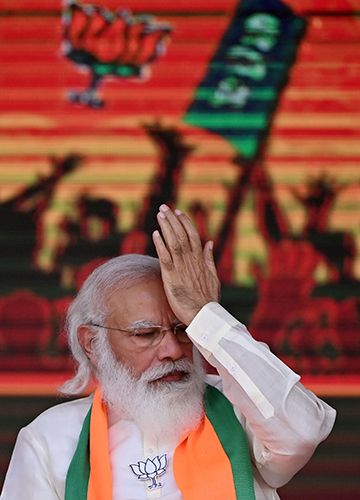 The terror attack that killed 40 men of the Central Reserve Police Force in Pulwama on February 14, 2019, was a turning point in the run-up to the Lok Sabha elections in the summer. The outrage it triggered not only threatened to derail the BJP's campaign, but also had the potential to dent Prime Minister Narendra Modi’s image of a strong leader. The reaction, however, was decisive. Indian fighter jets pounded terror camps in Balakot, inside Pakistani territory, on February 26. The crisis was turned into an opportunity. Political discourse was set by the issue of national security. Modi's image soared. The pain of demonetisation was forgotten. The BJP had a landslide victory.

Now, as the deathly strain of Covid-19 wreaks havoc across the country, despondency has again set in. While it is proving to be a challenge for both the Centre and the state governments, Modi has been steering the national response to the pandemic, and the expectations have been much higher from him.

The crisis came in the middle of fiercely fought elections and was exacerbated by mass political and religious gatherings. But, this time, there has been no surgical strike to tide over the crisis. It could have been resolved in one swift action; it needed a focused response. Political considerations evidently clouded the government’s assessment of the severity of the crisis. As it lost precious time for building health infrastructure, the ruling political class appeared at a loss on how to handle the crisis.

As Modi completes seven years in high office this month, his government is faced with two unprecedented challenges. The prime minister's governance model has been put to test over the handling of the second wave of Covid-19, while the political pressure on him is set to mount after the dismal show in the current round of assembly elections.

Mamata Banerjee's spectacular victory in Bengal against the formidable BJP election machinery has the potential to rejuvenate the opposition camp. She seems set to become the pivot of the anti-Modi grouping, a role she has been waiting for. Even before the elections, she had written to 15 opposition leaders to unite against the BJP. Along with her, the emergence of M.K. Stalin in Tamil Nadu and Pinarayi Vijayan in Kerala as strong anti-BJP regional politicians could occupy the opposition space that the Congress has been struggling to fill.

The assembly election results have thrown up several interesting insights. The electorate has made it clear that it makes a distinction between national and state elections. The BJP's strategy of using Modi as a mascot had limited success in the absence of a clear chief ministerial candidate. It has consistently been losing vote share since the 2019 Lok Sabha elections. In 2019, the BJP got a 40 per cent vote share and it led in 121 assembly seats in Bengal, while two years later, it could not go beyond 77 with a vote share of 37.7 per cent. A similar trend was seen in the assembly elections in Haryana, Jharkhand, Delhi and Bihar.

These elections also emphasised the fact that the BJP struggles against strong regional satraps. A chief ministerial face does help in winning elections. The parties that gave clear and strong chief ministerial candidates have found favour with the voters. It was Banerjee versus everyone in Bengal. The BJP did not declare a CM candidate owing to infighting, and no leader was capable enough to carry the campaign on his shoulders. This pitted Modi against Banerjee on her own turf. And the voters made it clear that they were looking for a local face. 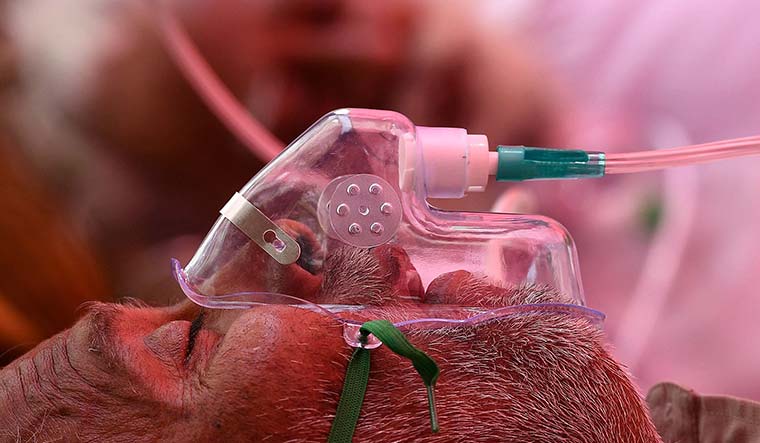 Wrong priorities: The government has been accused of trying to cover up shortage of oxygen and vaccines | AFP

In Assam, though the BJP did not declare a CM face, it had the incumbent CM, Sarbananda Sonowal, and the all-powerful Himanta Biswa Sarma. On the other side, the grand alliance did not project anyone as its candidate. In Tamil Nadu, Stalin was the clear face of the DMK-Congress alliance, and in Kerala, Vijayan was the CM face of the left alliance.

Another takeaway of these elections has been that chief ministers who focused on welfare schemes managed to create their own loyal vote bank. Silent women voters emerged as powerful force multipliers for Banerjee. A similar strategy had saved Nitish Kumar in Bihar last year despite anti-incumbency.

The results may have not been according to its expectations, but the BJP is putting up a brave front. “It is a victory for the Trinamool in Bengal, but it is a larger victory for the BJP,” said BJP leader Rajiv Pratap Rudy. “The state has been ruled by the left for over three decades, the Congress 25 years, and the Trinamool 10. Now we have a national party occupying the main oppositional space in the state. We have grown from three seats in 2016 to 77 this time.”

The next big challenge for the BJP and Modi will be in 2022 when states like Uttar Pradesh, Gujarat, Himachal Pradesh, Punjab and Manipur go to the polls. The Yogi Adityanath government in Uttar Pradesh has already had a scare when the panchayat election results were announced. The Samajwadi Party was ahead of the BJP in the overall tally. The panchayat elections in 2016 had laid the foundation for the BJP's organisation at the grassroots, which ensured a thumping victory for the party in the assembly elections in 2017.

There could be another fallout of these elections results. The Modi government had faced intense resistance to its citizenship laws. The loss in Bengal may prompt it to go slow on the Citizenship (Amendment) Act. Home Minister Amit Shah, the political face of the law, ran the BJP’s massive campaign in Bengal. In Assam, the party did not raise the issue.

Also, as elections are due in Uttar Pradesh and Punjab next year, the government may open a dialogue with the farmers who have been agitating on the Delhi borders for five months. The government’s hard stance may see some course correction.

BANERJEE HAS BEEN pushing for a joint front against the BJP. Her third victory may see her trying for that elusive grand alliance. But that is easier said than done. The last time all the challengers gathered was in 2018 when the Janata Dal (S)-Congress alliance government was sworn in in Karnataka. After that, the unity had fizzled away.

The BJP, however, is not much worried about such moves as they suit its narrative of Modi versus all. “No one can stop anyone from coming together to form a front. This very well establishes the decimation of the Congress as a national party. We have to accept that regional parties have their localised vote bank and philosophy, but the BJP has a nationalistic presence in 15 states. At this point in time, the nation would opt for a national party, and the choice will be the BJP,” said Rudy.

Political analyst Badri Narayan, too, said the efforts to create opposition unity were a difficult prospect. “Either the opposition will be Congress-centred or others will come together separately from the Congress. This will lead to a triangular contest. In such a scenario, the BJP stands to gain. However, if all come together on the same platform, then they can challenge the BJP,” he said.

Political strategist Prashant Kishor, whose election management helped Banerjee win, can come in handy in this opposition space. After the results came out, he made a dramatic announcement of leaving election management to pursue other goals. He has his own political ambitions. As he has helped Jagan Mohan Reddy, Arvind Kejriwal, Stalin, Banerjee, Nitish and Amarinder Singh win elections, he has direct access to them and has the potential to be the link for a grand opposition unity to arrive at a singular narrative against Modi.

Opposition unity, however, is the least of Modi’s worries now. His government and party are struggling to deal with the anger building across the country over mismanagement of the pandemic.

THE MODI-SHAH duo excels in electoral battles. But the prime minister, the finest communicator in the country, has often been at a loss for words since the second wave of Covid started. The usually active ministers and senior BJP leaders have been found wanting. The government's communication strategy has been weak and seen as an attempt to cover up the shortage of oxygen, medicines, vaccine and other critical supplies. And the Supreme Court and the High Courts had to don the mantle of the executive to resolve the crisis.

“People are pleading for oxygen. The same is the situation with the vaccine. The government has declared Central Vista as an essential service when thousands are dying every day, lakhs are suffering and struggling for hospital beds, oxygen, medicines, in the same capital city,” said Pawan Khera, spokesperson for the Congress.

The government can blame only itself for the situation. Former IAS officer Anil Swarup said the governance crisis was precipitated as the people who were supposed to respond were busy with elections. “My serious concern is that some people at the political level aggravated the crisis by not looking at it in a timely manner, and taking steps which could have prevented its growth. When the writing was on the wall, people were busy elsewhere. At the time when preparation should have been done, when the Covid spread could have been stopped, they were busy with election rallies. That was the time to prevent the Covid problem. The responsibility lay with the political leadership,” he said. But he added that the government was putting in a good effort now.

The government also had to face the embarrassment of the world watching the horror unfolding in India. The brutal international media coverage pinned the blame on the prime minister, denting his image as a global leader.

The BJP believes the crisis will be over soon, and then the healing may have to be carried out to assuage those who have been directly impacted by the pandemic, especially those who have lost family members.

Political scientists are witnessing a new narrative emerging out of the Covid crisis. “Politicians have to weave their messaging around the medical response, as to how they handle this crisis, and what they did to ameliorate the suffering of people,” said Narayan.

The new welfare state may be the one that takes care of the health of its citizens. And the political class will be held accountable.