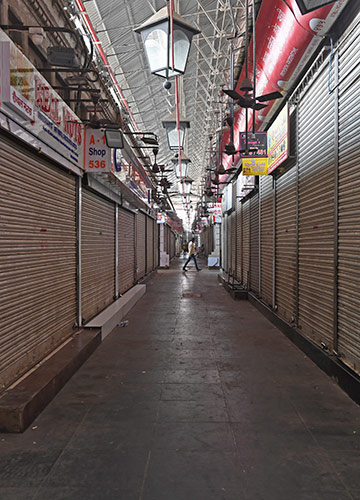 Out of business: Crawford Market, one of the busiest markets in Mumbai, is largely deserted these days after the government imposed restrictions | Amey Mansabdar

India’s economy came to a grinding halt after the lockdown in March 2020; the GDP contracted 23.9 per cent in the April-June quarter. However, as the restrictions were eased, the rebound was sharp, across the board—be it passenger vehicle sales, airline traffic, industrial production or retail consumption. But, the second wave of Covid-19 now threatens the nascent economic recovery.

The situation is already bad in Maharashtra, one of India’s most industrialised states. The state government has imposed Section 144 till May 1. While it is not a complete lockdown, there are major restrictions, including closure of non-essential retail, hotels and bars. Manufacturing, not part of essential services and not export oriented, has been closed, too. Several other states such as Delhi, Karnataka, Gujarat and Uttar Pradesh, have night curfews.

The restrictions are already having an impact on business across the country. As per the Confederation of All India Traders, retail business fell 30 per cent in one week, while consumer footfalls reduced by almost 50 per cent. People reducing travel is affecting airlines, too. In the week ended March 27, there were 2.51 lakh average daily fliers, according to ICICI Securities. This reduced to 2.39 lakh in the week ended April 3.

The hospitality industry, too, is set to take a big hit with international travel restricted and domestic travel plans being postponed. In 2020, hotel occupancy rates in Delhi tumbled 32 per cent, while Bengaluru saw a 39 per cent slump, as per consulting firm JLL. It stated that the surge would have some impact on both commercial and leisure hotel markets across the country. In particular, business travel, which accounts for a lion’s share of the market, is expected to see a muted recovery.

Several festivals—like Gudi Padwa, Ugadi, Vishu, Vaisakhi, Bihu and Chaitra Navratri—fall in April. However, Covid-19 has dampened overall consumer sentiments and this is likely to have an impact on automotive sales, said the Federation of Automobile Dealers Association of India. “Fear among consumers has started keeping them away from making high-ticket purchases,” it said. “The effects of the same can be seen in the two-wheeler category, where inquiry levels are low.” Maharashtra contributes around 10 per cent to 11 per cent of the auto retail market and the current lockdown will have “catastrophic effect” on overall sales in April, it added.

The services sector undoubtedly has been impacted a lot, because of the restrictions across states. But, a fall in consumer demand will also have an impact on industrial production. Manufacturing activity already remains weak, with the index of industrial production contracting 3.6 per cent in February. Industry body CII conducted a poll of 710 CEOs and as many as 75 per cent of them indicated that they expect partial lockdown measures could impact the movement of labour and goods, which would affect industrial production significantly. 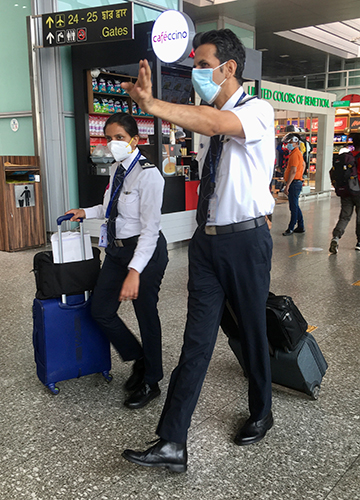 Aditi Nayar, chief economist at ratings agency ICRA, said the immediate impact of localised restrictions will be on contact-intensive services (such as tourism). “The impact on the wider economy will depend on how long the surge continues and to what extent additional restrictions are imposed,” she said. “The pace of GVA (gross value added) growth in Q1 of FY22 may be restricted to 20 per cent to 25 per cent, the way the restrictions are panning out, versus our earlier expectation of a 27.5 per cent growth.” She added that growth though restricted would still be high given the low base of the lockdown in April-May 2020.

Ratings and multilateral agencies forecast a double-digit rebound in India’s economy this year. Credit ratings agency S&P forecasts a growth of 11 per cent. Fitch sees the GDP growth even higher, at 12.8 per cent. However, controlling Covid-19 remains key, said S&P.

Last year’s lockdown resulted in a rise in non-performing assets. Further disruption in economic activity in key states would be a setback for fragile business sentiment and will, in turn, weigh on NPAs. They are already expected to have risen in the previous quarter, after the apex court lifted the moratorium on loans announced post the lockdown last year.

But, despite Covid-19 cases hitting record highs, the impact of current restrictions is unlikely to be as big as that of the last lockdown, say analysts. Sonal Varma, chief India economist at Nomura Securities, said: “Lockdown measures are less draconian and it is being countered by an aggressive vaccination campaign.” But Varma feels that a worsening second wave could have an impact on GDP growth in the April-June quarter. Nomura has lowered its 2021 full year GDP growth estimate to 11.5 per cent from 12.4 per cent. 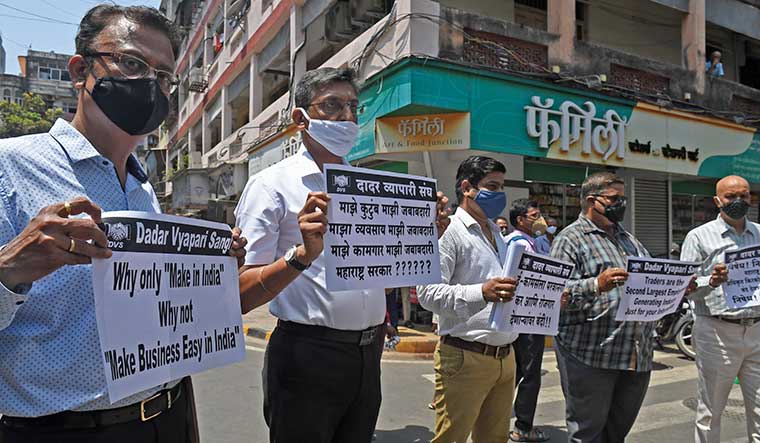 Matter of livelihood: Traders in Mumbai staging a protest against the restrictions imposed by the state government | Amey Mansabdar

Employment in February 2021 compared with the average of 2019-2020 shows a loss of three million jobs among business persons, of 3.8 million jobs among salaried employees and 4.2 million among daily-wage earners, as per the Centre for Monitoring Indian Economy (CMIE). Mahesh Vyas, MD and CEO of CMIE, said that the recovery of jobs seemed to have stopped 2 per cent short of its earlier level. “Recovery of non-farm jobs seems to have stopped 4 per cent short,” he said. “It is important that a fresh lockdown does not make this worse. Vaccines and masks are a better bet.”

With India approving a third vaccine for emergency use, the hope is that the Centre will now focus on how people could be vaccinated speedily. “Vaccinating a much larger proportion of the population will be vital for India’s growth prospects,” noted S&P. The bottom line then is that inoculating the population fast and effectively may well help in saving livelihoods, too, not just lives.