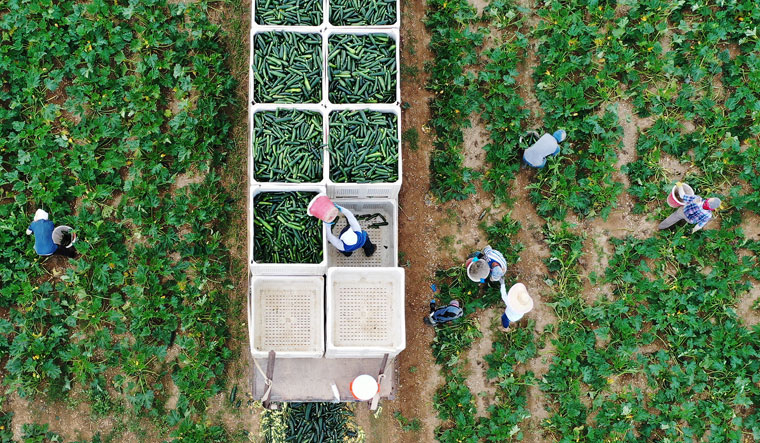 Squash season: An aerial drone view of farm workers on the Sam Accursio & Son's Farm in Florida, as they fill up bins in the back of a truck with zucchini | Getty Images

On October 22, during the US presidential debate, Donald Trump and Joe Biden had an argument over farmer subsidies. Trump boasted that he had paid $28 billion of subsidies to the farmers, to which Biden responded that it was taxpayers' money. The money was paid by the US government to help farmers tide over losses due to trade restrictions with China—the third-largest importer of America's agricultural products, particularly soybean and corn.

Since the sanctions, the US farmers have relied heavily on government support and got 40 per cent of their net cash income from it. The doles given to American farmers in 2020 amounted to nearly $46 billion. The European Union's common agricultural policy (CAP) gives out $64 billion per year in farming subsidies to its 27 member states. This amount comprises nearly one-third of the EU budget.

Even in the free economies, agriculture is not left to the mercy of market forces. The agriculture sector is affected the most by volatility in prices, so it requires government interventions. In November 2019, when Prime Minister Narendra Modi decided to stay out of the Regional Comprehensive Economic Partnership, one of the intentions was to protect Indian farmers from dumping of dairy products. His legislation to open up the agriculture sector to the private sector, however, has alarmed Indian farmers.

The US and other western countries have been pushing India to open up the agriculture sector. While India could learn from the experience of the US in creating agricultural infrastructure, the ground realities are totally different in the two countries. “American farms are big. But Indian farms are small. Their system is very open,” says M.S. Kang, adjunct professor, Kansas State University and former vice chancellor, Punjab Agriculture University, Ludhiana.

Kang spent 40 years in the US and owned a 100-acre farm in Texas. “In the US, there are large farmers who can afford expensive equipment. They use computers and do precision farming,” he says.

Precision farming involves using technology to feed fertilisers and water, and to ensure the quality of seeds for greater productivity. It cannot be done on smaller farms. American farmers could adopt it in a big way through mechanisation of farms. Hybrid seeds helped them emerge as top producers of many crops. In contrast, India spends far less on research and development in the agriculture sector.

Over 80 per cent of Indian farmers have two to five acres of land. Farmers in Punjab and Haryana sustain themselves through minimum support price (MSP). Their input cost is much higher than the input costs of the bigger Indian farmers due to economies of scale, and they cannot survive on farm income alone. The government wants to minimise their dependence on farming, by nudging them either into allied fields or into contract farming so that smaller farms can be pooled for greater crop benefits. But, for a migration of farming workforce to other sectors to happen, more jobs have to be created in non-farming sectors.

In the US, less than 2 per cent of the population is engaged in agriculture, while in India the figure is nearly 70 per cent. Economists argue that unless dependence on agriculture is reduced, it will take a longer time for India's economy to rival those of China and the west.

Agriculture expert Devender Sharma says that every five years the US comes out with farm bills to give subsidies. The last farm bill in 2018 made a provision of $867 billion for the next 10 years. Despite so much support, farmers have faced bankruptcy there, he says.

“India should not follow America and Europe,” says Sharma. “It is a failed model. They had witnessed an open market economy for the last six to seven decades. They do not have an MSP, or agriculture produce market committee (APMC) system or upper stock limit for Walmart. They have contract farming and commodity exchange, and their farmers are saddled with bankruptcy of $425 billion in 2020.”

China, which has a higher growth in agriculture, has combined all input subsidies into a single scheme, making direct payment to farmers on a per hectare basis. However, India spends higher on subsidies on different inputs like power, fertilisers, credits and loan waivers.

Sharma says India can be the role model for the world with an effective MSP and APMC mandi system. Today MSP is given to only 6 per cent of Indian farmers. While MSP is technically available for 23 crops, the government procurement—which ensures MSP—is available only for wheat and rice. These 23 crops cover 80 per cent of cropping area in the country. Sharma says if farmers are assured of MSP even when the government is not procuring all of it, the condition of farmers will improve.

“In the US, farmers get only 8 per cent of the total cost of a product in the value chain,” he says. “According to Amul, the milk farmers get Rs70 out of Rs100 cost. Why can’t we replicate the Amul model for vegetables and crops?”