Of cheat weeks and lost muscles

With gyms shut, fitness fanatics found it hard to stay toned and on diet

Flab to fab journeys came to a screeching halt. The number of shirtless selfies on social media dwindled as abs began to be a no-show. Soon, the muscled folk woke up to the fact that international chest day is known as Monday in common parlance.

Days before the nation plunged into a total lockdown, gyms downed shutters, much to the chagrin of fitness enthusiasts. However, the realisation that you don’t anymore need to classify your breakfast into pre- and post-workout meal, measure your meal to the last gram and grain, and fret over the fat in everything but plain old water, took some time to hit. And, when it did, it hit hard.

It was all hunky-dory in the first few days of no training. While the rest of the world cared much about WHO’s ‘test, test, test’, the fitness enthusiasts heard ‘rest, cheat (a bit), recover’. We will all get back to hustling again, blasting every possible workout music, and pump iron with renewed zest. After all, it is just 21 days; sure the vascularity will be lost, there will be some muscle atrophy and loss of strength, and some inches added to the waist. But the off-season weight gain happens to the best of them too, to the Mr Olympias, pro-bodybuilders and the rest of the champs. Who said off-season is only for the pros? The average gym rat, too, deserves an off-season. These were some of the thoughts running through the minds of the gym rats. 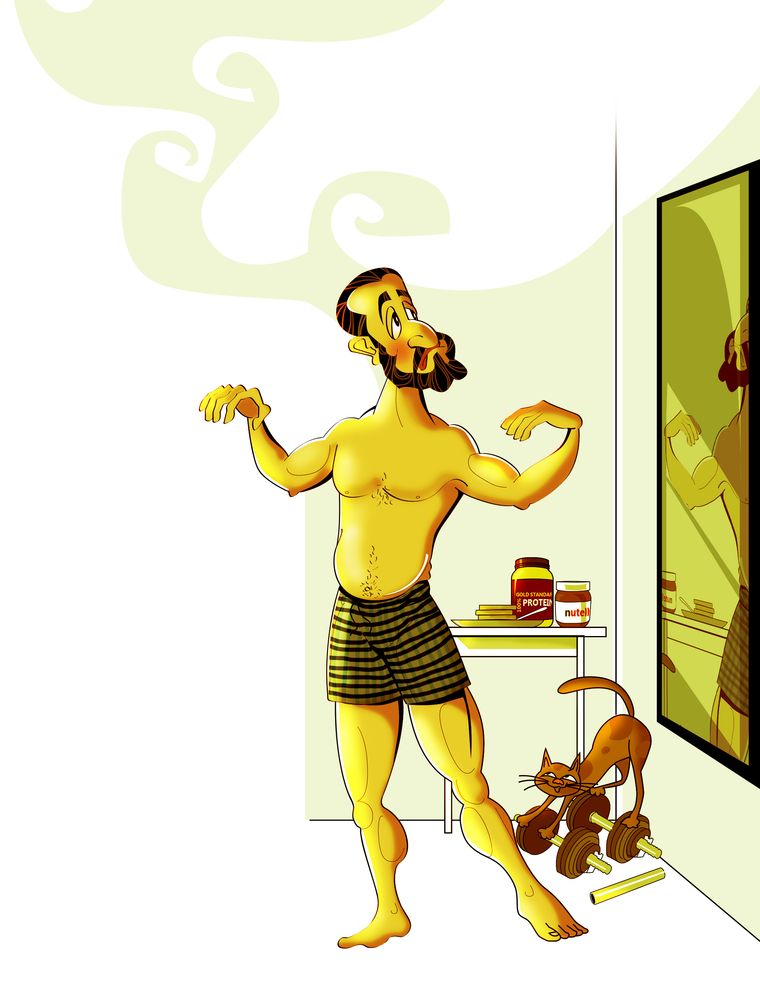 Twenty-one days later, a month passed. Muscle atrophy was now a real thing, as egg whites and chicken breasts gave way to fries and the comforts of Nutella jars. After a few more weeks and lost muscles, the mirror on the wall, which had been a witness to plenty of flexes and poses, had begun reflecting an average Joe.

Nonetheless, influencers on Instagram, coaches on YouTube, and every other jacked dude and his uncle on the internet continued to influence, coach and inspire—with post-home-workout selfies replacing their post-workout gym selfies. The fit and fab celebs did not help to boost the spirits of the fitness fanatics either. Even those celebrities who had the luxury of the gym at their bunglows got on to the ground to press up, pull up and burpee to post selfies and videos of home workouts and throw challenges at each other. Because, you gotta put to use those #FitnessIsLifestyle, some time! And they looked fab as ever to the envy of the average, now not-gym goer.

It was not as if the troubled weightlifters, fitness enthusiasts and every aspiring ab maker had not done anything to grab the attention of the authorities to force them to allow gyms to re-open. There were protests in various parts of the country by trainers and owners of gyms, with a few chiseled men pushing up in protest in the streets. The protests were not exactly reassuring. No, not because I am against protest, push up, or a combination of them. My objection was merely against them keeping their washboard abs and bulging biceps intact, still holding the pump, after all these months of staying away from iron.

It was time to turn to my gym bros for a little (de)motivation. We are all together in this muscle-less universe, right? After all, all the spotting, exchange of bro science, diet tips, carb bashing, bragging about the bench press PR (personal record), flexing together, and comparing sizes (of biceps, you perv) for far too many sweaty hours have brought us all closer in this pursuit of vanity, nay, better health.

Wrong! They all ditched—almost all the muscled buddies of mine took to some new forms of training! There were those who took to running, skipping, yoga, pacing up and down countless number of stairs, swimming, badminton, basically doing everything possible to ward off the lockdown-induced flab. A lot of crossfit videos and a Cult.fit link, too, followed.

Some had dusted off the fitness bands that were purchased on a whim, and were abandoned the very next day because a band could never replace the feel of iron. Others who had an old dumbbell or two lying around cosied up to them. The avalanche of home workout videos that flooded the internet, too, helped some to cope with the absence of iron. Get a spade ready and get on to the field, “coz digging is the best form of cardio,” I was told by one, while another muscled hunk waxed eloquent about saluting the sun, as I continued with my efforts to find solace in shared misery. More disheartening was the weight-loss journey a friend was gracious enough to share. “Never managed to lose so much weight when I was lifting regularly,” he said, as if telling me that he is not with me in this predicament was not wicked enough.

But can any of these jumping, skipping and running around, ever replace gyms, I wondered. What is a weight training session if you do not ego lift a bit, let out a Ronnie Coleman-ish “light weight baby” as you squat in the comfort of a smith machine, compare your PR with the bro next bench, and show off your guns to the newbie with unlimited supply of queries about getting washboard abs and Dwayne Johnson-isque traps in less than three weeks!

Well, in the end, I cut myself some slack, got back to the groove and did show up at the gym on the day it reopened. But not before realizing that while I let my slothful side rule over me during the gymless days, most of my fit friends did prove that hashtags aside, fitness is indeed a lifestyle.

When it comes to fitness, Anil Kapoor is the man to take a few tips from. The virus and the lockdown did not stop the star from showcasing what most gym rats believe is the pinnacle of fitness—the courage to post a shirtless torso.

All you need to stay fit during the lockdown is a “wall and will power”, said Kapoor while posting one of his workout videos on social media in May. He followed it up with a set of shirtless photos in October. “This papa doesn’t preach,
just removes his top and walks to the beach,” he captioned the photos, shot on a beach.

Well, the wall (and a personal trainer) can work wonders, if you have the will.