Covid-19 brought the world to a halt, but homes were abuzz with activity 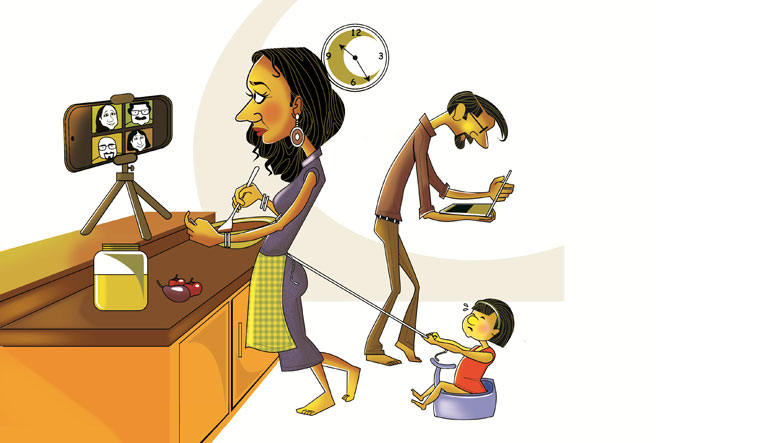 In March, when the novel coronavirus was picking up pace, a battle, sans the bloodshed, gathered steam inside many homes.

There were significant decisions to be made. Who gets the work desk by the window—the wife who just debuted into the work-from-home space or the techie husband who has been a veteran in the scene; who attends to the four-year-old’s urgent ‘poop-call’ if both parents were on Zoom meetings; who is in-charge of the groceries? The list kept growing.

Work-life balance seemed like a utopian theory and boundaries of time and space blurred.

“I have no clue how time passes. I am cooking curry for lunch at 9am, and still doing the same past noon.”

Pratibha Anand, a 34-year-old mother of two, sounded desperate as she spoke of a typical day. While she worked on a presentation, stirring the curry in between, her toddler would decide it is time for a snack or her seven-year-old would need the force of parenting to stay glued to his online class.

Homes had turned into a circus-of-sorts, with juggling being the prime act.

The circus’s soundtrack was a medley. In sync with the click-clack of laptop keys came the pressure cooker whistle, shrieks from sibling fights—all held together by ‘Baby Shark’ blasting on YouTube. If you were luckier, there would be more action—a new form of indoor cricket ending in the vase on the shelf being consigned to the waste bin, and someone practising online Zumba in the apartment right above yours.

Children wondered if it was an extended holiday, now that parents were at home. Innovation at home was at an all-time high with parents coming out with all possible do-it-yourself ideas and games to deal with the situation.

The pandemic had also triggered a new home phenomenon. Everyone seemed to be hungry and craving snacks more than the usual.

“Father God, I am a child of God. What I am not is a home school teacher. God, I’m at home. But Lord, ain’t no teaching going on around here.”

This prayer by US mother and comedian Brandalyn Shropshire went viral amid the pandemic-induced lockdown and it is no surprise why. Shropshire’s desperate plea for heavenly help in home-schooling reflected sentiments of moms and dads across the world as schools shut, and reopened in virtual avatars.

If achieving targets at home and work was not enough, parents had a new task at hand—revisiting their school days, only the academic part of it. And that was no fun.

From understanding the concept of fractions, differentiating between phonic sounds of ‘c’ and ‘k’ to relearning that Pluto is no longer a planet, the struggle was the same whether you were in the US, India or elsewhere in the world. Parents of kindergarteners who walked into the world of schooling through the doorways of classroom apps, had to figure out ‘pincer grip’ and ‘motor skills’ and felt the weight of responsibility of ensuring their child was holding the pencil the right way. The future was in their hands for real now.

And there were significant learnings, too. The truth that nothing in the world can lure children into watching their school teachers on a screen dawned on adults.

“My parents realised I am not the same person they sent out to college.”

Closure of college campuses during the lockdown meant that students had to return to homes—back to old rooms, household chores and parents’ rules. It was also a return to fights over who gets to control the television, who gets the bean bag or who cleans the room.

For the likes of Asmi Roy, who have stayed away from homes after going to college, the lockdown has been nerve-wracking. “It’s crazy. I miss my independence,” she said, adding that she sometimes sneaked on to the terrace of the vacant house next door to plug in her headphones and be at peace.

With classes resuming online, hopes of finding that independence again were deflated.

The pandemic wrecked the experience of college life and simple joys are sorely missed—friendships, conversations at the tea stall, night-outs, and more. Bunking classes, however, is not on the list; it just got easier with online sessions.

Evolving with the times, ‘network error’ has become the substitute for proxy attendance. Professors addressed soulless device screens. As their voice notes dissolved into the ether, at least one student snuggled up in bed or binge-watched a series.

And those who were not smart enough to turn off the camera or microphone, risked irreparable damage to their social image and relationship with the professor.

“Hello everyone, welcome to my channel!”

If time was to be classified into Before Corona and After Corona, the latter period will boast of the evolution of a clan—newbie at-home YouTubers. Homes turned into production rooms as the young and old launched YouTube channels.

Be it tips to look your best on Zoom calls or teaching the Marie Kondo style of folding your jeans, new YouTubers entertained with quirky content from homes. So much so that a nine-year-old Indian boy made his viral YouTube debut with a video on how to wash your underwear.

The lockdown has not solely been about family members being at each other’s throats. ‘Family time’ was back; conversations were in vogue again, the carrom board was dusted and playing cards made a reappearance.

Even amid the pandemonium, it is all these and more that make a home a home.

Lockdown proved that celebrities were also mortals who had to sweep, mop and do the dishes. After Bollywood actor Katrina Kaif cleaned her living room floor in a viral video, actor Vicky Kaushal shared a video of him cleaning the ceiling fan at home. “Thought I’d interact with my fans today,” he said. Pun intended.