Winning against the virus

Contrary to the media portrayal, we have done reasonably well against the virus 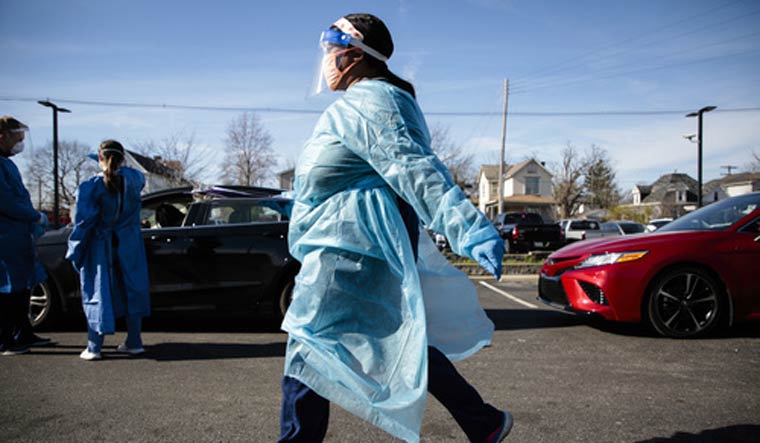 A nurse carries a COVID-19 test back for processing on Thursday, Nov. 19, 2020 at PrimaryOne Health in Columbus, Ohio | Joshua A. Bickel /The Columbus Dispatch via AP

I remember my first interaction with COVID-19. I was called to evaluate a patient with chest pain in the ER. It didn’t sound like the classic ‘angina’ chest pain, but the peculiar aspect of this patient was that his oxygen levels were low. We had learnt from our overseas colleagues, that chest pain was one of the presenting symptoms of the disease. ‘Suit up’, I told my nurse practitioner, this may be our first COVID-19 case. With personal protective equipment, I felt safe managing patients who were infected with the virus. The patient did have COVID-19 on testing and did well with supportive treatment. Over the next few weeks, we had a whole slew of COVID-19 patients, most did just fine, but some required ventilatory support and a few requiring advanced circulatory support-a process where a machine adds oxygen directly to the blood, because the lungs are incapable, despite being on a ventilator— a procedure called ECMO (Extracorporeal membrane oxygenation). The virus was in our midst.

I am a news and science junkie and picked up on the news story of a strange respiratory infection in Wuhan through the internet as we entered the new year. On January 12 the WHO declared a new virus infection, initially terming it 2019 novel coronavirus (2019-nCov), and later in February changing the name to coronavirus disease 2019 (COVID-19). I watched as the infection ran through the Wuhan province, the military called in and the city barricaded, but it seemed to be too far away to a problem for us. I remember telling my team about it, and commenting that we were fortunate that it wasn’t in our country.

On January 21 the virus reached our shores via a man who had travelled to Wuhan. The WHO continued to waffle about calling for an international health emergency and decided not to do so. On January 28, the United States suspended all flights to China-by this time there were five cases in our country. China finally agreed to let in a WHO team of experts to aid with research and response. The WHO team finally arrived on Beijing-Feb 16, by which time the disease is all over the world. On March 1, my state, Florida declared a state of emergency and we were placed on notice as health care professionals. On March 11, the WHO finally declared the coronavirus a pandemic and the US suspended entry to all foreign nationals travelling from Europe for 14 days before their scheduled travel. The world is in chaos by this point, with stock markets plunging and multiple travel bans. On March 13, the president declared a state of National Emergency under the Stafford ACT-which coordinates federal and state responses to disasters. The total number of cases in the USA —2,750 at this point. The federal government along with the private sector began the mass production of ventilators and personal protective equipment.

While this timeline may seem long to many, it’s a very fast move to shut down commerce in the world considering the world has never been so connected. The medical community’s response was astounding, to say the least. The first WHO notification of the disease was December 31, and by January 5, the genome sequence of the virus was mapped. The vaccine companies immediately started working on DNA and RNA vaccines. For perspective, these are called the third-generation gene vaccines, and there has never been a successful gene vaccine to date, but we are already in advanced phases of vaccine trials. The first diagnostic PCR kit is available on January 11. The Johns Hopkins University launched a global dashboard to track COVID-19 spread in real-time by the end of January. Gilead released stockpiles of Remdesivir for compassionate use.

We watched the carnage in New York City with hospitals running out of personal protective equipment. The pattern was starting to be clear though, heavily populated areas were taking the brunt. It hit home for us towards the end of March. I was supposed to head out for a ski vacation with the family. The night before we left, the ski slopes closed. The vacation turned out to be a week of setting up a command centre and coming up with protocols to manage the expected surge of patients. We immediately cut back on the overuse of PPE and in the next week, all elective surgeries were cancelled. A committee was formed for urgent cases, and only emergencies continued. There was a tent put up adjoining the Emergency room for all suspected COVID-19 patients, and a dedicated floor for all potential and confirmed cases. All PPE equipment was dedicated to these zones. We anticipated health providers getting sick— back-up call and a second back-up roster was established. It was all voluntary and the physician community came together. Outpatient offices were closed and we waited. Nothing happened. We had a few cases, and some real sick patients need advanced medical support, but nothing on the lines of the predictive models. The virus was taunting us again.

The truth was that social distancing, which wasn’t a problem in a spread-out town like mine, worked. There was a second problem brewing though, we were still spending money to keep ourselves ready, but were not treating patients, and smaller practices like mine were running out of money. We have a staff of close to 60 and were weighing salary cuts when the government came up with a pay check protection plan, which guaranteed small businesses payroll for six weeks. This bailout, helped a lot of small businesses survive.

The virus continued to make the best minds look stupid. All the projections regarding bed demand were off by a huge margin. We started with “masks don’t work”—the staff was initially instructed to not wear masks routinely to conserve PPE. We are now all masked like the rest of the country. As I write this, there is a spike in Europe, despite mask mandates. We learnt that if you were healthy and less than 65 years old, the mortality rate was less than one per cent, but if you were older, it rocketed up to 14 per cent. We learnt that it was a disease of the blood vessels, and people with hypertension, obesity and diabetes were at highest risk, as they already had compromised blood vessels. We also learnt that the body’s overactive defence systems caused more damage than the virus did and paradoxically suppressing this overacting immune response with steroids helped.

On a personal note, the virus never scared me. I am a man of science and the odds of me making it were very high. I didn’t miss a day of work, through the pandemic. A lot of people around me did contract it, but recovered and are back to productive lives. When the pools and gyms were closed, we took to swimming in the ocean more regularly. The authorities briefly considered closing the beaches and the population went ballistic, as it made no scientific sense if people were social distancing, that policy was reversed pretty quickly. I worked on my fitness religiously through, with triathlon training-swim, bike and run, careful to not over train, to prevent my immune system from getting strained.

My wife is a physician too. We had a plan if one of us got sick, but so far, we have managed to surprisingly dodge the virus. When the disease first hit, we sat the kids down and explained that one of us would probably get infected. I remember coming home one day, and finding a notice on the side door, which I use to enter the house, asking me to remove my shoes in the garage, my clothes in the laundry room and head straight for a shower. It was signed by “The COVID Committee.” Neither of us got infected. Life is back to normal. Swim meets and soccer matches are back on the schedule with as much masking possible. The children are back to school. Testing in the hospital is in full force, we have adequate PPE and Remdesivir has finally been officially approved and through operation warp speed seven vaccines are in phase 3 trials which are the last phase testing for efficacy and safety.

Contrary to what the media portrays, I would say we have done reasonably well, given that we are at war with a completely new invisible species. You cannot hide from a virus. We have lost a lot of people, but in my opinion, living is a risky proposition. I fail to understand the over-reliance of people on a government system riding in to save the day. The only person that knows your body is you. The government's job is to facilitate education and treatment, but the risk you face is dependent on you and how you have managed your body over the years. If you have a weak immune system, and multiple comorbidities, COVID-19 is just one of your worries. The only thing you can do is decrease your risk by eating right, exercising, and avoiding stress. If you do have risk factors, it’s your responsibility to take appropriate precautions. You could still die of a myriad of causes, but you stack the odds in your favour as much as possible. Treatments are more likely to succeed if your underlying risk is low. The truth is the game of life and death is not stacked in your favour, and this is one of those games in which the house always wins. The way you play the game however is your choice.