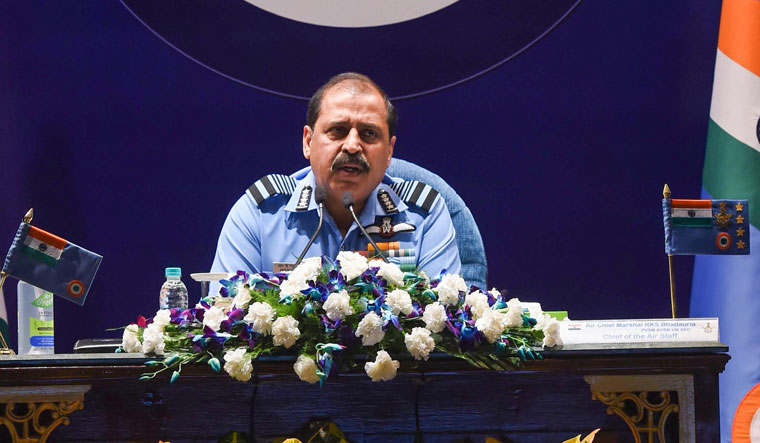 Air Chief Marshal Rakesh Kumar Singh Bhadauria led the team that negotiated the purchase of 36 Rafale jets from France, but he is a strong supporter of the Make in India programme. He played a major role in the development of the indigenously-made light combat aircraft Tejas. In an exclusive interview, Bhadauria explained why being self-reliant is the only long-term solution to ensure India’s security. Excerpts:

Q/ How is the Air Force preparing to become self-reliant through the Atmanirbhar Bharat mission?

A/ The vision of Atmanirbhar Bharat finds innate resonance with the planning process in the Indian Air Force. The IAF has had indigenously designed aircraft such as HT-2 and HF-24, and versions of Kiran and the [Tejas] MK1. Among indigenously manufactured aircraft are the Gnat, MiG-21, MiG-27, Jaguar, Avro (HS-748), Chetak, Cheetah, Dornier 228, Hawk and Su-30. [Also, the domestic industry has] upgraded MiG-21, MiG-27, MiG-29, Mirage, Jaguar, Dornier 228, An-32 and Mi-17.

Q/ How self-reliant is the IAF in air-defence systems?

A/ All our current inductions in the ecosystem of ground-operated radars are either indigenously designed or made by Bharat Electronics Ltd. Among airborne radars, we have already inducted the AEW&C (airborne early warning and control system). We have also inducted indigenous missile systems and locally manufactured early-warning suites for our fighter fleet. Certain critical operation support systems such as the integrated air command and control system (IACCS), the air force network (AFNet) and integrated materials management online system (IMMOLS) are completely home-grown.

Q/ Which are the future air assets—like fighter jets, transport planes, helicopters and trainer jets—that can be made indigenously?

A/ The indigenous projects that we wholeheartedly support include the advanced light helicopter, Tejas MK1A and its future upgrades, light combat helicopters, and the HTT-40 trainer jet. In medium- to long-term, we have placed our trust in the fifth-generation advanced medium combat aircraft project. The Avro replacement project, which will be under Make in India, has the potential for orders from the civil sector as well. Overall, our requirements provide a huge opportunity for the domestic aviation industry to evolve rapidly.

Q/ What is the scope of the Atmanirbhar Bharat mission in the IAF?

A/ [The Air Force wants] the domestic industry to develop niche technologies specific to military aviation. This is indeed a golden period of opportunity for all stakeholders in the Indian aviation industry. We must remember that in the long run, a strong, indigenous and self-reliant defence ecosystem is the only counter to the technology, weapons and platforms that our adversaries have or will have.

Q/ Is being self-reliant the only solution to future wars?

A/ India’s wars—today or in the future—will have to be fought by us alone. Atmanirbharta is the only long-term solution.