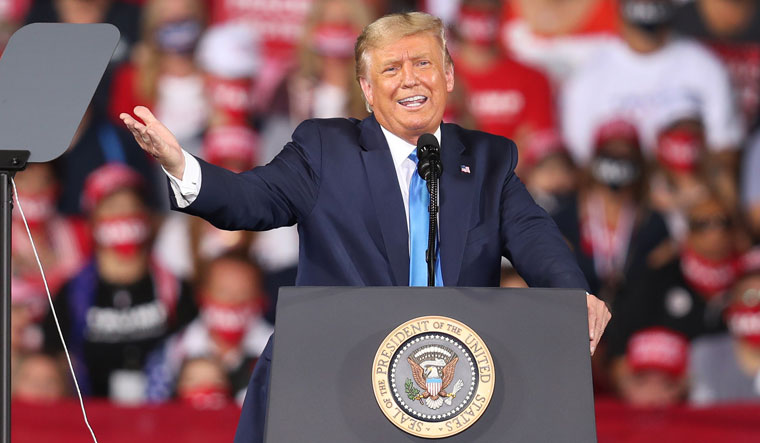 Renaming the virus: United States President Donald Trump at a rally in Jacksonville, Florida. Trump has often called the novel coronavirus 'China virus', claiming that he has evidence it was manufactured in China. Yan's report fits well with Trump's 'China virus' narrative | AFP

"The China virus.”  The words reach a crescendo as they roll out of President Donald Trump’s mouth, clearly showing his irritation. He is rebranding Covid-19 as the ‘China virus’ and has claimed, without any proof, that he has seen evidence that it was manufactured in China.

Out of the darkness about how the virus left the city of Wuhan and spread across the world, a report from a Chinese virologist who fled to the US has gone viral among the conservative media in the United States. It fits well with Trump’s China virus mantra, which has become one of the mainstays of his reelection campaign.

Is it all too convenient? Does the report stand up to scrutiny?

The report titled “Unusual features of the SARS-CoV-2 genome suggesting sophisticated laboratory modification rather than natural evolution and delineation of its probable synthetic route” is authored by Dr Li-Meng Yan, a virologist who claims to be one of the world’s first scientists to have studied the new coronavirus and to have discovered that it originated in a People’s Liberation Army lab, though the report only alludes to it as a possibility.

Yan fled Hong Kong saying she feared that she would disappear along with her evidence. “I have to hide because I know how they treat whistleblowers. As a whistleblower here I want to tell the truth of Covid-19 and the origin of the SARS-CoV-2 virus,” she told Fox News.

The Yan report is presented in conjunction with Shu Kang, Jie Guan, and Shanchang Hu, all listed as PhDs with the Steve Bannon-run Rule of Law Society and Rule of Law Foundation, a group with no previous experience working on infectious diseases. Bannon was Trump’s chief strategist and was arrested recently on a fraud indictment. He was picked up from a yacht owned by renegade Chinese billionaire Guo Wengui.

Putting aside questionable political motivation, and there is certainly plenty to look at there, the report, though not technically inaccurate in many of its individual statements, spins a tale of possibilities about the origin of the Covid-19 virus based on unsupported claims, beliefs and unexplored anecdotes. It projects a sensational circumstance favourable to Trump’s political line.

Couched in confusing scientific jargon, the report moves quickly to set up possibility as evidence. It leaves interpretations in the air and concludes by innuendo,  basically sowing doubt about the likelihood of current explanations and thus inferring that the virus is man-made. But the report fails on several levels to show that its findings are legitimate.

“The evidence shows that SARS-CoV-2 should be a laboratory product created by using bat coronaviruses,” says the report. Beyond that, the authors claim that a “synthetic route” to create the virus makes its laboratory creation “convenient,” and that they will demonstrate that it can be done in approximately six months.

The writing shows that the authors derived their hypothesis by questioning the veracity of the theories about the origin of the virus. But it ignores evidence to the contrary. “Even if we ignore the above evidence that no proper host exists for the recombination to take place and instead assume that such a host does exist, it is still highly unlikely that such a recombination event could occur in nature,” says the report.

Kristian Andersen, professor of immunology and microbiology at the Scripps Research Institute in San Diego, California, disagrees. His research uses infectious disease genomics to investigate how pathogenic viruses emerge and cause large-scale outbreaks. Summarising a peer-reviewed study he co-published in the journal Nature Medicine in March, Andersen says, “By comparing the available genome sequence data for known coronavirus strains, we can firmly determine that SARS-CoV-2 originated through natural processes.”

Andersen and his co-authors say the new virus likely emerged because of natural selection, a process by which organisms adapt to their environment to survive. Yan, however, chose to ignore Andersen’s study. “The receptor-binding motif (RBM) within the spike protein of SARS-CoV-2, which determines the host specificity of the virus, resembles that of SARS-CoV from the 2003 epidemic in a suspicious manner. Genomic evidence suggests that the RBM has been genetically manipulated,” says the Yan report.

Andersen’s team, however, looked specifically at the spike proteins and their gene sequences and found that “the spike proteins were the result of natural selection and not genetic engineering”. Yan’s case for in-vitro manipulation of the virus ignored such contradictory findings.

Andersen says Yan’s report lacks scientific merits. “It is non-scientific and false — cherry-picking data and ignoring data disproving their hypotheses. It is using technical language that is impossible to decode for non-experts — poppycock dressed up as ‘science’,” he tweeted.

Columbia University virologist Angela Rasmussen thinks the analysis by Yan and her team did not adequately support their claims. “These claims are, to use some virology jargon, total horseshit,” tweeted Rasmussen. She told The Daily Beast that Yan’s claims were all circumstantial and that some of them were entirely fictional. She debunked Yan’s sensational claim that “the coronavirus’ genes are suspiciously similar to that of a bat coronavirus discovered by military laboratories,” asserting that the similarity was natural. Meanwhile, Carl T. Bergstrom, professor of biology at the University of Washington, says the Yan Report is a “bizarre and unfounded preprint”. 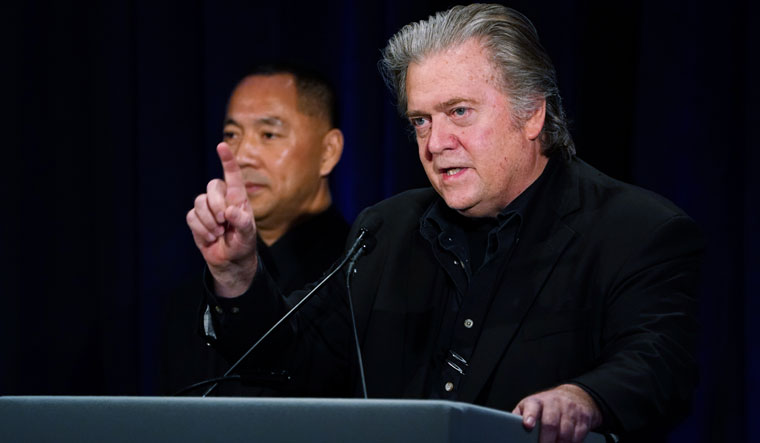 There exists a gap between what the report actually says and the claim made by Yan in multiple televised interviews that she has proof that the Covid-19 virus was manufactured by the Chinese Communist Party in a Wuhan lab. “I can present solid scientific evidence to our audience that the SARS-CoV-2 virus is actually not from nature,” she told Fox News host Tucker Carlson on September 15. “It is a man-made virus created in the labì. The very unique bat coronavirus, which cannot affect people, becomes a very harmful virus after the modification.”

A few days after it featured Yan, Fox News defended a defamation lawsuit in a Manhattan court, arguing that “no reasonable viewer takes Tucker Carlson seriously”. The judge accepted the argument and threw out the case. So, by the network’s own admission, the Tucker Carlson show is not one where you get the facts, yet that was where it chose to let Yan tell her story.

In the end, Yan’s data does not support her conclusions. It reaches its goal of linking the message through a series of beliefs and suppositions. It does not demonstrate that it could be done, rather shows that it could possibly be done. Mere possibility, while sensational, is not probability, as it implies resources and motives not necessarily available.

But the motives behind the report are raising eyebrows. The Daily Beast pointed out that “the Rule of Law Society and Rule of Law Foundation websites indicate that the organisations have not previously published scientific or medical research.” Machiavellian moves by Bannon no longer elicit surprise, but his involvement in the production and release of the Yan report suggests that it is part of a larger, coordinated political effort to advance the “China created the coronavirus” story.

Twitter suspended Yan’s account for making false claims, while Facebook and Instagram flagged retweets of her Tucker Carlson interview. But the conservative media in the US has been repeating the report, despite the global scientific community questioning and rejecting her claims.

“This preprint report cannot be given any credibility in its current form,” says Andrew Preston, an expert in microbial pathogenesis at the University of Bath in the UK. He told the BBC that Yan’s claims were unsubstantiated. Dr Michael Head of the University of Southampton says Yan did not offer any data that overrode previous research.

It is unquestionable that Yan is now in the Bannon orbit, in that interconnected and interdependent world of politics and power, of information and allusion, of order and disorder, good and bad, truth and fiction. Unfortunately, Yan and her co-authors have put forth their hypothesis as a fact, a conclusion they reached by straying into confusion and assumptions, ignoring more likely paths.