Covid-19 cases decreasing in Hyderabad could be a false dawn 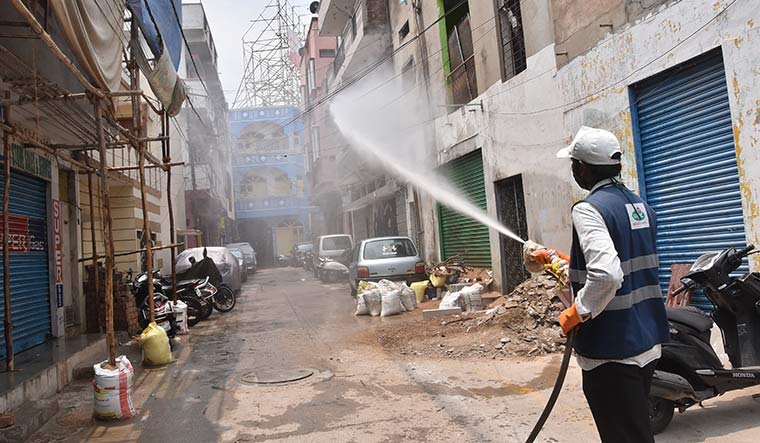 Cleanliness drive: A health worker sprays disinfectant in a containment zone in Hyderabad.

THE GREATER HYDERABAD region has been an area of great concern for the Telangana government with respect to Covid-19 cases. With a population of more than 1 crore—almost a quarter of the state's population—it accounted for more than half of the total cases in the state. Of the 836 deaths in the state till September 1, around 60 per cent have been in and around the city.

Till a few weeks back, the state capital had only one multispeciality hospital and two state-run hospitals dedicated to Covid-19. Chief Minister K. Chandrashekar Rao had expressed concern about the rise in cases in Hyderabad and pitched for continuing the lockdown and night curfew in the city even after Unlock 1.

However, the authorities seem to have turned things around. The city now has more than 100 labs testing for Covid-19 and around the same number of enlisted hospitals. According to rough estimates, around 15,000 positive patients in the city are in home quarantine. The police have busted a couple of rackets which were selling Covid-19 drugs in the black market and have campaigned to encourage plasma donation.

Moreover, cases have fallen in Hyderabad, while increasing in the rest of the state. In the last week of June, over 700 cases were recorded daily in Greater Hyderabad after testing less than 5,000 samples. On August 28, over 62,000 samples were tested in the state, a significant number from Greater Hyderabad, and only 432 were positive.

G. Srinivas Rao, director of public health, Telangana, recently hinted that the curve is already flattening in Hyderabad. Health Minister E. Rajender, who had been heavily criticised for the surge in cases, is a confident man today. "A multi-pronged approach got us to this stage," he said. "We educated people about the virus, and are continuously improving treatment facilities and testing more." He added that the government had also tackled the issue of private hospitals charging exorbitant fees. "There is no shortage of beds or oxygen support," he said.

The minister said: “We feel that the virus is now less virulent. It does not look as dangerous as it was before.” Though discreet about it, state health officials are also pinning their hopes on herd immunity. A recent study by the Centre for Cellular and Molecular Biology concluded that around six lakh people (about 6 per cent of the city's population) might have been infected already. A health official said that this number, if true, shows that the city has survived the pandemic “with just a scratch” as deaths were much lower than predicted.

Giridhar R. Babu, epidemiologist and professor, Public Health Foundation of India does not agree with the government’s view. "The available data is insufficient to assess the spread of Covid-19 in Hyderabad," he said. "But I wouldn’t assume that the curve is flattening so fast. As people come out slowly there is a higher risk of more people getting infected. It does not look like we have reached a stage of herd immunity as the number of positive cases being reported are still high."