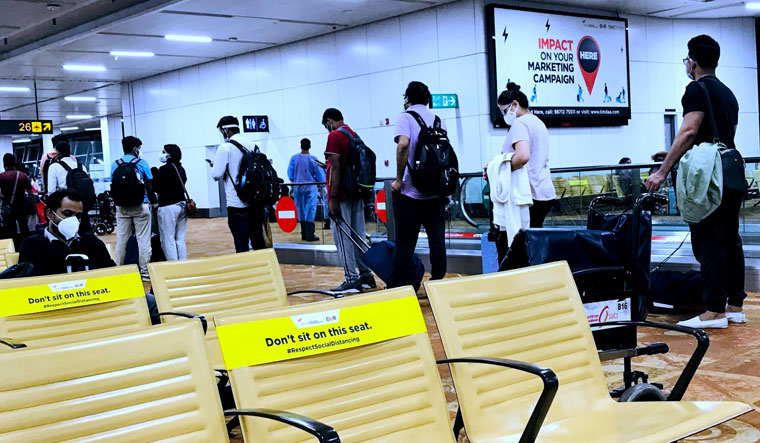 THE SURGE IS here. Of tests for Covid-19 and of new cases. On August 30, India conducted 8.4 lakh tests, recorded 78,761 new cases—a single-day high for any country—and saw 948 people die of the disease. The distribution of the case load and the deaths has not been uniform. The Union health ministry says that about 70 per cent of the cases are concentrated in seven states—Maharashtra (21 per cent), Andhra Pradesh (13.5 per cent), Karnataka (11.27 per cent), Tamil Nadu (8.27 per cent), Uttar Pradesh (8.27 per cent), West Bengal (3.84 per cent) and Odisha (3.84 per cent). Half the deaths reported are from Maharashtra, Andhra Pradesh and Karnataka.

Even as these states struggle to manage their case load, India's Covid-19 story can be traced to its burgeoning metropolises, from where it is slowly spreading out to smaller districts and rural areas. The contagion entered the country with the international traveller through some of its busiest airports, and began ravaging its bustling cities. For the virus, the mega cities proved to be fertile grounds to replicate—crammed hutments in slums standing cheek-by-jowl with plush housing societies, busy markets and sardines-in-a-can scenes in its public transport systems.

Oblivious to the administrative or geographic boundaries and undeterred by a nationwide lockdown, the contagion 'bloomed' in the disease hotspots—from the densely packed slums of Mumbai to the crowded wholesale vegetable markets of Delhi's Azadpur mandi and Chennai's Koyambedu. Sero survey reports suggest that the undetected cases in our cities are several fold higher than the RT-PCR detected cases—about 30 per cent people in Delhi are sero-positive, 16 to 57 per cent are so in Mumbai, 51.5 per cent in Pune (albeit in a smaller, much less representative sample) and one-fifth of Chennai’s population has been exposed to the virus. The Delhi sero-survey, for instance, suggests that about 58 lakh people have the antibodies and virus exposure, while the reported cases are only around 1.7 lakh as of August end.

Cases in Delhi, Chennai and Kolkata have plateaued in the past few weeks, though Mumbai, Pune and Bengaluru continue to struggle. Even as some cities pause to catch their breath, and unlock the economy, experts say it is not yet time to lower our guard. As people begin to move out of homes, testing will remain the key to managing the spread of the virus. “If we look at Chennai, epidemic management can be divided into two phases—pre and post June 20, when we saw the biggest peak. It has been over a month now that we have seen cases stabilise,” says Dr Prabhdeep Kaur, public health expert at the ICMR-National Institute of Epidemiology, Chennai. “What has worked for the city is that for a population of 80 lakh, we are doing 8,000-10,000 tests per day. Positivity rate, which should ideally be under 5 per cent, stands at 8-11 per cent in the city. Mask compliance and people's [willingness] to come forward and get tested have also made a major difference.”

Apart from RT-PCR tests, several states are now doing rapid antigen testing, although the chances of false negatives can be high in the latter. “It does help rule out the positives, but unless the symptomatic negatives are re-tested, which many states are not doing, it does not work. The Tamil Nadu government has made a conscious decision of not doing rapid antigen tests,” says Kaur. 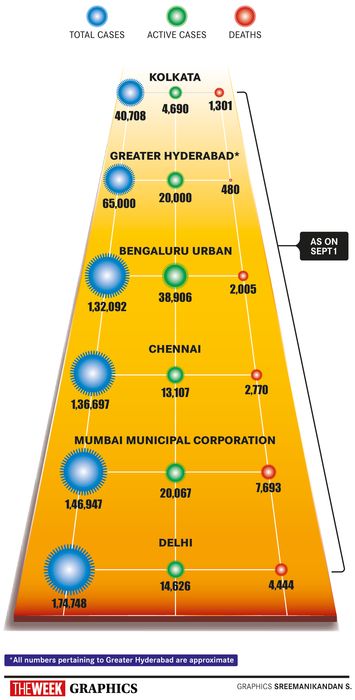 States that were able to use the lockdown to prepare their health systems are faring better, says Dr Giridhar R. Babu, professor and head, lifecourse epidemiology, Public Health Foundation of India (PHFI). But he adds that it is a misconception that any city has undertaken miraculous strategies, what with the basics being the same—testing, contact tracing, isolating and treating. The temporary plateau in a few cities could be attributed to the less movement of people, and as and when people step out, the cases would increase.

Both Babu and Kaur insist that a rise in cases is not a fact to be hidden or feared. “There is a perception that states that are reporting higher numbers are somehow not doing good. But increased numbers are only a function of enhanced testing. Focus has to be on reducing deaths,” says Babu. “Look at Andhra Pradesh, for instance, where a case fatality rate of 0.9 per cent has been reported. Once the sero-positivity results are out, this number will come down even further.” The Union government, too, has asked states with high case loads and deaths to bring down their case fatality rate under 1 per cent across all districts.

Following simple public health strategies has worked for some cities. For instance, Delhi, which opened up really fast, saw a rise in cases, but managed the situation with the home isolation model, providing people pulse oximeters and thermometers at home and monitoring their condition, says Dr K. Srinath Reddy, president, PHFI, who is part of the ICMR's task force for Covid-19.

Reddy says that testing, coupled with contact tracing, isolating, mask compliance and physical distancing, can alone let us live with a virus that is here to stay. “We need to test intelligently, given that sensitivity for RT-PCR tests is 60-65 per cent and for rapid antigen tests it is about 50 per cent,” he says. “The company that manufactures the RT-PCR test itself says that a negative test does not mean much. Which is why clinical investigation such as chest CT scans and monitoring for symptoms is important.”

Strict measures such as enforcing lockdown and current strategies of testing and isolation have failed, says Dr Jayaprakash Muliyil, former principal and head of the department of community health, CMC, Vellore. “This is a disease of the elderly, causing high mortality among those over 60. Those aged less than 50 are by and large affected mildly. The focus has to be on protecting the vulnerable,” he says. “Instead what some states did initially was to admit even those with sub-clinical infection. That did not help and in some places even overwhelmed the systems.”

To deal with the virus effectively, the country has to incorporate certain strategies in its public health response, says Muliyil. “First, there has to be a change in attitude,” he says. “Instead of stigmatising those who have recovered, we need to understand that once infected, the recovered individual will have long-lasting immunity. This long-lasting immunity is also the reason why vaccines will work to protect against this disease.”

Muliyil says that both herd immunity by natural infection and immunity through vaccines will help in dealing with the disease. “Herd immunity varies: in some diseases such as measles it is 90 per cent, but in the case of influenza, it is 40 per cent. In the case of H1N1, once 40 per cent of the population got it, the disease disappeared for a year. A year later, with new births, that balance tilted and we saw fresh cases. Similarly, in this case by the time we reach that point, there will be a vaccine. So the scenario looks pretty positive,” he says.

In rural areas, the transmission would be slower, as they are not as crowded and are sparsely populated. Healthcare systems in smaller towns would need support in dealing with pneumonia and early management of severe cases.

“What is clear is that you cannot isolate human beings for too long in a bid to 'catch the virus',” says Muliyil. “There is a need to be honest about community transmission, about the protection of the vulnerable and the elderly, and the need to save lives. At this point, communities and local administration need to deal with the disease together, not in isolation or dictated by fear.”