Robotic devices are solving the hassle of disinfection 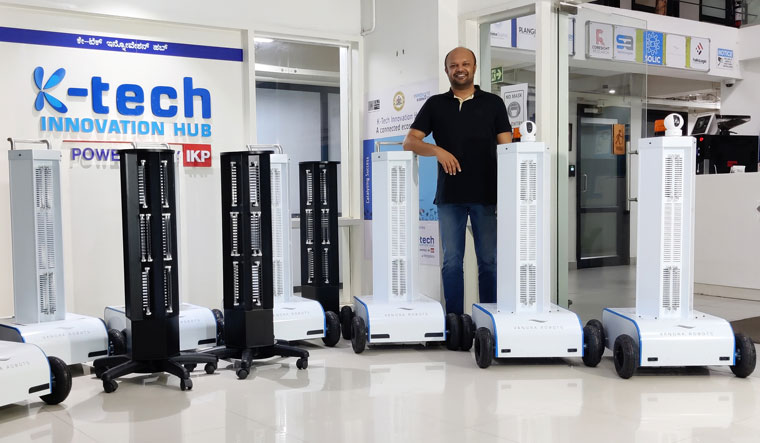 Man and the machine: Krishnan Nambiar, CEO and founder of Vanora Robots, with the UV robots

In April, Krishnan Nambiar, Mangaluru-based robotics engineer, got a call from the district hospital in Kasargod. The hospital was desperate for an efficient, unmanned device that could disinfect its premises, which was teeming with Covid-19 patients. Nambiar, CEO and founder of Vanora Robots, was in his hometown, Kanhangad, during the lockdown and took up the challenge. His team got into action, and in nine days, the hospital got a disinfecting robot that would disperse doses of type C ultraviolet (UVC) rays, which can destroy the cell structure of SARS-CoV-2 and a host of other pathogens.

The robotic platform developed by Nambiar’s team was lauded by his patrons as it provided a safe and cost-effective alternative to chemical disinfectants that were expensive, time-consuming to use and left behind a chemical residue.

“The hospital used to spend about Rs30,000 every day on personal protective equipment (PPE) to disinfect the wards,” said Nambiar. “But the robot made the process quick and safe as it works as a land-based drone, is agile and moves on specially designed wheels. It is remote controlled (with inbuilt camera and sensors) and can be operated by a technician. It runs on two car batteries.” Nambiar worked as an architect in Scotland before obtaining two masters degrees in robotics from England. After his return to India in 2015, he developed robotic platforms for filmmaking and inspections.

“The challenge was to devise a technology to disinfect rooms and surfaces while keeping the UVC light within safety levels as overexposure can be dangerous,” said Nambiar. “Our platform has UV controllers that work on artificial intelligence.” Vanora Robots is roping in local artisans and fabricators for its product development and production.

“Our UV robot was priced at Rs3 lakh, as it had expensive components,” said Nambiar. “By chipping off some of the components, we were also able to develop an affordable model—a robotic tower, which is mobile but not remote controlled. The unit can dispense pre-determined doses of UVC rays in an area marked for disinfection. We began to provide disinfecting services to homes and offices with the UV tower. We also came up with a UV chamber to disinfect keys, files, parcels and documents.”

Disinfection will be a key requirement at schools, colleges, hospitals, metro stations, supermarkets, gyms and homes in the days to come. And UV technology has been a saviour of sorts to meet this need. Nambiar says that the UV chamber is being used to disinfect suitcases and files of VVIP guests in seconds. An eye hospital in Udupi is using UVC in operation theatres—instead of chemical fumigation—after every procedure so that more surgeries can be performed in a day.

“UV towers weigh less than 10 kilos,” said Nambiar. “Cinema halls can save time [by using these] and have more screenings. The UV chambers come handy in schools to disinfect schoolbags, at check posts and police stations that scrutinise documents, and at apartment complexes when receiving parcels.”