Trump is badly bruised by the protests and the pandemic, but trust him to fight hard 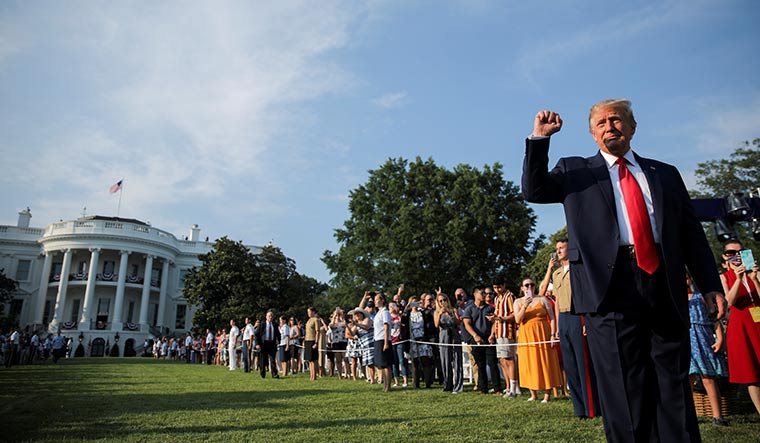 Aces up his sleeve: Donald Trump on the White House South Lawn to celebrate US Independence Day on July 4 | Reuters

SEVENTY-TWO YEARS ago, when America went to the polls to elect its president, Republican nominee Thomas Dewey was the odds-on favourite. Back then, opinion polls were a novelty, and all of them had given Dewey a double digit lead over Democratic candidate Harry S. Truman, who had succeeded Franklin D. Roosevelt as president after his unexpected death while in office. Dewey’s advantage appeared so obvious and overwhelming that even before all the votes were counted, the Chicago Tribune published an early edition with a banner headline, “Dewey defeats Truman”. But when the counting was over, Truman won with 303 electoral votes against Dewey's 189.

At this point in his reelection campaign, President Donald Trump hopes he can emulate Truman. The Covid-19 pandemic and the ‘Black Lives Matter’ campaign have eroded Trump’s approval ratings. Most opinion polls now give the Democratic candidate Joe Biden a double-digit edge. He is ahead in Pennsylvania, Michigan and Wisconsin, the key to Trump's unexpected triumph in 2016. The president is also trailing in Florida and Arizona, and he could even lose Texas, which the Democrats won last in 1976. His political rally on June 21 at Tulsa, Oklahoma, the first such campaign event after the pandemic struck, was a disaster. Despite claims that millions were waiting for a ticket, only about 6,000 people showed up.

Four months ago, Trump was leading a buoyant economy with unemployment rates at a half-century low. Now, his chances rest on the possibility of a quick economic recovery after strict lockdown measures are withdrawn. “A bumper third quarter recovery will help Trump sell himself as the leader who can put the US economy back on track once again,” says Joshy M. Paul, international relations expert at the Delhi-based Centre for Air Power Studies. “Even now, Americans trust Trump more than Biden on economic issues.”

Moreover, there is still time for Trump to turn the Covid-19 crisis into an opportunity. He enjoys the advantages of the bully pulpit and is certain to take credit whenever Covid numbers start coming down. He could even ask the Food and Drug Administration (FDA) to fast track regulatory approval for a vaccine. A dramatic launch of a vaccine could be the critical boost the president is looking at.

A low-hanging fruit for the Trump campaign would be to viciously target Biden and his family. Trump will certainly try to define Biden for the voters as a sloppy, senile loudmouth, who is close to China. The nickname “Sleepy Joe” seems to be sticking. Trump is also likely to go after Biden’s son Hunter and his $6,00,000-a-year gig at an Ukrainian energy company at a time his father was overseeing Barack Obama’s Ukraine policy.

Biden is known to be gaffe-prone. So far, he has been spared the intense scrutiny experienced by presidential candidates as he has been confined to his Delaware home because of the pandemic. But once the campaign gathers steam, there is a possibility that he may slip up. The Trump team is already pushing for more debates, hoping that Biden may embarrass himself.

“Trump should focus on Biden’s vulnerabilities,” says James E. Campbell, who teaches at State University of New York at Buffalo. “Biden has been nearly absent from the campaign. Many voters have given him a pass since attention has not been focused on his liabilities. Trump should make the point that Biden’s mental capabilities have slipped over the years and that he would be controlled by the very dangerous and radical elements of his party.”

Trump enjoys yet another advantage over Biden in the form of complete command over his party and absolute loyalty from his base. Among Democrats, supporters of Senators Bernie Sanders and Elizabeth Warren are yet to warm up to Biden. “There is the possibility of hardcore Sanders and Warren supporters staying home on election day,” says Paul. “Unfortunately for Biden, he does not command the absolute loyalty of a base. Moreover, he has not yet been able to fully enthuse the Obama coalition of the young and the Afro Americans.” It is, therefore, not surprising that the same polls which show Biden leading Trump by nearly 10 points nationally show that his base is less passionate about him than the Republicans are about Trump.

And, Trump has more aces up his sleeve to keep his base excited. Using the Covid-induced economic crisis as a ruse, he has imposed massive curbs on immigration, suspending green cards and other major visa classes like H-1B, H-2B and L till the end of the year. It has been one of the key demands of the Trump base. Trump is also likely to use the ‘Black Lives Matter’ campaign to drive political mileage. “His reaction to the movement has been to follow former president Richard Nixon’s playbook by invoking the virtues of ‘law and order’ and pushing for a forceful response to protests in a cynical effort to placate his electoral base,” says Graham G. Dodds, an expert on US presidential elections at Concordia University, Montreal, Canada.

There could be attempts to whip up anti-black sentiment among white voters, especially if violent protests break out, and it could increase further if Biden picks a black running mate. The strategy was evident during the Trump rally in Tulsa. “The unhinged left-wing mob is trying to vandalise our history, desecrate our monuments, tear down our statues, and persecute anyone who does not conform to their demands for absolute and total control,” said Trump. “They want to demolish our heritage.”

Democrats worry that the president could also facilitate voter suppression tactics, especially in key black areas. If blacks vote the way they did in 2012, Biden is likely to win. But the Covid pandemic poses serious challenges to the traditional voting system. The Democrats want to have extensive mail-in voting facilities; Trump and the Republican party are opposed to it. Pro-Democratic groups have been supporting lawsuits filed in at least 18 states to remove administrative restrictions that could hamper mail-in voting. Trump says mail-in ballots pose the biggest threat to his reelection prospects and will make 2020 the most rigged election in American history.

Democratic strategists are worried about other tactics such as voter intimidation outside polling booths, denial of funding to the US Postal Service which is in charge of delivering mail-in ballots and even the use of the pandemic as an excuse to keep voters away. “Trump’s reelection strategy appears to depend on cutting off channels for voters to have polling places and then sending operatives and right-wingers to intimidate and suppress voters in person,” Ben Wikler, chairman of Wisconsin’s Democratic party, told New York Magazine a few days ago.

Trump will also make a play for groups like Indian Americans who have forever been staunch Democratic voters. He is expected to use his friendship with Prime Minister Narendra Modi to draw their support. In contrast, the Biden campaign has been critical of Modi’s pet initiatives like the Citizenship (Amendment) Act and the abrogation of Article 370.

As the election day draws close, Trump could use foreign policy tools to boost his reelection bid. “A flare up of foreign threats through China or Iran is possible,” says Uma Purushothaman, an expert on American politics at the Central University of Kerala. A muscular foreign policy has always helped incumbent presidents. Trump may also benefit if countries like Russia and China launch cyberattacks to sabotage Democrats or try and help him with strategically timed favourable trade deals.

“It is no secret that presidents have more ability to act independently in the realm of foreign policy, and some have arguably used that ability for short-term political gain shortly before an election. Trump is not above such tactics,” says Dodds. Trump can also look at fast tracking the military drawdown in Afghanistan. He has already scaled down US military presence in Iraq and Syria and has reached an understanding with the Taliban, aimed at pulling out most US troops out of Afghanistan. “Trump could make a dramatic announcement of troop withdrawal just before the elections,” says Paul.

Despite the commanding lead enjoyed by Biden, the presidential race is by no means over. In July 1988, Democratic candidate Michael Dukakis had a 17-point lead over George H.W. Bush. Four months later, Bush swept the election, winning 40 of 50 states and 426 of 538 electoral votes. “Biden’s current lead in national polls is impressive. What, however, matters is not nationwide support, but rather which candidate wins which states in November,” says Dodds. “Trump can afford to lose some of the states he surprisingly won in 2016 and still win again, and just a slight change in people’s preferences could cause several states to go one way or the other. The race is far from over.” 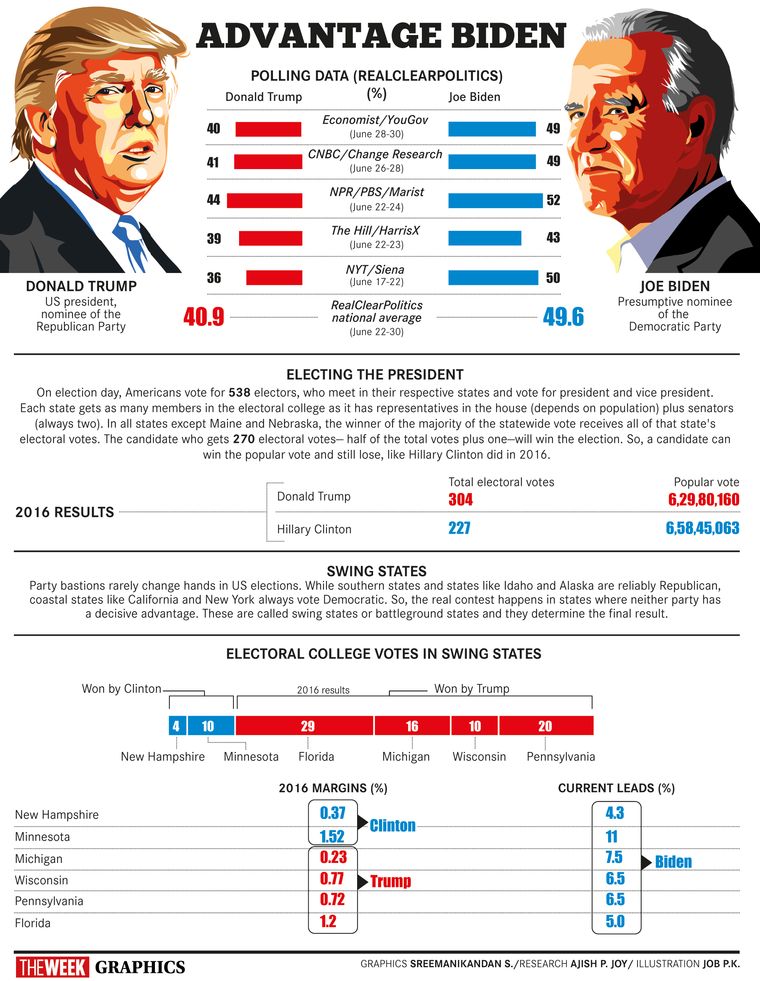