Delhi needs to put aside politics & fight the pandemic together 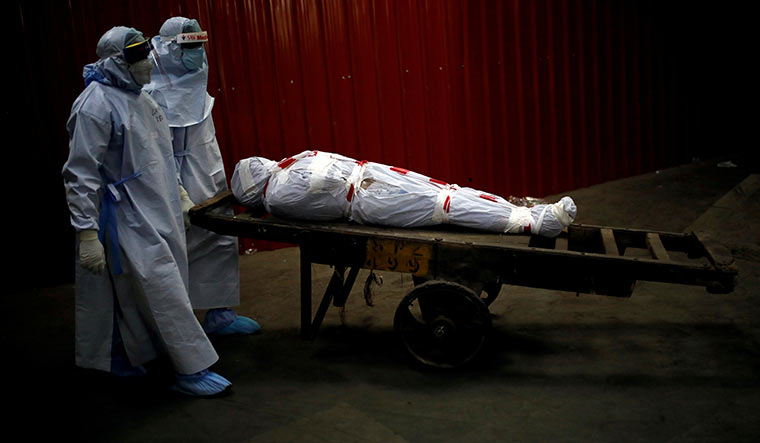 Last journey: Health workers take the body of a man who died of Covid-19 for cremation in Delhi | Reuters

A few months ago, Arvind Kejriwal and his Aam Aadmi Party had carefully negotiated the communal minefield set by the BJP, against the backdrop of the Citizenship (Amendment) Act, to record another spectacular victory in the Delhi elections. It was almost as dazzling a win as the 2015 victory, perhaps even more so, given the anti-incumbency.

However, Kejriwal did not have the luxury of easing into another term as chief minister. Communal riots shook the capital soon after he was sworn in and he was criticised for focusing more on optics and attempting a balancing act rather than dealing with the violence head-on. Then came the pandemic, which is proving to be an extreme test of Kejriwal’s leadership.

In the initial days of the outbreak, the focus was on the government’s ability to help those left stranded by the lockdown. The BJP had alleged that the AAP had a role to play in the exodus of migrants from the capital. There were also complaints about the distribution of free ration and food to the poor. On balance, the Kejriwal government was seen as having made an effort to feed and shelter those affected by the pandemic restrictions.

It has been a testing time for Kejriwal personally, too. He fell ill and had to be tested for Covid-19; it was negative. A much bigger test, however, lies ahead.

In the past three months, Kejriwal has addressed the people of Delhi with great regularity. Through ‘digital press conferences’, he has sought to convey his government’s preparedness to deal with Covid-19 and appealed to residents to stay indoors. He even prescribed reading the Gita to beat lockdown blues.

He then got people ready for relaxation in the lockdown, saying the city could not be perpetually locked in, and that there was an urgent need to restart economic activity.

Though there was a tinge of concern in his tone as he spoke of the recent rise in Covid-19 cases, he insisted that his government was two steps ahead of the virus.

As on June 9, Delhi had 31,309 cases and 905 deaths. It had registered more than a thousand cases daily for the past several days. According to the Delhi government’s estimates, the capital could even see as many as 5.5 lakh cases by July 31.

What is more worrying is that the city appears to have entered the community transmission stage, though this has not been officially declared. The Delhi government, however, has admitted that the source of infection is not known in 50 per cent of the cases. 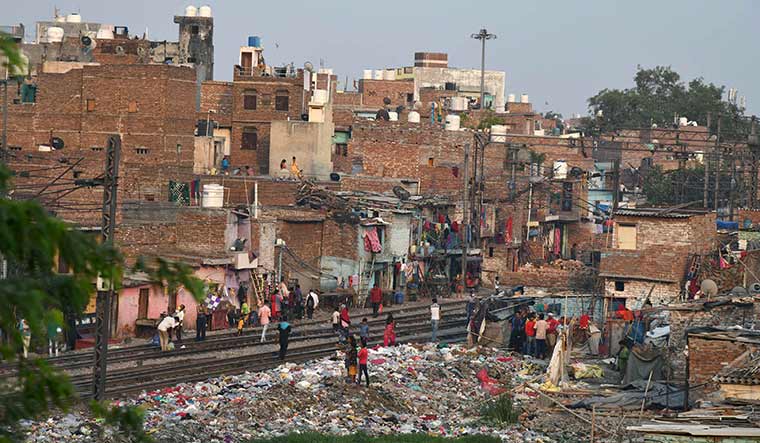 Living on the edge: The slums in Delhi are particularly vulnerable to Covid spread | Sanjay Ahlawat

Critics said the AAP government did not utilise the lockdown well enough to create treatment facilities. This, they said, was evident in the numerous reports of commoners’ ordeals. “On April 7, Arvind Kejriwal had said that 30,000 beds were being arranged and there was no need to panic,” said Delhi BJP leader Vijender Gupta. “Instead of using the lockdown to make arrangements, he indulged in a blame game, and then on May 30, he said his government would arrange 9,500 beds by June 5. He has clearly failed to create new facilities.”

Reportedly, when Kejriwal announced on May 30 that facilities would be ramped up, there were only around 2,800 beds (2,500 beds in Delhi government hospitals) available. This led to questions on why new facilities were not created during the lockdown.

Jasmine Shah, vice chairperson of the Dialogue and Development Commission of Delhi, said it was wrong to say that the government had not utilised the lockdown. “As the chief minister also said, the priority of the government during the lockdown was on expanding capacity,” he said. “When the lockdown began, 10 to 20 per cent of the beds had oxygen facility. Now, almost all the beds are equipped with oxygen. Health care staff was trained, PPE kits were arranged.”

Shah also said that the Delhi government ensured that the capacity of its hospitals was 50 per cent more than the current requirement. “The government had asked private hospitals to keep 20 per cent of their beds for Covid-19 patients,” he said. “But they took a lot of time doing that. And in the meantime, after the lockdown was relaxed, there was a surge in cases.”

“At this time, we have more than 8,500 beds in Delhi, of which around half are vacant,” said Delhi Health Minister Satyendar Jain. “In some private hospitals, there are no beds available. But there are no complaints so far of people not finding beds in Delhi government hospitals. We have enough beds for now. But we have to prepare for the coming days. Our target is to have 15,000-16,000 beds by the middle of June.”

He also slammed the Centre and municipal corporations for providing only 1,500 of more than 16,000 beds in facilities that come under them.

Kejriwal has also been criticised for his adversarial attitude towards private hospitals. He warned them against alleged black-marketing of beds, saying that he would not desist from taking action against them. The Delhi government then filed a complaint against Sir Ganga Ram Hospital, a leading private facility, for not using an app that is mandatory for Covid-19 facilities. The hospital was barred from conducting tests.

However, critics said Kejriwal was clashing with private hospitals at a time when he should be getting them to collaborate in the fight against the virus.

Another point of contention was the Delhi government’s decision, on June 8, to reserve beds exclusively for Delhi residents. The opposition said the move was insensitive, parochial and smacked of an attempt to divert attention from the government’s failure to create the required infrastructure.

“A large number of migrants do not have IDs,” said Indranil Mukhopadhyay, associate professor at the School of Government and Public Policy, Jindal Global University, and co-convener of Jan Swasthya Abhiyan.

“What about street dwellers? How will they prove they are Delhi residents? A large number of students come to Delhi from all over the country. Let us not discriminate against them. The entire NCR depends on Delhi for secondary and tertiary health care.”

On June 9, Lieutenant Governor Anil Baijal overturned the decision. The AAP said he did so under BJP pressure. “It is projected that by July 31, 80,000 beds will be required for only the people of Delhi,” said senior AAP leader Sanjay Singh. “In such a scenario, if the hospitals are thrown open for people from outside Delhi, [more than] two lakh beds will be required. When this question was put before the lieutenant governor, he had no answers.” Even in regular times, said AAP leaders, 50 per cent of patients in private hospitals and 70 per cent in government hospitals were from outside Delhi.

It was wrong to say that Kejriwal had lost the plot, argued his aides. They said he has been directly monitoring the arrangements, and a team stationed in the chief minister’s office has been constantly monitoring the status of beds and ventilators and the condition of patients who are serious. After he tested negative for the virus, Kejriwal announced that he would personally inspect stadiums and other facilities to arrange for additional beds and called for a jan andolan (people’s movement) to ensure that social distancing norms were practised. This was clearly aimed at conveying to the people that he was totally in control.

Currently, the government’s efforts to augment Covid-19 facilities includes a plan to take over stadiums, banquet halls and hotels. By June 15, the number of beds could increase by 2,000. A new 450-bed hospital is being built in Burari, on the border with Haryana. The government has also asked 22 private hospitals to reserve 20 per cent more beds for Covid-19 patients, which will add around 2,000 beds.

As of now, more than 14,500 people, who are asymptomatic or have mild symptoms, are in home isolation. This, said the government’s detractors, betrayed its lack of preparedness. Moreover, this system is fraught with danger as many areas in the capital are densely populated, with small, cramped houses.

The government, however, has defended the home-isolation arrangement, saying that a proper protocol was in place, and if there were patients who found it difficult to self-isolate in their homes, they were put up at the government’s Covid-19 care centres. 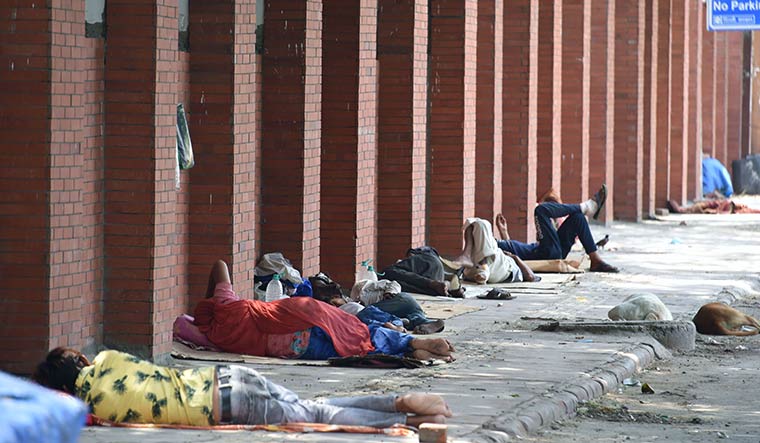 The AAP government has also been accused of being opaque about the Covid-19 death toll. The BJP and the Congress have accused the government of underreporting deaths. A plea regarding this was filed in the Delhi High Court in late May, but it was dismissed. The government countered the allegations, saying that the hospitals were not reporting deaths on time. Over the past several days, a corrective exercise has been visible in Delhi’s Covid-19 bulletins. The government has added additional deaths, which happened earlier, but were reviewed and deemed Covid-19 deaths by the death audit committee (formed on April 20) only later.

Another issue the Delhi government has been criticised for was the alleged low level of testing at a time when the virus was spreading fast. The government was also criticised for disallowing testing of asymptomatic persons, and it was argued that the decision to not test dead bodies, taken on June 2, would impact contact tracing and isolation efforts.

As many as six labs were issued notices for flouting the new testing norms. The charges against them included conducting tests on asymptomatic people and delaying test results. However, the lieutenant governor once again stepped in, overruling the Delhi government’s decision to not test asymptomatic patients. Now, the six labs have been allowed to test again.

“It is a myth that testing in Delhi has come down,” said Shah. “One needs to look beyond the past few days and take into account the overall context. States like Maharashtra and Gujarat, which are going through a grave crisis, are testing three to four times less than Delhi.”

According to the Delhi government, the capital is conducting 13,537 tests per million, compared with the national average of 3,531. The numbers for Maharashtra and Gujarat are 4,766 and 3,715, respectively.

Mukhopadhyay said that a more accurate indicator of the level of testing was how many tests per positive person were being conducted. This, he said, was 22 tests per person nationally. Karnataka carried out 100 tests per positive person, while the figure was 70 for Kerala. It was much lower in the states where the situation was more alarming, such as Maharashtra (seven), Gujarat (13) and Delhi (12.4), he said.

However, he supported the Delhi government’s policy of not testing asymptomatic persons. “It is really not fair to feed on fear and test people by charging them huge fees,” he said. “This is an extraordinary situation and a lot that is happening in the private sector is limiting our capacity to test and treat people.”

More importantly, amid the hectic politicking and the tussle between the Delhi government and the Centre, Kejriwal has struck a conciliatory note. On June 10, in his first public appearance after testing negative for the virus, he said, “If we fight among ourselves, corona will win. Till we do not collaborate, we will not be able to fight corona.”

Mukhopadhyay agreed. “Public health requires collective leadership,” he said. “A lot of planning happens at the level of local institutions. So, the municipal corporations have a big role to play. The Central government, too, has an important role in terms of providing adequate funds. While Kejriwal may have to take the blame for any failure of governance, the Centre and the local bodies also have accountability.”