India’s habit of taking Nepal for granted has backfired 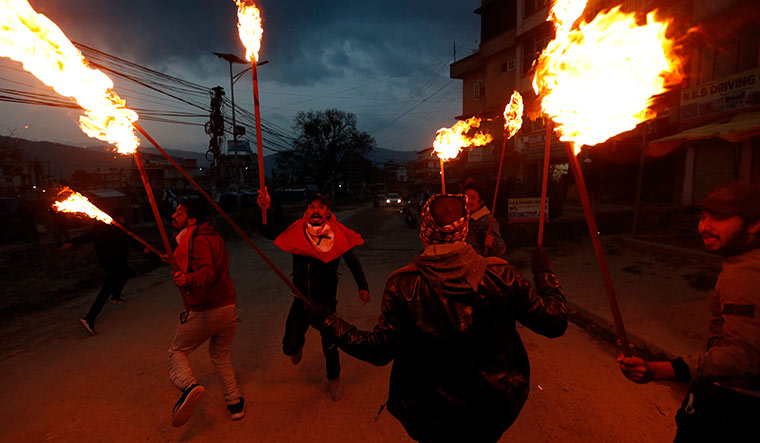 No compromise: Members of Nepal Student Union staging a protest against India inaugurating a road through the disputed territory | AP

India shares a 3,400-km border with China, mostly disputed. Of the 1,751-km border with Nepal, only two per cent is disputed. An even smaller portion of this disputed border has strained bilateral ties lately, so badly that Nepal released a new map, showing parts of Indian territory as its own, even threatening a constitutional amendment to ratify the map. It subsequently cooled down the map debate.

Meanwhile, its prime minister KP Sharma Oli takes nasty digs at India, terming the coronavirus strain in India deadlier than the Chinese one and wondering whether India’s motto was Satyamev or Simhamev Jayate (truth or might prevails?)

The dispute is largely over the definition of the Mahakali river, which The Treaty of Sugauli between British India and Nepal defined as the border. Mahakali originates from several streams, Nepal’s definition of which is to be termed its source is at the root of the dispute, which flares up periodically.

This time, however, the Nepal’s reaction is unprecedented. Some days ago, it made a big show of air dropping security personnel in the Kalapani area, a region it had left unpatrolled for decades. It pointed towards Indian troops in the area, which both sides know is because of China in the trijunction, and not Nepal. India’s new envoy to Kathmandu, Vinay Mohan Kwatra, was summoned to the foreign office to express their displeasure at the new road India built via Lipulekh to access Kailash Mansarovar. For an Indian envoy to be treated as such, is unheard of.

Discontent has been simmering ever since India released its new map on November 2, 2019, post the internal rejigging in Jammu and Kashmir. Nepal said India put the disputed territory within its boundary, though India says international borders remained as before. “There were heated discussions on Nepalese television channels on the subject and anti India protests, some politically pushed, many spontaneous,” recalls Major General (retd) Ashok Mehta, an expert on Nepal.

Within weeks, the Covid-19 pandemic overtook the world and the issue was on the backburner. But when, on May 8, Defence Minister Rajnath Singh inaugurated via videoconference, a 75-km road from Dharchula to Lipulekh near the Chinese border, Nepal saw red, claiming 19km of that road was through its sovereign territory.

Indian Army chief General M.M. Naravane’s allegation that Nepal is acting under pressure from a third country has done nothing to soothe ruffled feathers, though his reasoning was valid. “The Chinese ambassador to Nepal is overtly holding meetings with leaders of Nepal’s ruling coalition and opposition, something which was not done earlier,’’ says Mahendra P. Lama, Jawaharlal Nehru University professor and member of the Empowered Persons’ Group (EPG) set up to look into enhancing bilateral ties.

It is no secret that Oli and his Nepal Communist Party lean towards China. Oli’s history of engagement with India has always been strained. Things looked good for a while after Oli attended the March 15 virtual SAARC summit called by Prime Minister Narendra Modi on Covid-19. The summit was held barely days after Oli’s second kidney transplant. But his domestic political situation unravelled in May, and India provided the needed deflection. “He is a master at playing the ultranationalist card against India,” says Mehta.

India, however, has allowed Oli to get away, largely because of its habit of taking Nepal for granted. “This is not the Nepal of the 1970s, when the country’s elite were educated in India and the rest of the country had no access to communication. Today’s Nepal is well informed and exposed to the world,” says Lama. Nepal hasn’t forgotten being pulled up by India over its new constitution in 2015.

Bhiku Bahadur Thapa, the Nepal coordinator of the EPG, says India needs to understand its sensitivities. The EPG report, was finalised in mid-2018, but Modi has not yet given the group an appointment. “It was agreed that border talks would happen at the foreign secretary level, but the foreign secretary, too, has not given time,” says Thapa. India saying talks will happen after tackling the pandemic made Nepal feel slighted, given India’s overreach elsewhere in virtual diplomacy.

“The border issue is not such a big one, but when we have been telling India about the Kalapani issue since November, wouldn’t some consultation have been appropriate announcing a new road through the territory? Not just in parliament, civil society also feels slighted regularly by India,” says Deep Kumar Upadhyay, former Nepal envoy to India.

“Prolonging this dispute is bad for both of us, we have to lower temperatures,’’ says Thapa. India could make a gesture with receiving the EPG report, says Lama. “It does not have to be implemented; simply receiving it would be graceful, it was prepared at the behest of Modi and Oli.’’

India could also tackle the issue of Indian currency in Nepal that was rendered useless after the demonetisation drive of 2016. Importantly, India needs to understand that China’s growing influence in the Himalayan nation is to its detriment.

“We need a gesture from India, that it is willing for dialogue,” says Upadhyay. India had said Nepal needed to create the right environment for dialogue. Now that Nepal has toned down its map rhetoric, India is carefully monitoring the larger debate in Nepal on the issue. Boundary issues, says India, are sensitive by nature and need trust to be resolved to mutual satisfaction.

India resolved a much trickier boundary issue with Bangladesh some years ago, gracefully ceding 80 percent of the disputed 25,000 hectares in a complex delta landscape. Will India and Nepal let a rivulet jeopardise a unique relationship?