The road from Rome 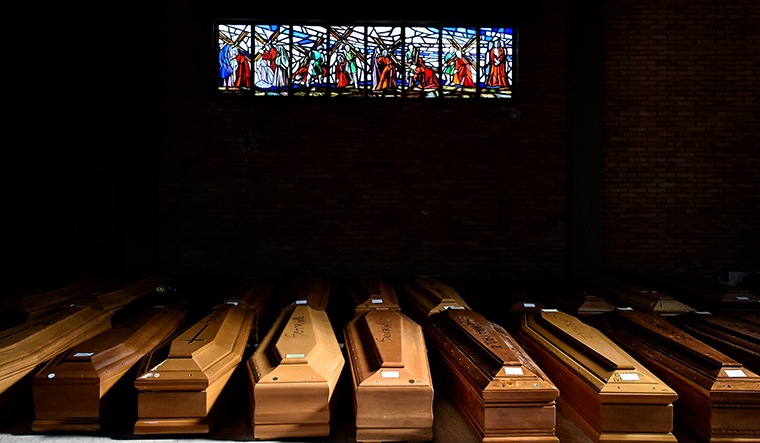 Final farewell: Coffins with bodies of those who died of Covid-19 at the church of the Serravalle Scrivia cemetery, in northern Italy, which has seen a high number of deaths | REUTERS

I have been working for years as a journalist in conflict zones, in Middle East and North Africa, following the destiny of millions of people migrating along dangerous and deadly routes.

I have seen corpses of dozens of ISIS fighters along the streets of Mosul in Iraq, bodies of civilians executed, with arms tied tied behind their backs and a single bullet mark on the head. I have seen bodies of children lying in the rubble, some with toys next to them.

I have met mothers and fathers who witnessed the murder of their sons in front of their eyes, or hung in the square of their villages. I have lived in proximity with death for job I have chosen to do in the recent years—covered wars against ISIS, civil conflicts in Libya, car bombings in Kabul, jihadists attacks in Tunisia, coup in Cairo, bombs on Gaza. And many more.

Every time I returned home in Italy to my family and my son, I clearly felt two things: that I was a privileged witness of the most extraordinary events of recent history, and that I was a lucky citizen of the protected part of the world. Every time I returned from a conflict area in the recent years, a question accompanied me—how the fear of bombs, the proximity of death and hunger, or more precisely war, can be told to those who have never lived it and therefore don't have a memory to evoke to comprehend it? This is why I worked on my language. I equipped my questions with new words to help people in Italy understand something they never lived.

Sometimes I succeeded, sometimes I failed. War is a strange monster to live in and tell.

This is why now that our life has been turned upside down by coronavirus, that every aspect of our life has been radically changed, when I hear about coronavirus described as a war, when I read or hear such a metaphor used in the headlines of news channel and newspapers, I become nervous.

Because I think it is another way to avoid hitting the focus of the problem. This metaphor highlights the limits of the use of our language in emergency situations. It doesn’t show us the limits and virtues of the health system of our countries. Neither does it describe the thing that scares us the most—the unpredictability of death.

I am now called to describe this phenomenon that I ignored until one month ago, and I have the responsibility as a citizen and journalist to be lucid and rational in front of the unknown.

But again, this is not war.

In just over a month, between February and March, I have been in Libya, in Tripoli, to cover the ongoing war and in the Greek islands of Lesbos and Samos, where 44 thousand migrants are blocked by containment policies of European countries, waiting their asylum request to be processed.

In the meantime, they live without a roof over their heads, without toilets, electricity, enough food and of course without doctors and access to health care. The scenario of a contagion there is an unimaginable tragedy.

When I landed in Rome on March 9, an entire column of flights at Fiumicino airport was canceled. The security controls more than doubled. Masks and gloves were everywhere. 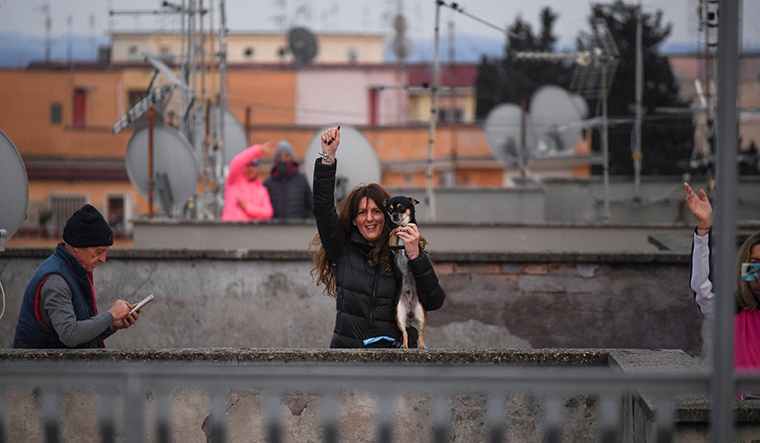 Lockdown jam: People listen to the music played by DJ Francesco Cellini from the terrace of his apartment building in Monteverde district of Rome | REUTERS

According to Istituto Superiore di Sanita (ISS) data, since the beginning of the epidemic, 4,824 health professionals were infected with coronavirus, equal to nine per cent of the total number of people infected.

According to Gimbe Foundation, this data is widely underestimated.

Fifty-two doctors from Havana arrived to help Italian doctors and nurses, they are members of the 'medical brigade' who also had experience against Ebola.

Since I returned from the Greek Islands two weeks ago, my government chaired by Prime Minister Giuseppe Conte has issued four decrees to contain the contagion, limiting travels, imposing lockdown of entire regions and finally stopping production of unnecessary things.

Since I came back from my trip, my son has stopped going to school. We have to stand in queue for groceries in front of the supermarket, keeping a distance of one metre, wear gloves and masks, wash hands with disinfectant multiple times, stopped seeing seeing my friends and colleagues and my uncle tested positive at COVID-19.

He has been in intensive care for eight days. He is 70 years old, lives with his wife —my aunt—in a small isolated village on the outskirts of Rome, one of those typical central Italian towns where everyone knows each other and the local doctor knows everyone by name.

"COVID-19 can't arrive here” everyone thought, while maintaining the cautions required by the government, by the mayors.

Yet it arrived. Because it is precisely like this—unpredictable, sneaky.

My uncle had a high fever for a few days. On the fifth day of fever, his doctor, alarmed and worried, but tragically unprepared for the turn of events he was forced to handle, requested an ambulance for a suspected COVID-19 case, activating a security protocol.

This means that in the middle of the night, doctors and nurses arrive with anti-contagion personal protective equipment, a white suit that covers them from head to toe and a mask covering the entire face.

Suddenly in the life of two pensioners, something more than an ambulance arrived.

It was 10.30pm on Saturday 14 March. At 5am next morning, my uncle was one of the 29 ICU patients in the Lazio region, the region in which we all live, although in different municipalities.

In a matter of hours, he was tested and was diagnosed with coronavirus.

The disease brings along one of the most undesirable situations—that of not being able to take care of our ailing loved one. Relatives cannot see the hospitalised patient, cannot hold his hand, say even if sedated and say “I love you".

Since that night, my aunt, my cousin and the rest of their family are forced into home isolation, but in two different homes. This means not being close to the patient – my uncle - and not being able to support each other.

In addition, they can't call anyone for updates. We spend the days waiting for a phone call and for the daily bulletin that the doctors of the hospital bring out.

For the next eight days, the phone call has had a single content, a single tone, attentive but inexorable: :he is stable but serious.”

We can't see him, we can't ease the pain of waiting. We cannot have information when we need it.

Meanwhile, on television the news from Piacenza tells of a crematory out of control—there are a hundred coffins piled up in the 'mourning and farewell room'.

There is no place enough. Too many dead, too fast.

As many as 314 people died in Piacenza since the beginning of the coronavirus outbreak, but the crematorium at its maximum capacity can handle 12-13 cremations per day while 20-25 coffins arrive there daily ever since the outbreak.

Since my uncle was hospitalized his whole family is isolated, someone leaves them groceries outside the gate of the houses, someone else throws their garbage; the time of waiting is consumed in long phone calls that every day have the same contents:

“How are you, do you have symptoms,” I ask to my aunt and cousin to be sure they have not been infected, knowing well that we are again in front of a paradox—relatives of a positive patient are isolated but not tested until they are symptomatic. It is the COVID-Catch 22 situation—being in home isolation with a positive relative in intensive care, but without being able to be tested. This would mean the possibility to be a positive but asymptomatic subject. Like the vast majority of people who contract the virus.

“No, no symptoms,” my cousin replies every day.

The second question in our daily call is:

“Worse and worse. I can't think of not seeing him dying.”

This emergency requires us to rethink our health system, possibly in a transnational way. To rethink our work, the daily life of our family and our social life.

In a tunnel where it is difficult to see the light.

There are no clearly distinguishable enemies.

Rather, there is a need to rethink citizens' health system in a new way, foreseeing what it will be, looking to the future with foresight.

In less than a month in Italy the enthusiasm for the rediscovery of the community is slowly turning into social anger and delusion.

Someone shouts from the balconies to those who run in the street, spying on the window who goes out and who is staying longer on the balcony.

Someone shouts 'murderer' to those who walk, as if they were looking for the infector, someone to blame for the virus, for contagion, for fear, for a future that has the dark color of uncertainty.

Our relationship with control and authority is radically changing, perhaps it will never return as before.

This isolation, this social distancing is necessary for the community, to avoid the collapse of the health system, to allow scientists time to find a vaccine.

And we do it, we live social distancing.

It is the challenge that we are called to overcome together.

Using the metaphor of war, of something that Europe does not know and cannot evoke and recall, takes us away from the problem and the problem is—are we ready to face this pandemic and the ones will inexorably come in the future?

How should we rethink our health care system?

This is not a war.

Our challenge, the most difficult to manage with COVID-19, is live far from our pain. Managing the distance of our infected loved ones.

Look at the face of death.

Caging the pain of those who remain at home isolated and cannot assist their loved ones can sow the grief of the future, even the social fractures.

People today cannot rationalize the impossibility of controlling such a sudden and pervasive contagion, and they cannot even create their own identity on a pain they are forbidden to go through and process.

And that great pain remains there as a dross that is not consumed, either over time or through nature.