Will Trump's India visit be high on hype but low on substance?

A cultural extravaganza awaits Donald Trump on his visit to India 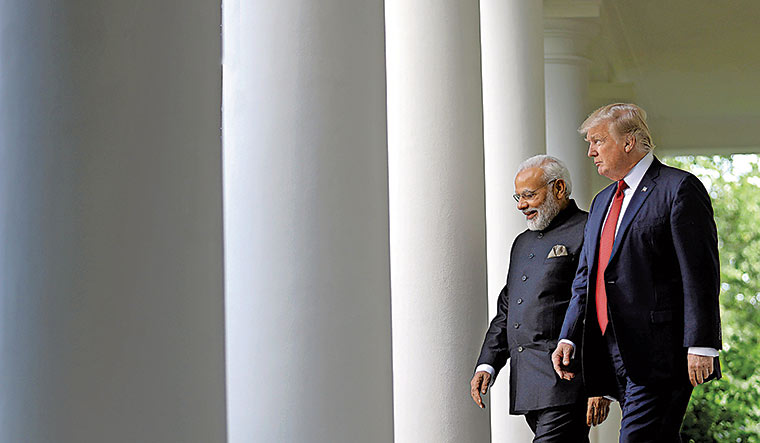 Donald Trump and Narendra Modi arrive for a joint news conference in the Rose Garden of the White House in June, 2017 | Reuters

US President Donald Trump should be in a good mood when he lands in India on February 24. The impeachment drama is behind him; even if his acquittal by the Republican-controlled Senate was a foregone conclusion, the Teflon-coated president must have found the scrappy process bruising. The US economy is booming, unemployment numbers are incredibly low, immigration is down and wages are up. Favourite Republican checkboxes—deregulation, tax cuts and judicial appointments—have been ticked off. China, hit by his aggressive trade policies and the 2019 novel coronavirus disease, is down for the moment; Iran is on the back foot with the dramatic killing of Qassem Soleimani; an Afghan deal that could pave the way for US withdrawal is in the offing; and the Israeli right as well as Trump’s evangelical Christian backers are thrilled with his Middle East plan, even if the Arabs and Palestinians are dismissive. To top it all, the Democrat challenge to his re-election in November has got off to a chaotic start.

Trump should be ready to appreciate the warm Indian welcome, huge crowds and colourful cultural extravaganza that await him. He relishes such occasions: his obsession with the numbers present at his inauguration, his exuberance after the French Bastille Day parade and his enthusiastic participation in the ‘Howdy, Modi!’ rally stand testimony to that. Sharing the stage with Prime Minister Narendra Modi, who will deftly maximise the moment at the Motera cricket stadium in front of his home crowd, will at least theoretically fit into Trump’s electoral calculus as it should impress the voters among the four-million-strong Indian-American community. The regulation photo with First Lady Melania in front of the Taj Mahal—this could be the first such photo with a thumbs up sign—will add soft romance to Trump’s image. Pomp and ceremony can serve a purpose beyond the photo opportunity: South Block would want the warm, fuzzy feeling created by the hype to rub off on the substance of the relationship. Bill Clinton’s 2000 visit—during which he was enthusiastically applauded by parliamentarians, danced with Rajasthani village women and saw India’s IT revolution first hand in Hyderabad—impacted positively on his appreciation of India.

The substance may not all be upfront. Too many expectations have been loaded on a trade deal that may not be forthcoming. It bears stressing that trade differences are inevitable in a broad relationship and are nothing new in the India-US context. The fact that Trump is unabashedly transactional, even with allies, and not chary of putting out snarky tweets has given trade a higher profile than usual and hogged the headlines, distorting public perceptions. The fact that India did not finesse some pending issues, like the wholly immaterial Harley-Davidson matter, before the Americans upped the ante, has not helped. While market access issues have solutions in sight, more conversations are obviously needed on complex matters of data localisation, e-commerce and digital payments. Clearly, there is no silver bullet for trade differences and we should be prepared for the long haul, particularly if Trump is re-elected. Meanwhile, it needs to be underlined that trade is actually on the increase and India’s positive trade balance is being whittled away with our increased imports of oil, gas and civilian aircraft. A whole-of-government approach is essential for us to diplomatically manage the trade relationship and ensure that this tail does not wag the dog.

That said, India would benefit by retaining focus on strengthening strategic convergences, a sphere in which the Trump administration has been largely positive, and keen to make common cause with us to counter China’s rise.

Three areas present themselves. First, defence and security relations. As a major defence partner of the US, India is now in the privileged category for technology access (STA-1); the enabling agreements since concluded have enhanced interoperability between our defence forces and opened up possibilities of Indian startups working with US defence and hi-tech industries; and exercises between the militaries have become increasingly complex. The multi-role helicopter deal expected to be finalised soon will highlight that India is keen on technology diversification with purchases from the US, even as it purchases Russian weapon systems. 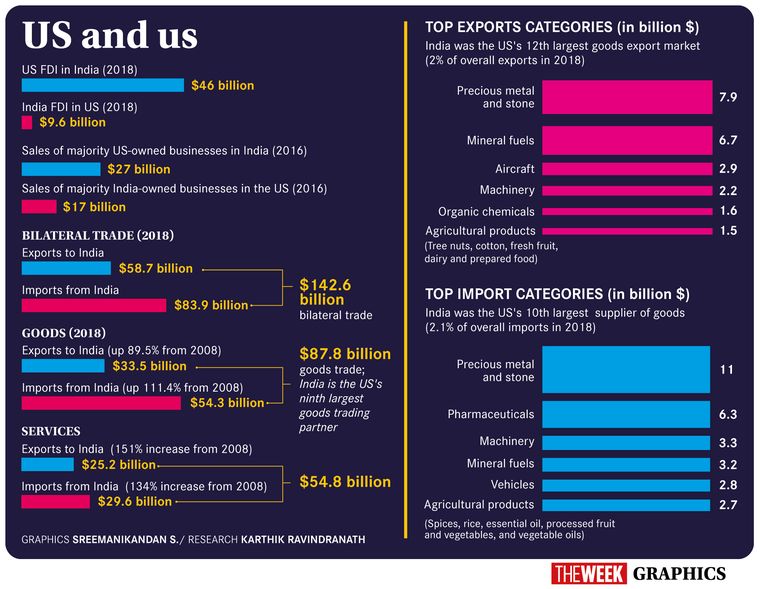 Second, the Trump administration has been supportive on counter-terrorism, particularly at the UN. The bilateral dialogue on designation of terrorists, which started after Modi’s 2017 visit, needs to be constantly fed to deliver tangible results. The lurking danger is of the US softening its line on Pakistan, including reinstating some military assistance, for its tactical objectives in Afghanistan. The visit is an occasion to drive home our concerns, highlight the dangers of mollycoddling Pakistan and point to our interests in Afghanistan.

Third, India is seen as a “pillar of democracy” in the Trump administration’s vision of a free and open Indo-Pacific. This, for all practical purposes, is the US’s answer to China’s powerplay and the Belt and Road Initiative in a region that is fast becoming the hub of energy and trade. While we may have limited wiggle room for military cooperation with the US in view of relations with Russia and China, engaging deeply with the US in infrastructure and connectivity projects is desirable; this could provide a more transparent and internationally acceptable paradigm to contrast with China’s “predatory economics”. The US has set aside $60 billion, including private capital, for such projects; an opportunity exists for dovetailing part of our work in the region into this rubric.

Trade deal or not, there is a substantive agenda to push during the visit of the POTUS even as he basks in the thunderous applause at Motera stadium.

Sarna was formerly India’s ambassador to the US and high commissioner to the UK.