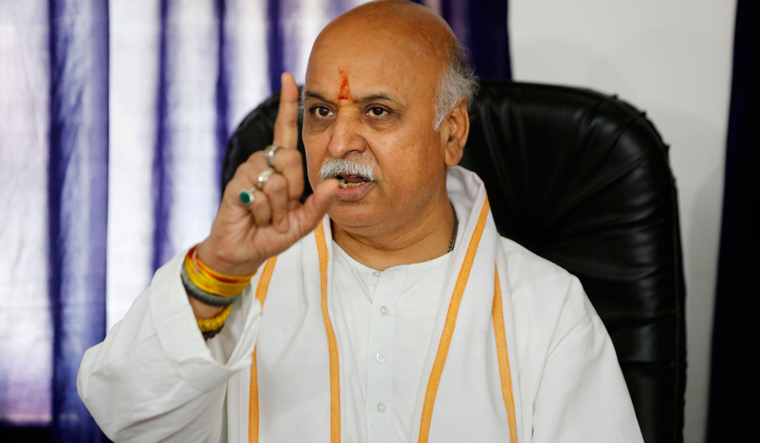 There were times when this cancer surgeon-turned-right-wing leader was at his fiery best. During the peak of Ram Janmabhoomi movement, Pravin Togadia closely worked with the then VHP president Ashok Singhal.

As the movement spread across India, there was an unsaid, unwritten competition between Narendra Modi and Pravin Togadia for the Hindu Hriday Samrat crown. The former won. Togadia, however, did not give up and as working international president of the VHP, he continued to up the pressure on the BJP-led NDA government for the Ram Temple.

The number of people from Gujarat, who joined the kar seva, was large as compared to other states and Togadia played an important role, taking the issue to the masses.

Over an year ago, the bitter power struggle within the larger Parivar reached its peak and it saw unceremonious exit of Togadia. With ties severed with the Parivar, 63-year-old Togadia floated Antarrashtriya Hindu Parishad (AHP).

Days after the Ayodhya verdict, Togadia, who is nursing his ailing 90-year-old mother in a hospital, spoke about the verdict, the road ahead, the role of the AHP, and more.

You played an important role in the Ram Temple movement. How does it feel now?

The Ram Temple movement with which I was associated right from beginning and sacrificed around 35 years of my life, led to fulfilment of the Hindu dream and resolution of 450 years to build the Ram Temple in Ayodhya. I am very happy. It was possible because of ishwar's (god's) blessings.

Please tell us about your role in the movement?

Ashok Singhal ji, Mahant Ramchandra Paramhans ji, Mahant Avaidyanath ji, I and many others took the message and the movement to billions of Hindus all over India and the world over. Earlier, it was limited only to Ayodhya and Uttar Pradesh. We together inspired and created Hindu unity beyond language, caste, and state. Until then, Indian polity was focused on minority appeasement and Hindu humiliation. We changed the direction of the thinking of the polity. We raised the resolve in India to stand up against separatist and Jihadist ideology.

Can you recall the highs and lows of the movement?

The high point was that what seemed impossible for 450 years suddenly happened in four hours when Babri structure fell. The low point was that the RSS and the BJP kept on promising that if there is majority in the Parliament, the law to build Ram Temple would be passed on the lines of Somnath Temple. Resolutions were passed, promises were given and this made Hindus come out of their homes, take bullets, die, quit all their worldly things like career, family, studies. This was the basis of the entire movement and umpteen sacrifices.

But, in 2014, they got the majority but this promise was not fulfilled and instead Triple Talaq Bill was passed. But law was not brought in for the Ram Temple. Even now, the temple would be built by the Supreme Court verdict, not by the government law as promised. I am happy for the temple but at the same time, broken promises caused so much losses to lives and livelihoods. It hurts.

When I started demanding the law, I was thrown out. Many were silenced this way. This diminishes credibility of the organisations and may impact the movement further as public realises that whatever is done by them is for votes and not as a commitment.

Do you think that the Ayodhya issue has been finally resolved?

Ayodhya dispute was not just for the construction. It was to defeat the separatist, Jihadist ideology. This aim is yet to be fulfilled in India. All over the world there is awakening. The ruling parties take different stand on these issues globally but in India, they again get into vote-bank politics of minority appeasement ignoring the dangers of separatism growing within.

Those who spearheaded the Ram Temple movement, those who made youths give up their lives, careers, families, now hug separatists like Jamiyat-e-Ulema-e-Hind. It is not only shocking but also a warning bell for the future generations. It sounds and looks good to say and project Sab Ka Saath, Sab Ka Vikaas, Sab Ka Vishwas. But everybody knows the ground reality.

Therefore, with the Supreme Court verdict, the Ram Temple would be built, albeit by ignoring those who gave their lives for the movement. But this is just a half of the resolve. Defeating separatist Jihadist ideologies is still pending and what is seen now, it would not be done soon. This is again putting India at risk.

The Ram Temple movement was for the temple and for Ram Rajya, too. That is, welfare of the poor, farmers, labourers, indigenous small traders, industries, increasing health and education facilities for the poor, and women's safety. What is seen in today's new India is obviously not in line with such a Ram Rajya. In the glittering shows and marathon foreign events, the basics of this nation are ignored. Farmers suicides; students, youth, women are facing injustice; big foreign businesses are welcomed; local industries and trades are scuttled. Laws are changed to suit the high and mighty, appeasement is at its high, health and education are expensive and unemployment has touched the sky. This is not Ram Rajya, surely. I am happy that Ram Temple will be built but by the time the real Ram Rajya comes in, perhaps it would be too late. It seems that the current rulers have not only given up that resolve but also kicked out those who gave up their lives for this resolve.

What about Kashi and Mathura now?

In 1984, in the first Dharma Sansad at New Delhi, a decision was made and a resolution was passed—freeing Kashi, Mathura and Ayodhya. This Dharma Sansad constituted a committee named 'Dharmasthaan Mukti Yagya Samiti', which was to free these three temples. But the current RSS chief [Mohan Bhagwat] has publicly and clearly said that they have nothing to do with Kashi and Mathura now. (It hurts Hindus, it is nothing but 'use and throw' kind of betrayal, but no further comments on this issue now. Ishwar (God) will provide justice.)

The Ram Janmabhoomi Temple movement helped in the rise of the BJP. Do you think that the BJP, as a political party, is going as per the agenda set by the Sangh Parivar?

It is not proper on my part to comment on the Parivar of which I am no more a part. But, as I was within the fold for 40 years, I can see what has been happening. Within the Parivar, there are organisations for different causes. Farmers, students, labourers, Hindus, Swadeshi.... The foundation seems to have transformed and become more personality-oriented and politics-focused. Or, maybe it has been that way and young minds were and are attracted with ideological, national, social sermons. Youths give their lives by getting brain-washed and indoctrinated. Where the party wins, most promises are either ignored or U-turns taken in the name of modernity and development. Therefore, at this stage, it is an interesting phenomena to watch whether the political outfit is following Parivar agenda or the other way round!