Ayodhya verdict offers a precedent to end other such disputes 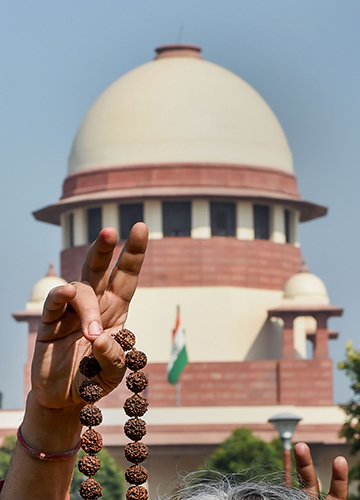 The Ayodhya judgment said that the law must stand apart from political contestations over history, ideology and religion. Yet, the landmark verdict has been critiqued on legal points.

Justice R.S. Sodhi, retired judge of the Delhi High Court, asked how the court had decreed the title in favour of Hindus when it had also given five acres to Muslims, holding “their dispossession as illegal”. Does that mean, asked Sodhi, that Muslims were in unlawful possession of the site? “And if they were, then why is land being given to them?” he added.

Muhammad Salim Engineer, vice president of Jamaat-e-Islami Hind, said that the apex court disregarded facts and ruled in favour of one community. The judgment said that on a balance of probabilities, the evidence supporting the claim of Hindus stood on a better footing than the evidence cited by Muslims. But Supreme Court advocate Gopal Sankaranarayanan said that the two sides were not asked to provide the same level of evidence.

S.Q.R. Ilyas, co-convenor of the Babri Masjid Action Committee, said that though the court said it will not decide on the basis of faith, it appears to have done that. “We submitted all relevant documents, from the grant made by the Mughal emperor to documents that detail the damage done to the mosque during the riots of 1934 and the repair work carried out by the administration,” he said. “What more was needed?”

It has to be seen whether the Muslim side will seek a review of the judgment. Those within the community who are against seeking review feel that Muslims need to accept the verdict in a dignified manner and close the matter. Said Engineer: “We had said before the verdict that we would accept the court’s decision. While we do not agree with the verdict, we respect it and accept it.” However, he added that a decision on whether to seek review will be taken at the meeting of the All India Muslim Personal Law Board on November 17. Those opposed to accepting the land say that it was not the plea. “Muslims should reject the offer of land,” said Ilyas. “It was made in mediatory efforts earlier. That was not the issue.”

Senior Supreme Court advocate Mahalakshmi Pavani said she was confident that the verdict has brought a sense of contentment to both the sides. “In any litigation, one party wins and one loses. The grant of five acres of land may not have been charity, but acknowledgement that the Muslim brethren will still have a mosque built to say their prayers,” said Pavani, who represented Ram Lalla in court in 2007.

The Muslim side emphasises that other disputes, such as Hindu claims with regard to Kashi and Mathura, should not be taken forward. They refer to the Places of Worship Act, 1991. The judgment, too, underlined the significance of the Act, saying that Parliament has mandated that history and its wrongs shall not be used as instruments to oppress the present and the future. That, at the very least, offers a precedent to end other such disputes.