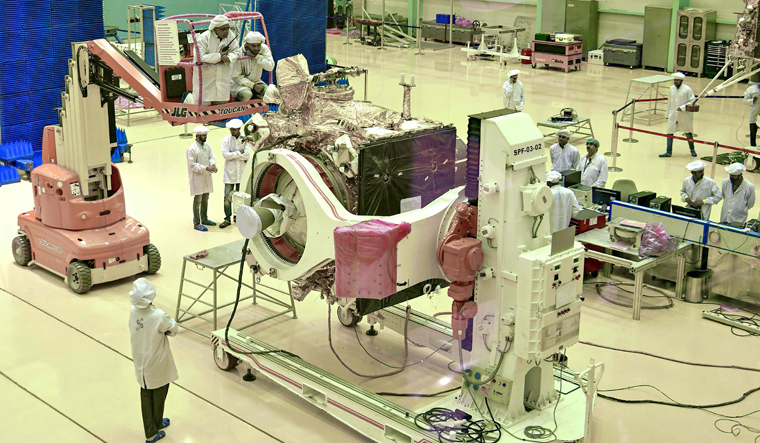 As the team of Indian Space Research Organisation (ISRO) scientists make efforts to communicate with the Chandrayaan-2 lander, Vikram, which lies on the lunar surface not very far from its actual landing site, there had been a lot of talk about the low costs of ISRO missions. The Chandrayaan-2 mission cost around Rs978 crore, which includes Rs603 crore for the orbiter, lander, rover, navigation and ground support network and Rs375 crore for the heavy GSLV rocket with indigenous cryogenic engine. This year, during the 2019-20 budget session, Finance Minister Nirmala Sitharaman allocated Rs12,473.26 crore to the department of space. This allocation includes the budget for Gaganyaan, India's maiden human space flight project.

Without compromising on the quality of material and resources, ISRO has been churning out successful missions despite limited budgets. Of course, ISRO has an advantage over NASA and other international space agencies in terms of low manpower costs and infrastructure running costs. “The cost of manpower that includes the salaries of the scientists and the cost of making a satellite and a spacecraft is much lower in India when compared to western countries. Most of the requirements are also outsourced to local manufacturers who provide finished material to ISRO to build satellites at less than half the price when compared to their foreign counterparts,” remarked Prof Jayant Murthy, director, Indian Institute of Astrophysics, Bengaluru.

Murthy feels that more international collaborations of ISRO with agencies such as NASA and JAXA (Japan) will further lower the overall mission costs as country will be able to complement each other with the technical know-how and skilled manpower. “Joint technology shared with each other will help. For instance, Japanese are excellent in probes of asteroids and comets. Though their lunar mission was not successful, they were able to bring samples from asteroids, which is remarkable. Indian can utilise prowess and keep their overall costs under control,” added Murthy.

Interestingly, the Special Electrical and Electronics Drives Division (SPEED) of Sona College of Technology, Salem, has been supplying different motors to ISRO at a fraction of cost than it would have had to spend in order to procure it from abroad. “Earlier, ISRO was procuring these motors from abroad for an average of Rs40 lakh per motor. They floated a tender and we are now providing them these motors for less than half the price. Our products were also used for the Chandrayaan-2 mission including fuel mixer motors that mix liquid oxygen with fuel, the Doppler mechanism for Vikram to guide the laser to ensure smooth landing on the moon and the robotic arm for Vikram for picking sand and rock samples from the moon. We have also been supplying ISRO with special purpose BLDC (Brushless DC) motors for satellites and rockets as well as lunar robots for many earlier space missions. All these are again at very low cost,” said Chocko Valliappa, vice chairman, Sona College of Technology.

Interestingly although Chandrayaan-2 is indigenous, a lot of components, sensors and the like, for which India does not have a base, are all imported. However, ISRO had done the overall assembly, integration and testing in India. Many experts point out that many ISRO missions by far are heavily technology-establishment focused and are also within given budgets. “Chandrayaan-1 attempted to put the spacecraft around the moon and the science payload that discovered water was from NASA. Technology-centric focus also means cost optimisation. The moment these technology foundations are established, like landing on the moon, India, too, can start doing heavily science-driven missions and discover many firsts in space science. But that will take more investment in putting out more state-of-the-art payloads,” said Narayan Prasad, co-founder and chief operations officer of Satsearch.

Bengaluru-based Ankit Fasteners Private Limited has been manufacturing aerospace fasteners for ISRO for more than 25 years. “While working with ISRO we have been able to develop manufacturing technologies, which has helped us to export similar products for global aviation and space applications. This has helped us increase the volumes under production thereby helping reduce manufacturing cost for ISRO and thereby the overall mission costs,” remarked Ankit Patel, CEO, Ankit Group.

Patel also pointed out that despite the material and assembly cost and low cost of labour, there are many factors responsible for ISRO's low-cost missions. “One must understand that to launch everything in space weight is the most important factor. It is also responsible for the overall cost of the mission. For instance, ISRO has many lightweight satellites whereas some NASA satellites are so heavy, they require powerful rockets to put them in the orbit. NASA makes huge investments towards those powerful rockets and also heavy-duty satellites. However one needs to see that complexities of each mission is different and they cannot be compared,” Patel told THE WEEK.

Patel further observed that even during the Chandrayaan-2 mission, ISRO was able to utilise its limited resources very efficiently. “In 1969, the Apollo 11 mission that took US astronauts to the moon took around 4 days to reach the moon. In comparison the Chandrayaan-2 mission took more than 40 days to reach the moon. NASA had used a very powerful rocket (Saturn V) that pushed the spacecraft and helped it escape the gravitational pull of the earth fast. In the Chandrayaan-2 mission, since the resources were limited, the continuous orbiting helped the spacecraft gain enough velocity and altitude to escape the earth’s gravitational pull and tread its way to the moon. It can be compared to a train and an air journey. Though the destination is the same, the latter takes less time due to the power of the aircraft and the air route. Since time was not the factor here the way the journey was undertaken is irrelevant. However with human space flights you cannot have this kind of long timeline,” observed Patel.

Experts such as Patel also feel that NASA and other international space agencies make huge investments towards having more testing facilities which though expensive helps in the overall success of the missions. “We need to have fully developed testing facilities. Though we do a lot of simulation we also need to pay more attention towards testing of spacecrafts that will help in the overall success of the mission. However all this will come at an added cost,” said Patel.

Experts also feel that given the paucity of funds many international space agencies are also aiming at tying up with many private companies that in turn will help in lowering the overall cost of different space missions. It is being observed that ISRO's tie-up with international space agencies and countries such as Japan and Russia will help in the sharing of costs and also help in R&D collaboration.

Space experts do believe that though missions by NASA and other international space agencies such as the ESA (European Space Agency) come at an added cost in the long term they also pave the way for more successful missions. “ISRO works on very tight and tiny budgets and as a result their spacecrafts carry less weight and fewer instruments compared to the heavy loads of NASA. As NASA has bigger budgets, their rockets are heavier and more powerful. Besides, their mission timelines are long. With longer timelines, they can collaborate, plan and allocate resources more easily. One thing needs to be observed is that sometimes it is not easy for science and space missions to work on strict timelines and deadlines as there is very little time to collaborate and allocate resources and puts pressure on the missions and that too with limited budgets,” said Rachana Reddy, a former space engineer of ISRO, who is now doing research on planetary missions at the German Aerospace Centre.

Reddy feels that longer timelines of missions help in designing better strategies and help in the successful execution of the missions. “India is currently working on multiple planetary missions which have timelines. It sometimes becomes difficult to switch manpower among these missions. If it is done, then the mission faces challenges. With limited resources besides the planetary missions, ISRO also has to manage different communication, navigation and other satellites. So there is a lot of pressure on ISRO. On the other hand, many of the international agencies due to better resource and financial allocation are able to experiment more. For instance, they will first send multiple missions looking at different aspects such as multiple orbiter missions before the lander and the rover mission to develop their expertise in certain aspects of a mission. In India, since the budgets are already constrained, they do not have the luxury to have multiple experimental missions to develop their expertise on a single aspect of a mission,” added Reddy.