Mafias are in check; gangsters are on the run 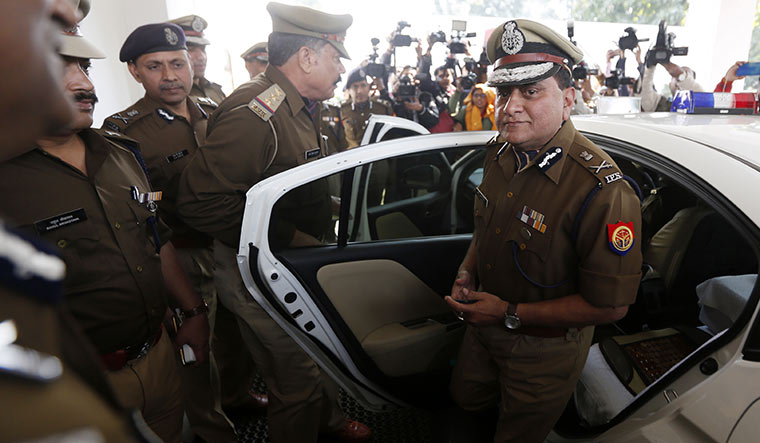 Om Prakash Singh says the BJP government’s decision to give free rein to the police has made Uttar Pradesh a role model for other states. He maintains that the allegation that the police are targeting minority communities is baseless, and that police encounters have helped eradicate organised crime in the state. Excerpts from an exclusive interview:

Q/ What are the main challenges for the police today?

A/ UP is no longer notorious for law and order. We have established the rule of law and firmly put law and order back on track. I can say with confidence and modesty that we have successfully liquidated organised crime in the state. Mafias are in check and gangsters are on the run.

The biggest challenge we face today is cyber crime, and developing the capacity and resources for tackling it. Secondly, improving traffic arrangements and road safety is a challenge. I have chalked out comprehensive plans to tackle it in the coming months. Thirdly, improving the behaviour of policemen remains a top priority. We have implemented a 360-degree strategy for their behavioural transformation, which involves a mix of training, giving motivation and changing their living and working conditions.

Crimes against girls and women continue to be a concern. Apart from taking legal measures, we wish to involve civil society to make our public spaces safer.

Q/ There is criticism over police encounters. How do you respond to it?

A/ UP Police have earlier been criticised for inaction; now the criticism is for taking action against criminals. We must remember that in a democratic country, we are working under a legal framework and are subjected to the highest scrutiny.

Each of our police engagements is subject to a mandatory magisterial inquiry and inquiries by the National Human Rights Commission. In each case, a mandatory report is sent to the NHRC with complete documents.

In the past two years, we lost the valuable lives of five of our policemen and 650 were injured. This itself underscores the fact that the encounters are real and that we put our lives in danger to uphold the rule of law. The criticism against encounters is squarely unfair.

Q/ Are police encounters a norm or an exception?

A/ Encounters are situational and a matter of last resort. We try our best to arrest the criminal or make him surrender. Even after giving this opportunity, if the criminal attacks policemen, they retaliate to the extent necessary.

Q/ Can we say the Yogi Adityanath government has given free rein to the police?

A/ By all means. This is the best working situation a police officer can ever dream of. There is absolute freedom to work, to make our own team. There is support from the chief minister and no political pressure.

Q/ There are allegations that minorities are being targeted in encounters.

A/ This allegation is unfair and unfounded. It is neither statistically proven nor a part of our strategy. For us, the religion or caste of a criminal is immaterial.

Q/ How do you rein in trigger-happy personnel?

A/ We have made it clear to all policemen [that they should] retaliate only when their own life is imperilled. If anyone is found breaking the law, they shall be dealt with under the purview of the law.

Q/ Why do you think UP has had the worst crime statistics over the years?

A/ UP is a victim of its own image. Most of the narrative around it is driven by hasty generalisations. The past two years have seen a marked improvement in curbing crime and ensuring law and order.

A/ Encounters are not done to change the reputation; they are not planned. The effort is to engage criminals and respond to the challenge bravely. Western UP has seen a marked improvement in public perception, as the team there has done a commendable job by tackling criminals head on.

Q/ How many criminals have been killed in police encounters since 2017?

Q/ How is the police-population ratio in UP?

Q/ How are you addressing technology- and training-related problems?

A/ In the last two years, UP Police have been making sustained efforts to enhance standards of policing by institutionalising technological initiatives. Employment of cutting-edge technology in forensics, emergency response, mobile apps, beat policing, investigation areas and training has been the main focus.

Q/ Financial crimes are on the rise in the national capital region, especially in Noida and Ghaziabad.

A/ Under the present government, Noida has become safe for investment. UP Police have broken the backbone of gangsters and mafias that were extorting money from the investors. With more and more investment pouring into the region, financial crimes might see a spike, but we have augmented our capacity to deal with cyber and financial crimes. We are setting up a state-of-the-art cyber hub in Noida in collaboration with the private sector and a cyber lab in Lucknow.

Q/ Under the Yogi government, cow vigilantism has become a menace. How are the police handling it?

A/ We have issued repeated circulars to district superintendents to take legal action against anyone who takes law into their hands. Wherever such incidents have come to notice, strict action was taken. Vigilantism of any kind will not be tolerated.

Q/ Is the police cooperating with human rights bodies like NHRC, which is inquiring into several cases of police encounters?

A/ We fully respect the authority of law and constitutional bodies like NHRC. We have robust internal scrutiny mechanisms to ensure accountability of our actions. In every encounter, we mandatorily send a report to NHRC in 24 hours. On NHRC’s instructions, we get inquiries done by an independent wing of UP Police—the crime branch crime investigation department. The CBCID has not spared policemen who have been found guilty. It has registered cases and charge-sheeted them.