Winter will be long

For its plan in J&K to succeed, the Modi govt will have to generate trust 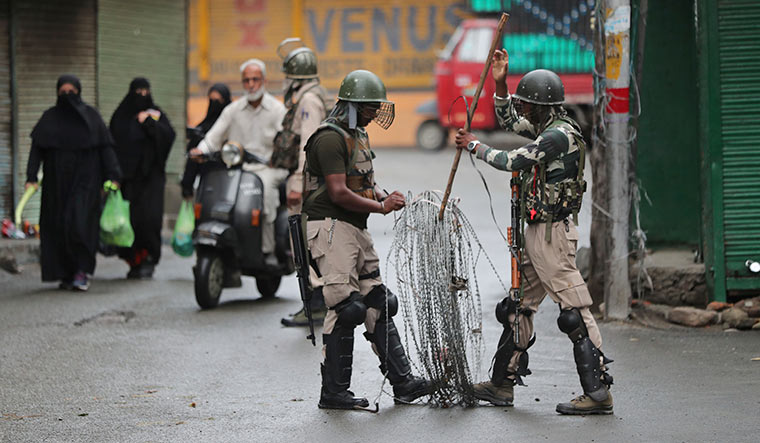 Valley of fear: Soldiers close off a street in Srinagar. Despite stringent security measures, protests are spreading in Jammu and Kashmir | AP

We are stocking up essential items for the winter. There is uncertainty and we need to be prepared,’’ said 31-year-old Jehangir as he was purchasing soaps, medicines, milk powder and eatables, a few days before the Union government revoked the special status enjoyed by Jammu and Kashmir. Jehangir had a lucrative job in Delhi. He gave that up five years ago to return to Kishtwar, his hometown, where he got married and settled down. Homecoming was not easy for Jehangir, with life in Kashmir being under the shadow of terror, mistrust and unrest, accentuated by long winters which always bring isolation and uncertainty. After the Modi government’s decision to bifurcate the state and revoke its special status, this winter may turn out to be longer and harsher.

There is disquiet on the streets once again. The situation is unprecedented as the unease is caused by the government’s decision to shut down the state to prevent civil unrest. The restrictions are being lifted gradually, but the tension is palpable. There is heavy military buildup on the Pakistani side. ‘’It is like the lull before the storm,’’ said a security official monitoring the situation. There is fear that the militants could use the winter to regroup and prepare for a full blown offensive in the summer.

The winter test for the government has already begun, with the date for the bifurcation of the state into the Union territories of Jammu and Kashmir and Ladakh being fixed as October 31. The date coincides with the period when Jammu and Kashmir officially declares the onset of winter by shifting the state secretariat from the summer capital of Srinagar to the winter capital of Jammu.

This time, the secretariat in Srinagar will close on October 25, and will reopen in Jammu on November 4, when it will no longer be the administrative seat of the undivided state. ‘’The transformation will be slow, but steady,’’ said a senior official in Delhi. On October 31, the government will set in motion the reorganisation of the state through a division of assets including the bureaucracy, government offices, courts, schools and colleges, and will declare the capital cities of the new Union territories. The criminal jurisprudence system, too, will undergo a change with the Ranbir Penal Code being replaced by the Code of Criminal Procedure and the Indian Penal Code.

The government has got two months to roll out its roadmap, which will include short- and long-term goals to address immediate problems and chart out the future course. The first discussion on this roadmap took place on August 19, when national security adviser Ajit Doval met Union Home Minister Amit Shah and shared feedback about his interactions with local people. Jammu and Kashmir chief secretary B.V.R. Subrahmanyam, and governor’s advisers K.K. Sharma, K. Skandan and K. Vijay Kumar are also involved in assessing people’s grievances and suggesting confidence-building measures.

Government sources said a special assistance package was being considered to jumpstart developmental work in the two Union territories. The bigger challenge, however, would be to deliver on these promises that are closely intertwined with the government’s decision to treat the new Union territories at par with other states. The package is expected to focus on power projects for Jammu and Kashmir, solar projects for Ladakh, building of roads, railways and highways and health care facilities for women and children. 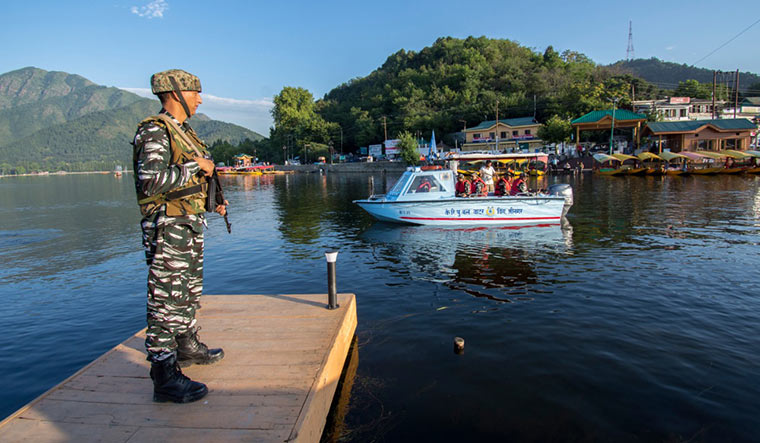 Back in 2015, Modi had announced a Rs80,000 crore package for Jammu and Kashmir, pledging to transform it into a modern, progressive and prosperous state. He had referred to former prime minister Atal Bihari Vajpayee’s doctrine of Kashmiriyat (the ethos of the Kashmiri people), jamhooriyat (democracy) and insaniyat (humanity). “I will follow these three mantras which are the pillars of development of Kashmir. Without Kashmiriyat, the idea of Hindustan is incomplete,” Modi had said while announcing the package. Four years later, while the territorial integration of Jammu and Kashmir is complete, the actual embrace is pending.

An official said the government would have to learn from its 2015 experience where delays and red-tapism marred the ambitious plans. In 2018, a parliamentary standing committee had noted that the progress of the package had suffered because of inadequate fund utilisation and delays. “This time the primary responsibility for the implementation of the special schemes will be with the Central government as both Union territories come directly under the control of the Centre,’’ said the official. At the moment, all developmental works stand stalled with the workforce in Jammu and Kashmir, largely hailing from Bihar and Uttar Pradesh, having gone home.

The challenges for the government are not just limited to the valley. The withdrawal of the special status and the bifurcation will have spillover effects in Kargil and Jammu where people are demanding the Central government’s attention. A tough job awaits the lieutenant governor of Ladakh, who is likely to have twin offices in the Buddhist-dominated Leh and the Muslim-majority Kargil in an effort to maintain the communal balance. While the Union territory of Jammu and Kashmir will have its own legislature, Ladakh will not have that privilege, and this has angered the residents of Kargil. 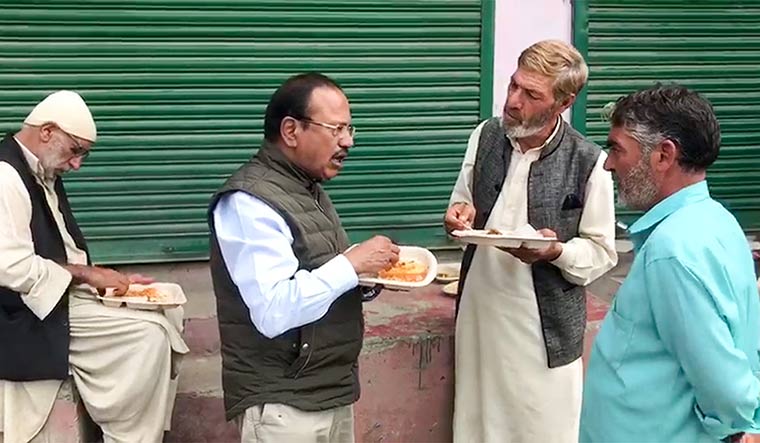 “Last summer, we had met the government’s Kashmir interlocutor Dineshwar Sharma and told him that we were opposed to any move that took away our rights as citizens of Jammu and Kashmir,” said Asgar Ali Karbalai, former MLA and chief executive councillor of the Ladakh Autonomous Hill Development Council. “How can the Centre abrogate Article 370 without consulting the people and take away our rights to have a state assembly? Why has Ladakh not been given a legislature similar to Jammu and Kashmir? It is unfortunate that the sacrifices of the locals in the Kargil war of 1999 have been forgotten,’’ he said. “We used to talk about Pakistan’s treatment of the people of Gilgit-Baltistan. Now what are we doing in Ladakh? We want the government to revoke its decision,’’ said Karbalai.

The government had dispatched Subrahmanyam to Ladakh to address the grievances of the local people. But they want representatives from Delhi to address their concerns. “What is the point talking to the chief secretary of Jammu and Kashmir when he does not represent the Union government? We demand either the Union home secretary or the cabinet secretary to come and talk to us,’’ said Karbalai. Subrahmanyam is said to have assured local leaders that he would deliver their message to Delhi.

Discontent is brewing in Jammu as well. The loss of statehood has created disquiet even among the local BJP leadership. Local leaders cutting across party lines have expressed concern about the move. “Does converting a state into a Union territory bring more development? If that is so, then why does the government not declare Uttar Pradesh or Bihar a Union territory?’’ asked Rakesh Wazir, president of the Hotel and Restaurant Association in Katra. “The fact is that not a single person has slept on the streets of Jammu and Kashmir or gone to bed hungry in so many years. The government should decide whether making it a Union territory and removing all special provisions will end unemployment or create more of it.’’ 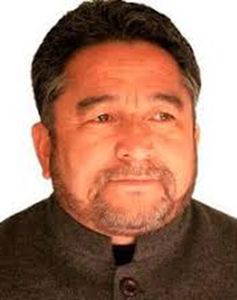 People are also sceptical of the government’s move to allow outsiders to buy land in Jammu and Kashmir. “The government needs to bring safeguards similar to the ones in Himachal Pradesh or the tribal areas of the northeast. Trade, tourism and commerce cannot be open to outsiders. Local businessmen and small traders will be hit by the huge influx of businessmen, especially from the neighbouring Punjab,’’ said Pankaj Dogra, working president of the district Congress committee in Kathua. “Kathua is the gateway to Jammu and Kashmir. Small shopkeepers in Kathua, Samba, Udhampur and other border areas will face the danger of unemployment as their business will be hit. Moreover, job concessions enjoyed by Jammu and Kashmir residents, especially the Dogras, will be affected if they are treated at par with people from other parts of the country.’’

The Modi government’s strategy appears to have factored in all the concerns, while keeping the larger goal in mind. A senior government functionary said the strategy was to change the discourse from azadi to a demand for statehood for Jammu and Kashmir and issues like preservation of people’s rights. The government has already started back-pedalling on these issues saying that the people’s rights over land will be preserved and that the demand for statehood will be considered. The first message, in fact, came from Shah while speaking in Parliament on August 5. “Full state status will be restored to Jammu and Kashmir at an appropriate time, when normalcy returns,’’ said Shah.

The caveat of “normalcy’’ means that regional political parties, separatists and disgruntled elements need to come to the talking table. “The people have started talking about statehood. Once peace and normalcy is restored, the demand can be considered,” said an official. The government may also introduce requisite checks and balances to address concerns of land rights, trade and investment by giving preference to locals. As part of immediate confidence-building measures, an investor’s summit has been scheduled in October in which major industrial groups are expected to unveil investment ideas in sectors like hospitality, pharmaceuticals, agro-processing and health care. The summit, likely to be inaugurated by Modi, has attracted the attention of business tycoons like Mukesh Ambani, who have pledged their support to the people of Jammu and Kashmir and Ladakh.

The real test of the government’s strategy will take place during the assembly elections. BJP strategists are said to be examining the possibility of redrawing constituencies to increase the number of seats in Jammu. For its plans to succeed, the government will first need to create an atmosphere of trust and remove the heavy restrictions imposed on the movement of people. A prolonged lockdown will adversely impact new projects and businesses. Not just the average businessman or the tourist, but even workers from different parts of the country will be reluctant to go there.

On the security front, the government is walking a thin line. In the eventuality of a terrorist strike on the lines of Pulwama, will India respond with another Balakot? This is a question the security establishment keeps asking itself even as the government works overtime to restore peace in the region this winter. Despite the stringent shutdown, protests are spreading. Sources said nearly 25 to 30 protest demonstrations were being reported daily, although most of them were small, with about 15 to 20 people taking part. Some of the bigger protests have attracted nearly 100 to 120 people.

Across the border, Pakistan is keeping itself prepared for a confrontation after having learnt its lessons from Balakot. Islamabad may have chosen the cheaper and favourite option of using non-state actors to launch terror attacks in Jammu and Kashmir in the coming months. “A low-cost war will mean sending a handful of fidayeen into the trouble-torn areas,” said a security official. “We will remain alert to such threats.”