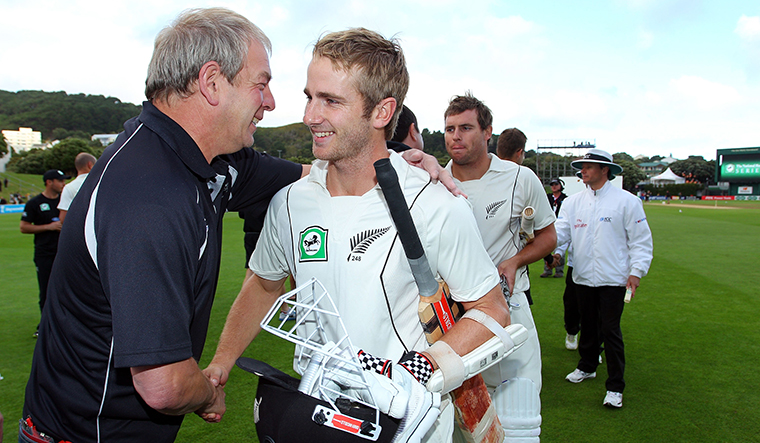 One for the ages: Williamson leaves the field after day five of the 2012 Test match against South Africa in Wellington. His 102 in the match is considered one of the finest Innings by a New Zealander | Getty Images

Long before Kane Stuart Williamson became the darling of the cricketing world, long before the fateful World Cup final, Jofra Archer had called it. “Nice guys finish 2nd,” the English pacer had tweeted in 2013. Among all of Archer’s old tweets that the twitterati were able to dig out and give context to at this World Cup, none seemed more fitting. The 28-year-old nice guy from the coastal city of Tarangua had to settle for the second place.

Williamson was born in 1990, minutes before his twin brother, Logan, to a family that loved sports. His father was a club cricket player, his mother played basketball at the university level and his three elder sisters played volleyball at different levels. Little is known about Logan, who was into sports but chose to be an accountant.

The boys played rugby, volleyball, basketball and football and quietly excelled in all of them. Kane’s childhood coaches remember his ability to amass runs at will while showing respect for the game and for opponents. Josh Syms, his school coach, once told a newspaper: “He had a thirst to be phenomenal, but not at anyone else’s expense. It was more ‘This is what I love, this is what I’m good at, so I’m going to do that’.” Another coach said that the boy would always compete with himself, not others.

He grew up idolising Jacques Kallis for his ability to bat at three or four and still be a good fast bowler. Trent Boult, Williamson’s weapon of choice in those final two overs against England, lived down the street. Pacer Doug Bracewell, his close buddy, once said that the only time Williamson was not batting, during inter-school tournaments, was when the coach, usually his father, retired him to give other kids a chance. He is said to have scored as many as 40 centuries for his school teams.

His nerves of steel were forged by playing with kids much older than him. The cricketing community in New Zealand considers his Test century against South Africa at Wellington in 2012 to be one of the finest ever by a New Zealander. The hosts had been reduced to 32 for three on the last day, with a target of 389 out of sight. All of 21, Williamson contributed 102 of the team’s score of 200 for six. It ensured a draw, leaving the fiery South African bowlers grinding their teeth.

Leadership came naturally to Williamson. He was head boy in his final year in school. And as he graduated through the age-group national sides, it became obvious to those around him that he would one day lead the senior side. And it has not been limited to just his national side. In the absence of David Warner in last season’s Indian Premier League, Williamson captained Sunrisers Hyderabad to the final and scored a massive 735 runs at a strike rate of 142.44 over the season.

It is this ability to single-handedly anchor innings, coupled with his phenomenal reading of the game as captain, that bolsters the parallels drawn between him and legendary Kiwi skipper Martin Crowe. Even Crowe, a year before his death, acknowledged the class of his successor in one of his finest pieces as a columnist. “What will Williamson display when the pressure is at boiling point? Certainty. That kind of composure is rare, not normal,” wrote Crowe in 2015.

While most New Zealand batsmen are taught not to leave the ball late, Crowe and Williamson weaponised the back foot defence. Williamson’s father taught his son to learn to play with both feet, after he read a cricket columnist’s piece that said that someday it would define the best from the rest in the world. A solid defence of the stumps, utilising the depth of the crease, and the ability to flick rising balls from the off-stump to third man are two traits that set him apart from his brothers in the current fab four club—Virat Kohli, Joe Root and Steve Smith. His Test average of 53.4 and ODI average of 47.9 are the best for any New Zealander who has played more than ten matches. His Test average since 2015 is 68.3; second only to Steve Smith’s 69.2.

Scoring 28 per cent of New Zealand’s 2019 World Cup runs and tactically outsmarting a rampant India with the shrewd deployment of pacers have been the latest reminders of Cricketer Kane’s prowess. Yet, it is his grounded nature and empathy that those around him find most endearing. Team manager Mike Sandle once said that on a Bangladesh tour Williamson was struck by the poverty around and would quietly make trips to help those he could. There is also the other instance of him donating his entire fee from the 2014 Pakistan series to families of the victims of the terror attack on a school in Peshawar.

Williamson has moulded the team under him in his own image and the players have, on multiple occasions, aired their admiration for their level-headed leader. After the turn of events in the final, few could have handled the volley of questions better than Williamson. No complaints, no excuses, no crying foul. A deeply hurt but smiling Williamson stopped short of defending the very rules that crushed his team’s hopes. Hailing from the land of the All Blacks rugby team, he is the toughest of them all. And also the softest.