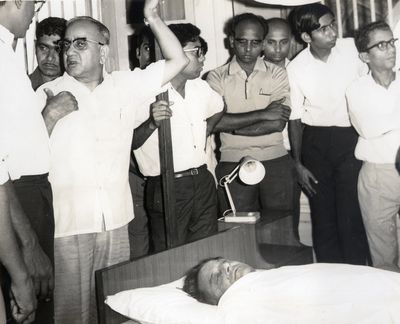 End of an era: Vikram Sarabhai’s body at the Halcyon Castle, Kovalam. TERLS director H.G.S. Murthy is seen gesturing to others.

December 30, 1971, Thiruvananthapuram: It was around breakfast time. Nadesha Paniker, a bellboy at the Halcyon Castle, Kovalam—a heritage hotel popularly known as Kovalam Palace—rang the doorbell of a suite. The guest was scientist Vikram Sarabhai, a regular who had always tipped Paniker generously.

On hearing no response from inside, Paniker got worried. He was familiar with the guest’s habits; it was unusual for Sarabhai to sleep this long. So he tried the door handle, but it was locked. Paniker went out to the balcony from where he could look into the room. Through the window, he saw Sarabhai on the bed, under the mosquito net.

Alarmed, he ran to inform the manager, who opened the door with a spare key. They found Sarabhai in bed with an open book on his chest. The manager asked the reception desk if there were any doctors among the guests. Dr K.C. Mammen, a paediatrician, was in the hotel for a family get-together. He was on the beach with his children when the hotel staff told him about the situation.

“They said Vikram Sarabhai was unwell, and requested me to come over and check him. But by the time I reached his room, he was dead,” Mammen, now in his late 80s, told THE WEEK. “The body was not cold, and the colour also did not suggest that he had died a long time before. Some of his acquaintances pressed his chest [to revive him]. I told them it was of no use.”

No autopsy was done. Sarabhai’s mother, Sarla Devi, had requested prime minister Indira Gandhi to omit the procedure. Amrita Shah’s biography of Sarabhai says that the 52-year-old scientist had been declared fit by his physician, Dr R.J. Vakil, just days before his death. Even on the evening before the fateful day, he did not show any signs of illness and had met a number of people at the hotel. Later, there were murmurs about an international plot behind his sudden and untimely death. 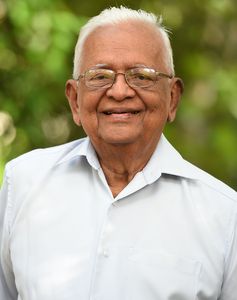 From Thiruvananthapuram, a special aircraft of the Indian Air Force flew the body to Bombay, where wife Mrinalini and daughter Mallika waited. Later, the body was taken to Ahmedabad and cremated at the Sarabhai family’s Kakrapar farm in Hansol village.

Kartikeya, Sarabhai’s son, could not make it home from the US in time. So Mallika broke tradition and lit the pyre. The ashes were later scattered in the sea at Thumba, close to the Thumba Equatorial Rocket Launch Station (TERLS), which Sarabhai had founded. TERLS was renamed as the Vikram Sarabhai Space Centre in his honour. In 1974, the International Astronomical Union named a moon crater after him. Now, as part of Chandrayaan-2, an Indian lander will go to the moon, carrying Sarabhai’s name and dream.