Finding 'Mohandas': A filmmaker's attempt to capture childhood of Gandhi 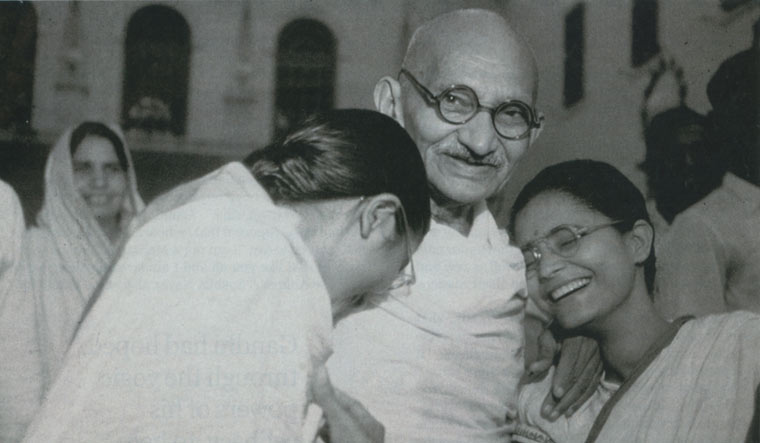 M.K. Gandhi with Manuben (Left) and Abha in Delhi

M.K. Gandhi continues to inspire generations of writers, playwrights, filmmakers, intellectuals and social scientists. But what perhaps has been missing is the factors that made Mohandas the highly revered Mahatma. Kannada filmmaker P. Sheshadri, an eight-times national award winner, is on a unique quest to fill in the gaps. His next work is 'Mohandas', a feature film on the childhood of Gandhi.

Sheshadri is planning to get the movie released on October 2 to coincide with the 150th birth anniversary of Gandhi.

Speaking to THE WEEK, the filmmaker shares his journey of rediscovering Gandhi’s childhood, as a researcher and storyteller. Gandhi remains an enigma, but this is an attempt to unravel 'Mohandas', the child, he says.

Many films have been made on Gandhi. How will yours be different?

As far as I know only two feature films have been made on Gandhi, which focus on the lawyer, politician, writer and freedom fighter Gandhi. Of course, there have been many documentary films. Gandhi came back from South Africa in 1915. It was the same period when Indian art and cinema were taking giant steps. Raja Harischandra—the first Indian feature film—was released in 1913. Art, literature, cinema, social reforms and politics of the country was undergoing transformation. So I see Gandhi as part and parcel of the cultural renaissance of this country. Gandhi was a powerful subject for filmmakers. But no one dared to do a biopic till Richard Attenborough filmed Gandhi in 1982.

Shyam Benegal's The Making of Mahatma (1996) was the second film, which was followed by Gandhi, my father (2007), which is a movie on Gandhi’s son Harilal. I wondered why there are not many feature films on Gandhi. Perhaps, Attenborough set a very high benchmark. I noticed most movies focused only on the period after Gandhi returned from South Africa. So, I decided to go in search of Mohandas, the little boy.

Your movie focuses only on the growing up years of Gandhi. Any specific reason for it?

Gandhi’s childhood was very important to understand him as a person. A few years ago, I came across a Kannada play written by Bolwar Mohammad Kunhi titled Paapu Gandhi Baapu aada Kathe (2011) – a story of how child Gandhi became the father of the nation. I found it very interesting as it dealt with Gandhi’s childhood. We all know very little about Gandhi as a child. But this book dramatised the events and this inspired me to make a movie. I felt this story is relevant for all the children across the world and perhaps to the parents too. If we recall our own childhood, we find many similar incidents. Each one of us have had our share of mischief and misadventures. What was different about Gandhi? How we grow with those experiences is crucial and that determines what you become.

What has been Gandhi’s influence on you?

I first heard about Gandhi when I was in high school. I heard his voice on radio and read a few lessons about him in school. There was a very vague sketch of his childhood. I only knew him as a Mahatma, his picture was on the Indian currency and we got a holiday on his birth anniversary. But first time I came “face-to-face” with Gandhi was when I watched Gandhi in 1983 during a special screening at my village Dandina Shivira in Tumkur. I was mesmerised. My father, a schoolteacher, told me stories about Gandhi. It left an indelible mark on my mind.

All your earlier movies focus on social issues. Why did you choose to make a biopic on Gandhi after so many years?

For today’s children, Gandhi is a superhuman. Mahatma Gandhi is relegated to a few pages in a text book. I feel we have forgotten that the father of our nation was not just a catalyst for Independence but also a role model and heralded the Indian value system. He chose truth and non-violence above anything else even as a child. I asked many children what they knew about Gandhi. They did not know much as even the textbooks have done away with the lesson on Gandhi too. Not many children would have read the books like 'The Story of My Experiments with Truth'. So, I felt a movie can be an effective medium to reach the young minds.

What are the challenges in making this film?

There is little information about his childhood because none of his childhood friends, siblings or teachers have penned any book. His autobiography is the only main source. But only the first 28 pages are related to his childhood. I managed to get a few books from Sabarmati Ashram. This dearth of information can hamper the periodic film as we are trying to recreate the period before 1900. Moreover, Gandhi being who he is, we cannot take too much of creative liberty. The letter he wrote to his father is a very important document for my film as it helped me get closer to being authentic. In India, a major challenge is also the budget as not many want to produce biopics, and choosing the canvas for the film, depending on who my audience would be, is critical. For this film, I had to fall back on friends and family to fund it.

How is this film different from all your other films?

I worked as a journalist before I took up cinema as my career. So, the choice of subjects for my movies are drawn from the social issues and are realistic. The Indian society has complex issues compared with the Western world. Gandhi will be my first historical movie. It will be challenging as Gandhi is a well known personality and any work based in his life will be closely scrutinised. I cannot take too much of creative liberty with this film.

What is the source of information for your narration considering there is very little information available?

I visited Rajkot in 2016, I found it difficult to find the house where Gandhi was born as

no one knew. Later, the local cops told me it was known as “Kaba Gandhi no dhole” (the house where Mahatma Gandhi’s father Karamchand, the Dewan of Jetwa Rajput kings of Porbandar lived). Three months back I went to Rajkot again. I visited Alfred High School (earlier known as Kathiawada high school), where Gandhi studied from the age of 6 to 13. The school has been converted into a museum by the state government at a cost of Rs 22 crore.

In Porbandar, the ancestral home of Gandhi (now Kirti Mandir) is being maintained by Archaeological Survey of India. I had imagined that Porbandar would have many Gandhians. But I met just one - Narotthambhai Palan. I could hardly find person or resource who could unravel Gandhi's childhood years. My quest continued as I wanted to get the authentic attire, the school uniform of those days, the bag, the book, the slate, the classroom, the furniture...in fact, everything about those times. I visited the Krishna temple which Gandhi frequented with his mother, Kastur Ba's house which was right behind Gandhi's house, and the primary school in Rajkot. Finally, the story board was ready.

Was Gandhi’s childhood any different?

Gandhi represents a value system that is worth emulating. He grew up listening to tales of Bhakta Prahallad who practised non-violence or Shravana Kumar who carried his blind parents to the pilgrimage. Our mythology and culture are great influences. After Gandhi watched the play 'Satya Harischandra', he tells his mother he did not like the play. He feels Harischandra wronged by giving up his wife, son and the kingdom. His mother Putlibai, who had a great influence on him, reasons it was all for the sake of truth and one must endure any hardship to protect the truth. In another instance, Gandhi is punished for the folly of his friend Bipindas in school. A remorseful Bipindas owns up his mistake. Finally truth triumphs. This is an important message for a society at the crossroads.

What do you intend to explore through this film?

Child psychologists would tell you that the childhood is an impressionable age. Many factors influence the child. I think a film on Gandhi’s childhood can start a conversation with the children, who too are going through many life experiences and dilemmas. Today, children don’t share their feelings with parents, teachers or friends as the world is getting more and more competitive. Through this film, the children will see Gandhi too committed mistakes, but he owns up his mistakes and most importantly he vows never to repeat them and succeeds in it.

Today, children are exposed to violence even in cartoons. In the US, we see teens using guns, getting involved in violence. I feel as a society we can adopt new technology but should not give up our core value system.

When will the film be released?

We will be celebrating 150th birth anniversary of Gandhi on October 2, this year and I want to remember Gandhi again through this film. My film, covering Gandhi’s childhood from 7-13 years, will be in three languages—Kannada, English and Hindi. I hope to reach the larger audience as it is an important story for the current and all the future generations too.

How relevant is Gandhi to the present day?

Through this journey, I felt the Gandhi legacy waning. In Rajkot I could feel it. The approach to the house (now a museum) was narrow and people did not seem enthused with Gandhi, perhaps owing to the politics and Sardar Patel (who many in Gujarat believe did not get his due). When I went to Cairo (Egypt) with my second film, I was interacting with the locals there. I came to know that they knew Amitabh Bachchan but not Gandhi. These two incidents set me thinking about this towering figure of Indian history, who was sliding away from popular culture and the newer generation. Gandhi is relevant today and he will be tomorrow. I am not referring to the political figure, but Gandhi, the human being, his value system. Gandi can never be outdated.