A school then, a museum now 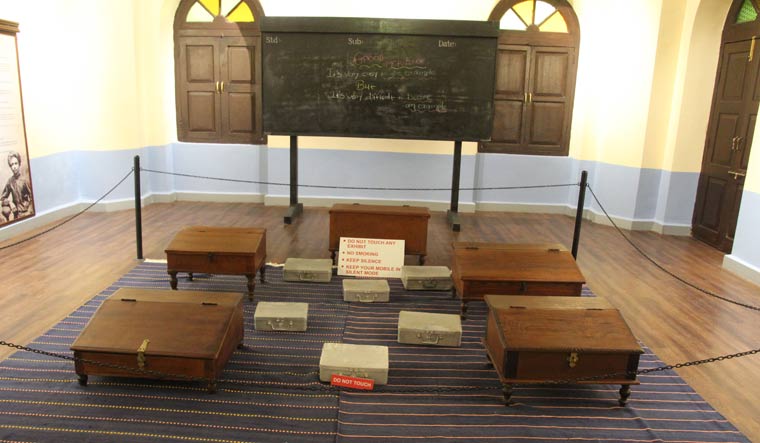 The two-storey building is divided into 39 galleries | Janak Patel

In 2017, a controversy erupted when it was decided to close down Alfred High School, Rajkot, alma mater of Mohandas Karamchand Gandhi. Today, more than a year later, the decision to convert the school into a museum seems to stand vindicated with the number of footfalls per day surpassing the number of students in the school at the time of closure.

In the sprawling building, spread over 600 square metres, the student count touched just over 100 when the Rajkot municipal corporation decided to close down the school. Out of over 100 students, hardly one third attended the school regularly. The students were admitted to the nearby Karan Singh School.

Today, the school, located in the Jubilee Chowk in the heart of Rajkot, constructed by the then Nawab of Junagadh during the British era is home to a museum, one of its kind, for people of all ages.

Says Rajkot Municipal Commissioner Banchhanidhi Pani, “It is the most important location in Rajkot. The footfall is good and foreigners are also visiting the museum.” According to him, they are targeting the youngsters so that they can become aware about the events that shaped India's freedom struggle and brought changes in Gandhi's life.

Set up at a cost of Rs 26 crore, the museum is a collaborative effort of the RMC, Gujarat government and tourism ministry of India. The light and sound show at the venue is also popular.

An added attraction to the museum is a souvenir shop. Pani says soon they will launch an organic food store at the museum.

The entrance to the museum is through a hall in which a group of children are seated facing Gandhi at a prayer. The ambiance of the place takes you to a different world altogether. There are seats available in the room to sit for a while and local guides are more than willing to explain to you about Gandhi's life showcased at the place.

Having cleared the interviews and now recruited to various posts, each day has been a learning experience for them. Says Hiren Katelia, a system operator, “I studied Gandhi in school but here every day I am learning something new.” A fresh graudate, Dwita Pithadia probably would not have dreamt of a better job than this.

“I studied about Gandhiji before appearing for the interview. But here in the museum you get to learn so much,” she says.

The two-storey building is divided into 39 galleries. The ground floor showcases events in Gandhi's life, beginning with his birth, marriage to Kasturba, the train incident in South Africa, the Kheda Satyagraha and Dandi March to India becoming independent, among other incidents.

The first floor is devoted to the principles that Gandhi propagated and practiced—truth, chastity, control of the palate, non-violence, non-possession, fearlessness, non-stealing, dignity of labour, and equality of religions. All this in form of statues, audio visual clips, drawings and much more.

The museum also has some original letters of Gandhi and also throws light on the relationship between him and Sardar Vallabhbhai Patel.

You can also listen to speeches of Gandhi and try your hand at the Gandhi quiz.

In the museum, there is also room where Gandhi studied. Though the benches are new, they are of the types used during his times. School bags, rectangular in shape made out of aluminum, have also been kept.

About two kilometer away from the museum is Kaba Gandhi No Delo, the residence where Gandhi lived when he was studying in Rajkot.

The roofs, the floors, in fact everything, has been redone as the building had got dilapidated, says the caretaker.